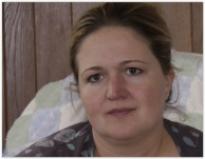 Sally was invited to join the study as this was her first pregnancy and she was an older mother. The monitoring did not reveal any raised blood pressure. Sally’s son was born by caesarean section.

Sally found it reassuring that she could self-monitor at home after giving birth.

Sally found it reassuring that she could self-monitor at home after giving birth.

View topic summary
SHOW TEXT VERSION
PRINT TRANSCRIPT
It was almost the self-assurance as well to be able to do it and know, keep an eye on myself while I was at home because you, especially when you when you stay, I stayed in hospital for four or five days and you’re so tested so rigorously there, suddenly you come out and you’re doing your own medication yourself and it was just another self-assurance really to. See that your blood pressure is doing okay.

Because I know, on the last day of being in hospital, I was meant to go home and they, suddenly my blood pressure shot up again and it was just, they don’t know why.

But then that did drop back down but it was just the, almost again, just to check it yourself.

Sally’s research midwife joined her in the ‘routine’ antenatal appointments, which saved her having to get time off work to go for a BuMP study meeting.

Sally’s research midwife joined her in the ‘routine’ antenatal appointments, which saved her having to get time off work to go for a BuMP study meeting.

View topic summary
SHOW TEXT VERSION
PRINT TRANSCRIPT
I saw midwives up in [town] there’s a birthing centre, so it’s not at a main hospital but it’s a midwifery run centre.

Which is very good and we went along and saw the midwife and did the usual check-ups and things and [research midwife] came along to join in with those, some of those check-ups along the way. So rather than having to keep going back to hospital for different meetings or different check-ups, she would actually join the meetings together, so it would, along with an appointment for the midwife, then [research midwife] would come along and do the BUMP analysis, at the same time, and just extend it maybe by half an hour.

Which is easier when you’re needing to get time off of work so you can combine the appointments together.

Okay. So you found that really helpful?

Yeah, that was good because it, that’s the difficult thing trying to justify time out of work, even though you have to, for, an, an employer has to let you go for maternity appointments, it’s trying to justify that time off and explain why.
Previous Page
Next Page