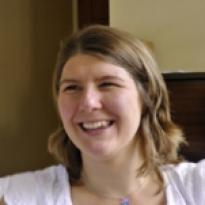 Age at interview: 33
Brief Outline: Nicola has epilepsy, she was cared for during her first pregnancy by a Special Pregnancy Unit. She developed pre-eclampsia and had induction with epidural at 37 weeks.
Background: Nicola is a full-time mother and her husband is a solicitor they have one child aged 15 months at time of interview. Ethnic background: White British.

Nicola was admitted to hospital with suspected pre-eclampsia. She didn’t like the ward environment, but was told she had to stay on one because she has epilepsy and so doctors thought she was at greater risk of having a fit.

Nicola was admitted to hospital with suspected pre-eclampsia. She didn’t like the ward environment, but was told she had to stay on one because she has epilepsy and so doctors thought she was at greater risk of having a fit.

View topic summary
SHOW TEXT VERSION
PRINT TRANSCRIPT
The risks - my blood pressure was actually fine, but the pre-eclampsia - what they thought was pre-eclampsia starting was in the, was the protein in my urine, which had reached four, which is apparently incredibly high. All these things you discover. And he said, "I want you to go home and be back by 3.30 to book - you know, to - and you're not going anywhere, and we'll see how you are when we deliver the baby.” So gone were all thoughts of how I'm going to have this baby. I was sort of, "Oh my God, the nursery's not ready. I haven't bought the sheets and" you know. So I go home and teach my husband how to work the washing machine.

Was he with you?

Yes. Which was actually not - because we went so often, and he works, you know, a reasonable distance away, he was with me because we thought we were going to go and see an anaesthetist and things, whereas a lot of them I'd been to on my own, or my mum had taken me to a couple, and you know. So that was a fluke, really. And we went out and had a nice lunch, came home, packed, and in I went and cried my eyes out. But the reason they were worried about the pre-eclampsia - I missed that bit - was because pre-eclampsia can trigger seizures. And that is the, that is what happens, if it gets very, very bad. And with my tendency to seizures anyway, they were worried about the two, which was why the professor said, "You're staying in", and the registrar had thought we might think about it for a while. And so I arrive, and they can't put you in a room on your own, which a lot of the, you know, people on this special floor were in, because I might have a seizure. So you can never be on your own, so you have to be in a ward with four of you. So, which, you know, is fine, but I was distraught, just beside myself. And it was horrible in there, just ghastly. And it was sweltering, absolutely sweltering. And we were - the one godsend was that the hospital has beautiful gardens, and every night my husband came with dinner. So he'd go to work, come home, cook dinner, put it in the car and bring it up, and we'd have a picnic every night.

Nicola had an intense headache and felt very sick soon after she gave birth. She’s unsure whether this was linked to her epilepsy, her pre-eclampsia, the stress of the situation or the medicines she was given for delivering the placenta.

Nicola had an intense headache and felt very sick soon after she gave birth. She’s unsure whether this was linked to her epilepsy, her pre-eclampsia, the stress of the situation or the medicines she was given for delivering the placenta.

View topic summary
SHOW TEXT VERSION
PRINT TRANSCRIPT
I don't know whether it is related to the epilepsy, but in my - I sort of imagine it does, because of the amount of drugs I have in my body. But I sort of had a bit of reaction to that. I also had a reaction to the drug they give you to, so that you deliver the placenta. And everything I'd worried about, about having epilepsy, sort of came about afterwards. Having felt absolutely fine, I then went into the most terrible post- - well, what I would describe as a post-fit headache, which is what I get after a seizure. And it's like a migraine, it's terrible, in one place, want to curl up in a ball. And that came on very quickly after I'd had her, and I didn't really hold her for the rest of the night. I mean, I was just curled up in a ball, and in the end I had to ask the - I felt sick - although I wasn't being sick, I felt sick with this headache, and I had to ask the midwife who'd then taken over the shift, you know, I had, "You're going to have to give me something, to get rid of this sick feeling and this headache, because I'm not going to be able to take my epilepsy pills at ten thirty, and I need to take them, not only because I need to take them, but because I've just given birth and I'm exhausted, and I don't want this to start perpetuating.” So they had to give me something, and then I, after, you know, I was ready to go to the ward.

Nicola had mixed emotions when she returned home. Her husband was back to work but her mum was able to offer lots of support.

Nicola had mixed emotions when she returned home. Her husband was back to work but her mum was able to offer lots of support.

Two and a half weeks.

Two and a half. How did it feel then walking in through your front door?

Well, when I left the hospital I cried. I was incredibly, incredibly nervous. Just - I was actually very scared. Because I'd been there so long I'd become sort of institutionalised, really. And yeah, and then wonderful to be home – but it, I had felt very secure there, and I’d been there so long everyone knew my name, and you know, all of that. All the nurse, midwives would come in, "Oh hi, how's [baby] doing this morning?" You know. So yeah, mixed emotions. I think, you know, a lot of my friends couldn't wait to get out, because they'd hardly been there and were through the front door and it was all - I was actually very - and because of all the fuss, you know, the problems beforehand, and also with her afterwards, when she was unwell, my husband only had three days paternity leave, so that had gone, so we had – well, he had half a day at home and then had to go back to work, so that was all a bit of a stress. I mean, I have a super-granny, my mum. So that was, she stepped in. But it wasn't how we had - and I'm a real planner, I’m a - so it wasn't how we had planned it. You know, we imagined that we'd have a few days at home on our own, and then my mother would come, and you know, that kind of thing, so.
Previous Page
Next Page