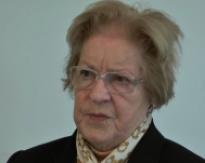 Age at interview: 81
Brief Outline: Anne has been interested in health research and has been a patient and public representative for many years. She is particularly interested in research that looks at how the environment influences health. She is a Fellow of the Royal Society of Medicine and a member of the Institute of Physics.
Background: Anne has worked in optics and was a specialist contact lens consultant. She later moved into health research and physics. She is widowed. Ethnic background: White British.

Anne first became involved in PPI when she joined the Dementia and Neuro Diseases Research Network (DeNDRoN), a neurological research group that has branches all around the UK. She has a longstanding interest in health research having worked in optics and in physics research. At the beginning she had no expectations about what PPI would involve and was willing to take on any opportunities. As she has become more involved, PPI has become more important in her life.

Her PPI role has involved chairing meetings, reviewing participant information sheets for researchers and discussing with other members what types of research should be done on certain illnesses. She was involved in a campaign to encourage members of the public to donate their brains to help neurological research and was thrilled when the idea she proposed for the flyer was accepted by the research team.

Anne thinks the goals of PPI are to improve public health and reduce illness and disease. She sees her involvement as a way of accessing people with health problems and influencing researchers’ views on what factors are important when it comes to health. To take part in PPI, Anne said people need to “have an analytical brain, a willingness to talk openly, a willingness to think laterally and empathy with patients.” They should also be keen to talk and listen, taking on board other people’s ideas and providing some of their own.

As a message to researchers, Anne asked that they ask more questions and remain open-minded. She is keen to be involved in research looking at the effect of the environment on health. She would encourage other members of the public to take part in PPI, saying other people’s ideas would be welcomed. She thinks television programmes should aim to educate the public about science and research, and that this may encourage more people to become patient and public representatives.

Anne was delighted that her suggestion for a picture to illustrate a leaflet about brain donation was taken up.

Anne was delighted that her suggestion for a picture to illustrate a leaflet about brain donation was taken up.

View topic summary
SHOW TEXT VERSION
PRINT TRANSCRIPT
Yes I'm often asked from [place name] to assess documents and comment on them because, as you've just said, they come from academics, they're written in academic speak but they're for the members of the public. So I'm sent these to criticise, which I do, and correct and put words that the public, who are going to be reading the documents, can look at. Another thing I've done which I was very pleased was picked up, and this was, sorry I've moved…

…a couple of years ago. This is about brain donations, and it is, of course, a very difficult subject to talk with, with patients. But sometimes they raise it themselves but if they don't we now have a document, a nice little document, nice text and it needed some image and I didn't like the image they'd got so wearing my twenty year old, when I was twenty, advertising hat. I thought, 'How nice it would be to have an image with people putting their hand up. Yes me please, me please, yes and me,' and the image has white arm, brown arm, tan arm, other coloured arms, long arms, short arms and they've used it, PPI for DeNDRoN [Dementias and Neurodegenerative Diseases Research Network] getting people in to donate brains. I hope they might use it for other donations but I was thrilled to bits about that.

Her interest in the link between a rare condition and possible environmental factors has led Anne to write a paper with a professor of epidemiology.

Her interest in the link between a rare condition and possible environmental factors has led Anne to write a paper with a professor of epidemiology.

View topic summary
SHOW TEXT VERSION
PRINT TRANSCRIPT
And this is where I'm working with, happily, a professor of epidemiology, at a very large southern university, and he has looked at all these statistics. He's also, in his position, been able to access, what's called the Ten Europe Study. This is these rare conditions, ten European countries have input their data, he has access to that and this is showing some very, very extraordinary statistics. So he and I have been working together, I’m very happy to say, for a few years.

OK and what have you been doing with him in terms of work?

Well he's been looking at the various factors of rare neurological diseases. He's been advising me on many of my presentations and at the moment we have a joint paper in, which is being peer reviewed at the Royal Society of Medicine.

On a particular rare neurological disease.

And how did it come about that you ended up writing a publication with him?

OK. And what's that been like writing that with him?

Oh marvellous. The fact that somebody had listened and I'd been down to his department and we'd had meetings there and I've picked up a particular factor which has not been addressed, if at all, in the UK. I'll give you the background to that. I've been mapping these cases for years and I need to know how long the person's lived there; I need to know a lot of factors about the environment, and as I map these cases, and I won't tell you which counties, but it runs to hundreds of cases, patterns have emerged and these do link in very strongly with a particular environmental non-ionising radiation source. Now this is just anecdotal except that I've been able to have these areas measured by professional teams under NDA, which is Non-Disclosure Agreement and he has seen these maps and really the fit is so extraordinary. When you get in a very small area you might get a line of cases running up the country for many kilometres, there is a reason for that.

Science programmes on TV could help raise awareness. Anne suggests recruiting through University of the Third Age and the Women’s Institute.

Science programmes on TV could help raise awareness. Anne suggests recruiting through University of the Third Age and the Women’s Institute.

View topic summary
SHOW TEXT VERSION
PRINT TRANSCRIPT
Well one thing I'm going to suggest Anne-Marie, and you might think it's strange but it could be very, very helpful. You know that television programmes like Horizon and Panorama deal with the serious side of science. If we could get somebody there to pick up on what PPI does and can do and will do and has done, then you're straight away through to millions of people who will think, 'Ah, well maybe I should be part of this, maybe I can do something.' Ah, yes there are links on the Web but I'm thinking a much greater and a more visual thing with some scientists as well, would be a very good idea. It would take knowledge and maybe a bit of string pulling at the BBC or ITV but it, in my opinion, it could and should be done and could lead to really great things for PPI, yeh.

And do you have any messages for anyone who's thinking about getting involved in PPI?

Yes get on board, join us. Yeah bring your ideas with you.

How would you talk them into it?

You can just do it.

There is another source which again has not been picked up to my knowledge. There's something, I'm not involved with it, called U3A which…have you heard for U3A?

Well it's ‘University of the Third Age’ and in [place name] alone we have two branches. One meets in an afternoon of one day and one in the evening and they're mainly scientists, they're mainly retired people but they've got enough brain and interest to go and attend to meetings. I think you could at PPI access U3A head office and go through, thinking of a more local approach. I'm sure you'd get volunteers, absolutely certain you would – U3A. Another one is the WI, again nothing I've ever been associated with, I'm not your jam-making housewife as you know, but you've got people there who are often carers and interested in the condition and maybe worried there might be a familial link, and there are these public bodies with interested people by definition in them. So…then there's the Scientific and Medical Network, don't know if you've heard of that? Well I was a member of that for years and had things published with that. That is, again, they generally meet in counties, have a county meeting often at a university or it might be a public hall, it depends. So you've got all these bodies of interested people, interesting people, you could access and should access.
Previous Page
Next Page