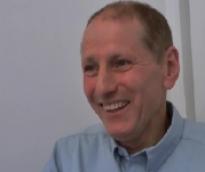 Age at interview: 67
Brief Outline: Alan has been involved in PPI in health research for about three years. He became involved after he was diagnosed with cancer.
Background: Alan is partnered. He is a retired communications engineer. Ethnic background: White British.

After he was diagnosed with cancer, Alan wanted to get involved in helping other people. At the time of his diagnosis he was introduced to a fellow patient who was able to talk to him about his illness. He decided to join a clinical trial for the drug that is currently successfully treating his cancer and found that there were many benefits to taking part in research, including what he described as ‘more scrutiny’ from health professionals.

Because he felt he gained so much from his research experience, Alan wanted others to benefit too. He became involved in a local patient and public involvement group. That group reviews research when it is being designed and also helps researchers to make sure the public information about their study is clear and easy to understand. They hold events a couple of times a year to meet with researchers and health professionals, where they encourage them to use the PPI group as a sounding board when they are designing their research because they provide a different angle.

In meetings with professionals who use lots of jargon or acronyms, Alan said people should feel confident to ask for explanations when they don’t understand something. Usually he has other PPI representatives with him in meetings so this isn’t always a problem. The others he works with are mostly like him – white and retired. He thinks there should be more effort made to ensure people who are in ‘hard to get’ groups are included in PPI. This could be done by making payments and reimbursing people’s costs for things like babysitting.

There are definite personal benefits for Alan in doing PPI: he gets to work with nice people, makes research more user-friendly for patients and hopes it will help, not only individuals, but future generations. Alan described the work his PPI group does as “just a little cog…moving in the right direction”. He didn’t think it was possible to measure the impact of the work they do, but he felt that was often true of the things we do in life.

Alan encouraged other people to get involved in PPI. He said they should try it and if it wasn’t for them they could drop out. He also encouraged researchers to get PPI groups to review their research because he said, ‘If it can’t stand a few people throwing a bit of mud at it, then it’s not worth doing anyway’.

Alan’s cancer research panel checks whether patients will understand the leaflets they are given about taking part in research.

Alan’s cancer research panel checks whether patients will understand the leaflets they are given about taking part in research.

View topic summary
SHOW TEXT VERSION
EMBED CODE
PRINT TRANSCRIPT
It's one of these groups where we, they send us somebody's research, what they're going to do. OK oh it's wonderful. You find out and you think, 'I want to volunteer for that'. Then you haven't got that cancer, but you want to volunteer for it. There are some wonderful things going on at the DNA at the micro level working altering people's DNA, who they are, changing it slightly so that they fight their own cancers. Oh it's so wonderful what these kind of research things that are going on. You find out about them first, but it'll be ten years before they do a trial and we just help by reading their lay – gosh I can't think of the word – where they put it out to the patients because they want volunteers to go on this. So we help with phrasing it so that they can understand it. We look at it from a lay person's point of view, we're not technically involved in the illnesses and we can say, "Well I didn't understand this." I particularly I find some medical word and then I Wikipedia it, see what it is and try and put it into language that I'd understand. So just little steps changing their, their ideas for the cancer and the form that they send out to people might help someone to join it because they understand it more.

Researchers need to think about how to include a wider range of people. Payment is one way to support people with different needs.

Researchers need to think about how to include a wider range of people. Payment is one way to support people with different needs.

View topic summary
SHOW TEXT VERSION
EMBED CODE
PRINT TRANSCRIPT
Oh yes well perhaps when we first started the PPI there was two of us patients and the other patient had been working in the health industry. So I had three specialist nurses for research, and her and just me as the token idiot you know [laughs] who's asking the silly questions. But that was, that's, it's OK, they sort of, you know, pat him on the head, you know, he's still sitting there when you come out trying to write down notes so he remembers or what it is.

And it's alright to ask, you know, to ask people, "Can you explain this to me?" People want to help you know but you have to ask and being in the PPI is asking for other people who are not, who can't be there because unfortunately within the PPI you get a lot of people like me, white retired people who've got time and how do we get the voices for the people who are hard to get? They've got to earn a living, they've got to go out there and, and they've got children, they need babysitters and they can't just afford financially. We've got to find a way of getting their voice heard somehow – that's another little bone that I've picked up on. That I'm gnawing on.

And have you any ideas about how to do that?

Well I think, I mean when we have our meetings, they're great meetings if you want to get involved in PPI. We start at eleven o'clock, we have lunch and finish at two o'clock. That's a great work day [laughs]. And they do help us out by giving us fares and we can claim back fares and things like that and they make it quite easy. I don't personally because I've got a bus pass you see, but young people they've got to get there. I think there might be something where they can give some sort of amount of money, which isn't working, I don't know, fifty pounds a day, you know, just, just to so that they can pay someone to look after their children. I don't want it to be, become an industry where it's a factory. But we're going to get the same boring people that retired, people who've got the time and the inclination, we've got to get to people joining PPI who can't do it. We've got to make it, we've got to like we do for the disabled, we enable them by putting slopes there for the wheelchairs and we have now enabled people so that they're in our society more. And we've got to do the same for this with the PPI, we've got, their voice has got to be heard in the medical bits and so the way to enable them is to have some kind of little bursary that when they come to meetings they can do it without financial loss.

And people who are on your group are they all similar to you, that you know you said that usually people are white, retired, you know I don't know if you said middle-class?

I didn't say middle class but [laughs] I don't think I'm middle class, see? A builder, you know, doing, digging the trenches and things you know.

Alan has changed his mind. He used to think payment would attract people ‘for the wrong reasons’ but now thinks it’s essential for some.

Alan has changed his mind. He used to think payment would attract people ‘for the wrong reasons’ but now thinks it’s essential for some.

View topic summary
SHOW TEXT VERSION
EMBED CODE
PRINT TRANSCRIPT
No I don't see any barriers except the financial one which I've thrown up already that people… there might be a case for it to get some sort of payment. You have to be applied for and at first, as I said, I was so much against it because you might get people joining for the wrong reasons. But I can see now that it, there is a place for it that there's some sort of thing and where people might want to lose their benefits, oh gosh. So it must be some sort of gratia payments that somehow – I don't know how but people who are cleverer than me can work it out where they're signed for, but they don't have to pay tax on it because it's, it's going back into society. It's helping, there must be a way that they're not going to lose their child benefit or whatever benefits they're getting, they're like the bottom, but their voice has got to somehow be got to.

Alan doesn’t think we can measure the impact of PPI because involvement is just a little cog in the research machine.

Alan doesn’t think we can measure the impact of PPI because involvement is just a little cog in the research machine.

View topic summary
SHOW TEXT VERSION
EMBED CODE
PRINT TRANSCRIPT
Is there any way of knowing how much of an impact it has?

No not really. I think, I think we're just a little cog in, with, it's just that we're moving in the right direction. If there's enough of us moving in the right direction, just putting a word in. You don't, we never know you might meet somebody who might have been going down the road where they were going to top themselves, you know, commit suicide because they can't see a way out. And just one little word and saying, "Oh have you thought of joining this group?" You might have saved someone's life, but you'll never know whether you saved someone's life by saying that to them. But it's just helping people and it's not helping individuals.
Previous Page
Next Page