Parents of children on the Autism Spectrum 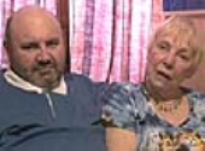 Age at interview: 80
Brief Outline: Barbara's son Howard, 53, was diagnosed with autism when he was in his teens. He worked at a bakery for over twenty years, then returned to university where he did an HND in computer science.
Background: Barbara, a retired social worker, and her son, Howard, live together. Ethnic background/nationality: White British

Barbara, aged 80, lives with her son Howard, aged 53.  Howard was diagnosed with autism in his teens after Barbara read something about autism and went to the doctor’s to get a referral for diagnosis. Howard also has diabetes and asthma.  Barbara’s husband left home before Howard was born and Barbara has cared for Howard since then.  Howard was diagnosed as having a ‘disability of the mind’ when he was five years old and spent time in a hospital for the ‘mentally deficient’ when Barbara was in hospital having an operation.

As a child, Howard would line up the pots and pans and would never make eye contact.  She describes him as a fractious and difficult baby and he had severe tantrums during his childhood which were difficult to manage.  When he left school, Howard worked as a post office cleaner and then at a bakery for twenty one years before he was made redundant.  He was bullied at both school and at the bakery and dealt with this by developing a very good sense of humour.  About seven years ago Barbara and Howard signed up for part time computer courses and became hooked; Howard became so proficient that his tutor’s nicknamed him “cyber-junkie”.  They both gained BTEC diplomas in computer studies and three years ago Howard graduated with an HND in computer science.

Howard has a strong interest in trains and buses and enjoys going to vintage rallies and playing on his train simulators.  Barbara describes how Howard is great company and is kind and affectionate.  She thinks her father was probably on the autistic spectrum as he was an eccentric character with an incredible memory for facts and she herself has some ‘traits’.  She gets cross when people talk about ‘suffering from autism’ because she thinks that people on the autistic spectrum have a different type of mind which flourishes within a virtual world.

Barbara describes how Howard had no worries about talking about the details of his operation.

Barbara describes how Howard had no worries about talking about the details of his operation.

View topic summary
SHOW TEXT VERSION
PRINT TRANSCRIPT
It is like the time he had he had un-descended testicles, didn’t you? And he was going to school then and he had to have an operation after, worrying doctors to death, because of course in those days it was, oh because he has learning difficulties it is not worth, you know they wouldn’t consider them for operations or treatment or anything. So in the end they took him into hospital and I said, “Well…” I thought he would be embarrassed at school with all the boys in the class. What on earth would he tell them? So I said, “Howard, what did you tell them?” “Oh I told them I was going into the hospital and have an operation for un-descended testicle.” So it was me that was at fault, not Howard. Howard was OK, weren’t you lovely?

View topic summary
SHOW TEXT VERSION
PRINT TRANSCRIPT
Barbara' Things like that, like. Oh and I say to you, “I love you,” and he will say, “Yes, I love me too.”
Howard' [laughs].
Barbara' They say there are a lot of things that autistic people can’t, or can’t do, but they can learn it. Certain things that we can do you know, you know learn automatically, it comes to you automatically, it doesn’t with autistic children, but they can learn it because you have over learnt with a lot of things that you do. You know. He is marvellous. And as I say his sense of humour, well I don’t know where that comes from. I don’t know where that comes from. It is terrific.

Barbara gets cross when people talk about cures and suffering from autism.

Barbara gets cross when people talk about cures and suffering from autism.

View topic summary
SHOW TEXT VERSION
PRINT TRANSCRIPT
Barbara' And even in The New Scientist there was something about autism but it was something that I have already written about on the web to one of these organisations. And I have seen people write since. You know they say they want a cure. Well there is no cure. And then they say ‘suffer from’… Well I can’t see it is suffer from. I think it is a different type of mind. I think you know, with all the technical stuff, computers, Howard is so good on a computer, because it is in a virtual world and because he has such concentration. Now most of us, you know, we haven’t got good memories because we are sort of diverted. Our minds are diverted so I mean. He has got to concentrate on one thing at a time so when he is on the computer he is better than the average person, because his mind is just going in one direction and I think that perhaps could it be, oh this wasn’t in The New Scientist but I sometimes think could it be that in autism they are trying to prepare future man for technology, future technology because yes. I am cross. You know I took to computers and I have got a little bit of something like that in me haven’t I?
I am sure Dad…. There was an old judge, Temple Morris, all his sons was an MP and he used to love Dad and talking with Dad because Dad was so knowledgeable although he had never had any education but he had read a lot and he used to call him, ‘Whitaker’s Almanac’ that was a nickname. We always get nicknames don’t we?
Howard' Yes.
Barbara' So Dad, Dad was clever in that way as well you know and as I say he was supposed to delicate and eccentric but … hm.
Previous Page
Next Page