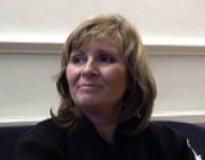 Age at interview: 44
Age at diagnosis: 36
Brief Outline: Diagnosed with Hodgkin's Disease in 1998 after losing weight and finding a lump in her neck. Treatment was chemotherapy followed by radiotherapy to her chest, which put her into remission.
Background: School learning mentor, divorced with three children aged 16, 14 and 9. Ethnic background: White British.

In 1998 she felt a lump in her neck; she had also lost about three stones in weight. She went to her GP who suggested she use her private health insurance to obtain an urgent appointment with a specialist. The next day she saw the specialist, who found lumps in her chest and arranged for a biopsy to be done. This proved that she had Hodgkin's disease and she was really taken aback by the diagnosis.

She was treated with chemotherapy (ABVD) fortnightly for 12 sessions. After a gap this was followed by radiotherapy to her chest five days a week for a month. This put her into remission and she has since attended regular follow up appointments, which have now become annual.

A year after her diagnosis she felt pains in her chest and bones and panicked that the cancer had returned, but was reassured after being shown that her chest x-rays were completely clear. After it was all over she decided to go for counselling to try to come to terms with having been through a life-threatening experience because she felt it had 'knocked her off her feet'. Seven years later she is still in remission.

Felt so shocked and numb that she couldn't take in everything the doctor was saying about the...

Felt so shocked and numb that she couldn't take in everything the doctor was saying about the...

Tell me a bit more about how you felt when you were first diagnosed, emotionally?

Mm when, yeah as I say, when I was told, when I was given the diagnosis it was seven years to the day that my dad had died of lung cancer so it seemed a bit, you know, all a bit unreal. I remember my husband and I walking out of the surgery like Thunderbirds puppets, we were kind of, we didn't really know what had hit us. I looked at him and his face was white, everything had just drained completely. And my first thought as I walked out was, 'I'm thirty-six years old, I've got three children and I'm going to die'. I think that was the only time I ever said that though. After that I thought when I gained more information and I spoke more to people about it I didn't feel so, but at first it really knocked me sideways. We went to the pub actually, my husband and I, and I had about three vodkas or something. No effect whatsoever because we, I was just, I was in, my head was in another place. I thought, 'How can this happen?'

So how was it, do you think, they let you go away thinking that you might die when in reality with Hodgkin's disease hardly anybody dies?

And it was some time later till you were given you enough information to understand that that wasn't the case?

No he did say that there's an eighty percent success rate with the treatment, but me being me was thinking of the other twenty. So, but no he did, he did give me information but I was too numb to take it in at that time. I couldn't, as I said, I was picking out words like 'remission', 'chemotherapy', 'cancer', and it was all, it was so surreal, it was all unreal, it was incredible. It was the last thing that I expected. Although I kind of had an inkling when I found the lump, I didn't actually expect him to be sitting there saying that to me. It's very odd, it's very odd how you kind of, you're sort of fighting with yourself with it.

Found it painful having two black dots marked on her chest to line up the radiotherapy machine...

Found it painful having two black dots marked on her chest to line up the radiotherapy machine...

View topic summary
SHOW TEXT VERSION
EMBED CODE
PRINT TRANSCRIPT
And I got tattoos from the radiotherapy as well, two black dots on my chest, because you have to be exactly in the right position every time you go. And I was quite shocked when the nurse did it because she said, 'Oh you're going to feel a sharp prick in your chest now' and sort of dug the thing in and out again and it was like, 'Uh' it hurt a lot. But yeah what else?

So have you still got those marks now?

They're there for life, my two black dots on my chest.

Does that bother you?

Broke down in tears when she was given the first drug because it brought home the reality of the...

Broke down in tears when she was given the first drug because it brought home the reality of the...

View topic summary
SHOW TEXT VERSION
EMBED CODE
PRINT TRANSCRIPT
And for one, for a person who cries a lot, as I say the only time I really went to pieces was that first day in the hospital when I took the first drug, because then it really, I kind of think I was just floating along with it at first because everything happened so quickly. And then to actually be faced, when I actually took something or something happened, that just made it real, more real, it just made me kind of, 'Oh my God this is really happening to me', because everything was kind of, was it really real? You know, I'm floating along, people are telling me things, but is this actually happening to me? I don't know, but then yes it was.

Her 9-year-old thought that she wouldn't be able to collect him from school without hair; a...

Her 9-year-old thought that she wouldn't be able to collect him from school without hair; a...

View topic summary
SHOW TEXT VERSION
EMBED CODE
PRINT TRANSCRIPT
When I came home from the hospital after I'd had the biopsy done, the kids came home from school, they didn't know anything about it, and I remember my oldest, who was, what was he? - nine at the time - he looked at me and he said, 'What's happened mum, have you got a tumour?' And I really couldn't understand where that came from, which was quite spooky as well really. Anyway we realised that we'd have to tell the children, I didn't particularly want to because all their experiences of cancer had always been so negative, and of course you try to protect your children as much as possible. So we decided to tell them over lunch one day and we just said that mummy is going to have to have some treatment, I'm going to have to go into hospital for my first lot of chemotherapy, and just sort of laid it on the line to them really.

And it was very strange because my eldest son stood up and he said, 'But mummy you won't be able to come and pick me up from the playground if you've got no hair'. So I said, 'I think that's the least of our worries don't you?' And then my second son stood up and said, 'What difference does it make as long as she's going to be OK?' So that was their reaction, which was quite sweet really. And my little one just, he doesn't know what's going on half the time anyway.