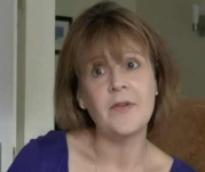 Age at interview: 43
Brief Outline: Helen’s fourth pregnancy following the birth of her son and then two early miscarriages. At her 20 week scan severe problems were identified and she was told her baby was unlikely to survive. Her baby died following a high-risk procedure to try and help her, she was stillborn at 23 weeks of pregnancy. Helen was 37 at the time.
Background: Helen is married and has given birth to two children. She is a lawyer.

Helen had no problems in her first pregnancy apart from gestational diabetes and she gave birth to her son. However, she then had two early miscarriages at 8-10 weeks of pregnancy and was very anxious when she became pregnant for a fourth time. Her early scan showed no problems but at 20 weeks her second scan showed her daughter Emily was not growing normally. Helen was referred to a specialist hospital for further investigation. Emily’s condition was found to be very serious and the consultant obstetrician told Helen that her chances of surviving and living a healthy life were very low. The consultant suggested Helen consider a termination of her pregnancy but also suggested another alternative of having a very high risk procedure that could help. Helen and her partner had a week to decide what to do which was extremely difficult. But Helen’s Catholic faith guided her towards undergoing the high risk procedure which she had at 23 weeks of pregnancy.

Helen had felt Emily move frequently during her pregnancy but on her way home after the procedure she felt nothing. The next day she went to her local hospital where doctors could only find a very faint heartbeat and told Helen her baby was dying. Her daughter’s heartbeat grew fainter and two days later Helen returned to hospital to have Emily’s birth induced. Helen found it really helpful giving birth in a bereavement suite away from the rest of the delivery suites. Helen was able to spend time holding Emily and making mementos of her life. As Helen gave birth at 23 weeks and 4 days of pregnancy, she was not entitled to maternity leave which she would have received at 24 weeks. Helen found this particularly hard and although she went back to work after 6 weeks sick leave, a year later Helen had severe anxiety and depression and was off work for 6 months. She is now back at work and found talking to other mothers who have experienced the loss of their baby particularly helpful.

Helen described her experiences after undergoing the high risk procedure to help her baby.

Helen described her experiences after undergoing the high risk procedure to help her baby.

View topic summary
SHOW TEXT VERSION
PRINT TRANSCRIPT
Then we've got to go for this risky procedure, this small chance of helping her.

And so we went back the next week. We told her our decision. Or my decision. Again, that caused problems. Because as the mum I had a bit - it wasn't an equal decision.

My husband couldn't force me to do it, even though that's what he wanted. It was my - ultimately my decision. So that was a bit tricky between us. But the doctors of course were completely professional. They understood - you know - why. You know, "We're not going to terminate." "Why?" "Because I'm Catholic." "Ah, right." They took that. They knew that was a cultural religious reason.

So I was twenty three ish weeks then. And up to that date, I'd been feeling the kicking. And obviously because it wasn't my first pregnancy - she'd been kicking - I probably knew what was happening from about eighteen weeks. And she was quite - she used to kick quite a lot, you know, so I knew when she was kicking. My husband had driven up, because getting the train was too traumatic for coming home again after such a thing. So we were driving home. And - it was March, it was cold, yeah. It was wintry type weather. And it was - by then it was peak hour traffic, and so it was all stop start.

So I was - you know - relaxing in his car, in the passenger seat. But as the journey went on, the slow journey, I realised that there was no kicks. And usually if I was just lying still in a chair like I was, I would feel kicking.

So I told my husband that. And he's like "Okay, well - you know - they did warn us about this." Because they did warn us this might happen, that Emily would not cope with having the needle inserted. Okay. But overnight, still no kicking. Still didn't feel any kicking. So, next day, "Okay, we need to call our local hospital now, and say." So we went in. I think by then it was a Saturday. So they were a bit reluctant to call us in, because of course I was only twenty three weeks. Not everybody at that time feels kicking. So they were a bit, "Really? Do you want to come in?" But eventually I think between me and [my husband], we're like "No, we have to come in. You know, I know you're busy or what have you, but we have to come in. We have to be put on a monitor and find out if you can hear the heartbeat."

So, that was Saturday afternoon. We went up there. And I was strapped to the monitor. And again, the same old thing - you know – from the sonographer days. The Consultant came in, like "Ah, okay" You know, just treating you like a normal worried mum at twenty three weeks. "Okay. Well come on, lie down, we'll strap you up. I'm sure we'll find a heartbeat, I'm sure there's nothing to worry about." Laid us out. And again, it was busy. But eventually they brought the machine to us. You know, it must have been a midwife and the whoever, whichever doctor was on that day. So the midwife, who would normally hear the heartbeat, couldn't. So she had to call in the doctor. So eventually he came in. And very - And it was an old machine that they'd just had to find. But he could just hear a heartbeat. But as he said to us, "It's really faint. So, I think - based on what's happened to you, where you've been, and what's happened - what will happen is, the heartbeat will just get fainter and fainter. And eventually the baby will - your baby will die inside you. And then you will have to deliver the baby." You know? So, [sigh]. Horrendous. Awful. So. That is what happened. So they booked us in then to go in on the Monday, and to listen again. And by then, there was no heartbeat. Then they booked us in to come in on the Wednesday to have the - be induced, effectively. Have the drug to be induced.

View topic summary
SHOW TEXT VERSION
PRINT TRANSCRIPT
And, but because - Also, what that charity had done - Of course I knew my local hospital, I delivered my son there, three years before. But what I hadn't realised - the delivery suite, double-doored, you go into the delivery suite - but to the left of that was a door. Which looked like it could be a cleaner's cupboard, or an office, or - you know - it's not a door you would take any notice of, because there was no sign on it. But there, what this midwife had managed to do was set up a room. So that's where we were sent, the Wednesday that we went in to have our induced - medicine - that I was given that. We weren't sent into the delivery suite, which of course would have been awful for me, and traumatic. We were sent into this room. Which was like - set up like a bedroom. It was a sort of a halfway between a bedroom and a sitting room, a living room. So it had a bed, a comfy bed. With, with bedding that you would have at home, not hospital bedding.

It had tables, chairs, a TV. It just - basically, we were going to have a hellish Wednesday, but we were in this room that we could lock. We were given a key to it, so if we wanted to go to the café we could. It was our stuff. It was our room while we were delivering Emily.

And that room, really. We couldn't have done it - if that - If we hadn't have had that room, it would have been an awful day. And of course my family didn't know we were going to be in that room. They knew we were going to the hospital, they thought we were going to be dumped in a hospital delivery suite. We weren't. And so they were really pleased by the time - I think I maybe probably texted and called them from the hospital. But when I had a real chance to tell them that we had been in this really nice room, decorated beautifully, a real home from home, they were really pleased to hear that that was on offer to us.

Helen found the only people who really understood her grief were those who had also experienced loss.

Helen found the only people who really understood her grief were those who had also experienced loss.

View topic summary
SHOW TEXT VERSION
PRINT TRANSCRIPT
Because I think going through something like that - my Mum didn't get it, she'd never lost a baby at that age. My husband tried as far as he could to get it. My sister didn't get it. Nobody got it. The only people who got it, as far as I was concerned at that time, were people who'd been through it, had lost a baby either at term or certainly beyond twenty weeks.

You know, whereas my Mum and my sister and my friends wanted to know - they wanted to help, and they wanted to support, but they didn't know what questions to ask, they didn't know - Well, and also sometimes I didn't want to talk about them. I just wanted them to get it. I wanted them to read my mind. Whereas the women that had been through it, could read my mind because they'd been there, done it. You know? Might be a completely different reason why they lost. But they knew what it was like to be having conversations like that with NHS professionals, which you don't want to be doing.
Previous Page
Next Page