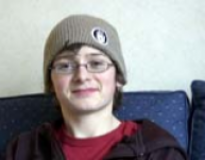 Age at interview: 16
Age at diagnosis: 11
Brief Outline: Andrew has type 1 diabetes and Coeliac Disease. He was diagnosed first with type 1 diabetes when he was 11 years old and was diagnosed with Coeliac 3 years later. He changed his insulin regimen and he finds that the short-acting and long-acting insulin regimen gives him more freedom to choose when and what to eat. He needs to have a gluten-free diet because of his Coeliac which means that he cannot eat wheat, oats, barley and rye. Says that his mother makes very good gluten-free cakes!
Background: Andrew is in high school and lives with his parents and sibling. Ethnic background/nationality' British.

Andrew was diagnosed with having Type 1 diabetes when he was eleven years old and remembers it came as a bit of a shock. He says that what he found hardest was to get used to constantly having to keep an eye on his blood sugar levels and learning about how to control it. He says that the medical team where he lives is very good, and that they have taught him everything he needs to know about how to manage his diabetes. Initially nurses came to his house to give him advice and support.

In the beginning he started to inject insulin twice a day but now he injects fast-acting insulin every time he eats and long-acting insulin at night. He finds his new insulin regimen better because it gives him more freedom to choose when and what to eat. In his initial regimen he had to eat every two hours regardless of whether he was hungry or not.

His school is very supportive and there has never been a safety issue about him carrying his insulin kit and blood sugar tester at school. Initially other children did ask him if 'diabetes' was contagious!

At the age of fourteen he was also diagnosed as having Coeliac disease. His main symptom was frequent stomach pains. He had a blood test and it showed that he might have developed Coeliac disease. He had an endoscopy (using a fibro optic tube to look a your gut via your mouth) which confirmed the blood test result. Coeliac disease is closely related to diabetes and basically means that the person has developed gluten intolerance. As a result the treatment is to have a completely 'gluten free' diet. Gluten is found in wheat, oats, barley and rye. Adjusting his diet to be gluten free has not been a big problem for Andrew because he has found that there are many alternative foods to choose from.

He was 11 and changing schools at the time of his diagnosis with type 1 diabetes. Initially he...

Show in context
SHOW TEXT VERSION
PRINT TRANSCRIPT
Okay. Well I was eleven years old when I was diagnosed. I was just in the summer holidays between primary school and secondary school, so it was quite a shock. And, all my primary school friends didn't really know about it, because I'd finished there and secondary school friends though would know me with it. It was quite hard starting a new school straight after being diagnosed, it was quite a big thing, especially for my Mum and.

Why did you find it hard?

Well actually constantly kind of watching, what my blood sugar was, very high or low; I needed to know about that.

You were diagnosed with diabetes type 1.

I didn't really know much about it at the time, and as I found out more about it, kind of got used to it and became more comfortable with it, I didn't really see it as that big a thing, at the time. I think there was a point when the first time I was there, I got a bit down about it but, I think my family helped me through that.

Were you feeling 'Why me?' or'

Yeah. Yes, why me and, I'd probably been ill for quite a long time building up to it, so, I don't think my Mum was that surprised when I was diagnosed because I had been, I was very, very thin, lost a lot of weight because of it.

And this was before you, what were your symptoms before you were diagnosed?

For how long did the symptoms last before you were diagnosed?

I'm not really sure, I could have been diabetic already for up to six months or a year I think, but we went on a camp in the summer holidays, and my Mum said afterwards, from across the field she could tell that something wasn't right, I'd obviously lost weight, I was really white, and so I think it kind of peaked at that weekend away, and I felt very ill on the way back from there. So she took me to the doctors and I got a blood test, and it came up.

He went through a 'bad phase' of forgetting his insulin injections and says it was because he...

Show in context
SHOW TEXT VERSION
PRINT TRANSCRIPT
Yeah I was injecting myself. I think my parents only ever done one injection on me. And that was to check that they could, just in case I was ill or something.

Who taught you how to inject?

The hospital, [name] hospital, very good in teaching me all the things, like the day I was diagnosed I did my first injection in the evening; they really helped me with that.

Okay. Do you inject every time you eat or you forget sometimes?

I inject every time I eat, I forget very occasionally, but that's becoming less and less now.

So it was more frequent before.

Yeah, I've had a few times where I've forgot quite a bit, but now if I forget then I just feel ill later. So it's better just to remember.

Okay, so how old were you when you were forgetting?

I don't know really, I think it's happened a few months back as I went through quite a bad phase and I was forgetting quite a few. But not as much now.

Why do you think you were forgetting?

I don't know it just slips my mind. And now I've got into a routine, as a habit at the table, just before I eat so that I can't forget it.

What did you find difficult with the other routine?

I had to have snacks every couple of hours which wasn't very healthy, and gets quite annoying as I had to keep remembering, but now I have a lot more freedom, I can eat within reason as much as I want and still do an injection for it. Whereas before I could only eat certain amounts at set times. It's a lot better now.

He was diagnosed with Coeliac disease and had to change his diet to a gluten free diet. A...

Show in context
SHOW TEXT VERSION
PRINT TRANSCRIPT
Okay. Tell me, went so, you were 14 when you were diagnosed with coeliac?

Can you tell me a little bit about it?

I was having a lot of stomach pains and other problems, and, I had a routine blood test, as with my diabetes I have quite a few blood tests because Coeliac Disease is quite closely related to diabetes and they picked it up from that. So I had an endoscopy, and they found that I did have coeliac disease, and I was informed then, I kind of slowly changed my diet. So I have a completely gluten free diet.

Gluten is found in wheat, oats, barley and rye. So I have to avoid them, but I've got a book of foods I can and can't eat, which really helps. It's from Coeliac UK. That's great, that helps a lot. There's a lot of things that contain gluten there is good alternatives for, so there's not many things I can't actually eat, because there is a gluten free alternative.

And how do you manage with lunch at school for instance? Do you have a packed lunch?

I have sandwiches, I pack my own lunch. For school, yeah. I think the school canteen could probably cater for me but I've always taken sandwiches anyway so there's no point in changing that.

There have been times when it's been a bit overwhelming, but I think I just get used to it really all the time, now I don't really think about it. If I'm going out with friends or something that's the only time that it can be difficult, I've found somewhere that does gluten free food and caters for me, but most places manage to make something gluten free.

He says that there are a number of gluten free things he can get on prescription including bread,...

We make it ourselves, we have a bread maker, its gluten free setting up, we just get flour on prescription and other ingredients and just put it in. It makes really nice bread.

Okay, so you get the flour on prescription?

Okay. What else can you get on prescription?

In the past I've got biscuits, crackers, I think you can get bread as well, but it's not very nice compared to what I can make.

I don't eat, I think I just eat the same amount as anyone does really, try and eat a reasonably balanced diet.

What is a reasonable diet?

He feels reassured by his consultant and diabetes nurses and at ease to ask questions. Trusts...

Show in context
SHOW TEXT VERSION
PRINT TRANSCRIPT
I go to [name] hospital. They've got a home care unit which is very good. Two nurses who do home visits and stuff to really help you.

So they go to your house?

Yeah. I think when I was first diagnosed I was having home visits like every day, they'd come every day, every evening to help me with my injections.

I think I can ask Doctors and Nurses any question you want. I go to a clinic, I think its every six months, or three months, and they, they look at my blood sugars and tell me what I need to change and things, but as I'm getting older I'm learning to do that myself now. Which is good, I can change my own dose now, according to what my blood sugars are like.

I don't think I've ever had anything really where I haven't agreed with them, because I know that they're acting in my best interests. And that's what they are trying to do, so, generally I just take their advice and trust them and that.

When I go to the clinic they ask how school's going and things. I think the doctors and nurses went into our school when I was first diagnosed to talk to the teachers, especially on trips away and stuff, they go in and talk to them, as it's important that the teachers know.

The nurses tell the teachers while we're away what to do if I had an accident or anything.

Okay. And you're able to contact  a member of your health care team if you need their advice?

Yeah, there is always nurse who I can  phone the hospital and they will bleep her to ring me, so I can, wherever I am, even in the middle of the night, I can be in contact with a nurse. Which is a great help, it's happened a few times.

There's times where I've used that where I would have had to have gone to the hospital, and I couldn't have used that.

Okay. Are your nurses still in contact with your school or not?

But to start with after you were diagnosed?

I think they just talked to some teachers and, my form teacher and my head of year, about diabetes.