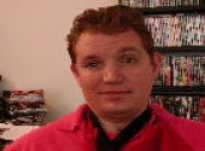 Brief Outline: Jamie sustained a traumatic brain injury and a spinal injury when he was involved in a road traffic collision.
Background: Jamie used to run his own delivery business, but does not work now. He is single. He has carers who live with him and help him with his daily life. Ethnic background' White British/English.

Jamie was travelling on his motorbike at more than double the speed limit when a car pulled out in front of him and they collided. He was taken to a local hospital where he was in a coma for about five months. Like other survivors of brain injury, he doesn’t remember his accident happening.
When he was in a coma, a doctor told Jamie’s family that he might never talk again. However, he was able to speak when he came round and described his voice as childish. With the help of a speech and language therapist his voice improved. He is pleased that he proved the doctor wrong.
Jamie explained that your brain is like “your computer” and after an injury it “doesn’t know how to behave or can’t behave, so you’re a broken PC”. His memory has been affected by his injury and says he forgets things all the time. He uses a wheelchair and has a couple of carers who are available to help him twenty-four hours a day. His care has been funded by his local council.
After his injury Jamie’s relationship ended and his ex-girlfriend has now married someone else. He is pleased for her because he “loved her so much” and “wouldn’t want her to go through too much” by looking after him.
As Jamie was involved in a road traffic collision, he was able to claim compensation. His parents found a personal injury lawyer who did this on his behalf. He used his compensation to buy a flat and have it adapted to suit his needs.
He wants other survivors of brain injury to “keep motivated” and never “give up” because people can “survive anything”.

Jamie has had the same carer for nine years. He says it is important that carers treat you safely.

Jamie has had the same carer for nine years. He says it is important that carers treat you safely.

View topic summary
SHOW TEXT VERSION
EMBED CODE
PRINT TRANSCRIPT
How did you go about finding them?
Well initially they actually responded to an advert in the paper and I chose them. I had a guy called [man’s name] I’ve had for nine years. And I’ve had [man’s name] as well for eight years.
And you know for people who are looking for someone to look after them like you have? What would you tell them is important to look for?
Make sure that they are safe and that they treat you, treat you safely and, and are responsible, that’s responsible sorry.
That’s okay.
Responsible, safe, caring. I wouldn’t really say that. These guys are, in their own little world, caring. Oh yes.

Jamie joked it was difficult to have a social life when you were in a coma.

Jamie joked it was difficult to have a social life when you were in a coma.

How my injury affected me? Well darling, basically, my injury initially was, put me in a coma. And so I, would you like me to go any further? Ok, well, being in a coma it’s very difficult to talk in a coma and therefore communicate with other people, i.e. socialise or anything.

Jamie is glad his ex-girlfriend is happy with someone new. He did not want her to have to look...

Jamie is glad his ex-girlfriend is happy with someone new. He did not want her to have to look...

View topic summary
SHOW TEXT VERSION
EMBED CODE
PRINT TRANSCRIPT
And Jamie at the time of your injury you weren’t living here were you?
No.
No okay so how did you go about finding this place?
Well darling, basically, my ex-girlfriend who I was going to marry basically has got married to another guy who I played pool with and who was supposedly my best friend. But darling no worries. They got married now, that’s fine.
Okay. And so your ex or your girlfriend at the time...
I am pleased.
You are pleased.
Do you know why?
Why.
For her to remarry that’s better, far better than looking after me.
Why do you say that?
Why do you think?
I don’t know.

Well I loved her so much that I wouldn’t want her to go through too much by looking after me and darling her brilliant Dad bought her a new flat which could happily have a, which was happily large enough for the wheelchair to go in.