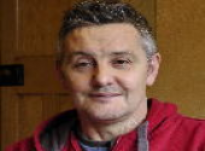 Age at interview: 59
Brief Outline: Richard had an accident in 2007 when he was cycling home from work and ran into the back of a parked van. He was 55 at the time. He had a urethral catheter for about 6 months and then a suprapubic catheter.
Background: Richard is married and lives with his wife. Ethnic background/nationality: White British.

Richard had an accident in 2007 when he was cycling home from work with a friend and ran into the back of a parked van. He was 55 at the time. He was taken into hospital, where he was fitted with a urethral catheter. He had a spinal injury which left him paralysed from the chest down.
In hospital, Richard tried intermittent self catheterisation but continued having problems. After about 6 months in hospital he was fitted with a suprapubic catheter. About nine months after having it, he had to go back into hospital and was told the catheter may need re-siting. Whenever the district nurse tried to change it, she had problems inserting the new catheter. Rather than re-siting it, though, Richard was fitted with a bigger catheter instead, a 20mm catheter instead of a 14mm.
Richard now has his catheter changed at home every 5 weeks. He said he had problems with infections early on but much less now. He is prescribed Oxybutynin to help with bladder spasms and takes this daily as well as Baclofen, a muscle relaxing medication used to treat muscle symptoms such as spasm, pain and stiffness. He has a carer coming in daily to help him get into bed at night. His wife, who is now retired, also helps care for him.
Richard said that when he was discharged from hospital he came back home, which had been extended for wheelchair use before his accident. His mother-in-law had been ill with Alzheimer’s and his wife had been her mother’s main carer. Richard uses the extended part of the house.
Richard uses a flip flow valve during the day. He tries to drink as much as he can, and often drinks water and green tea. He advised other people to remember to take extra catheter equipment when going on holiday, something he said he’d learnt from experience. Even travelling locally, he said he always carries GTN spray for autonomic dysreflexia. This is a potentially life threatening condition that requires immediate attention. It occurs most often in spinal cord-injured people and is a reaction of the autonomic (involuntary) nervous system to overstimulation causing an abrupt onset of excessively high blood pressure. Richard goes out once a week with a local group with various health conditions, an occasion to go out for a few hours and exchange news and information.
Shortly after his injury, Richard joined the Spinal Injuries Association (SIA), a national charity for spinal cord injured people. Through the SIA, he said he got a lot of helpful information and attended a few of their seminars. He also found useful information on internet forums.

Richard became paralysed in a cycling accident. At first he was given a urethral catheter. This...

Richard became paralysed in a cycling accident. At first he was given a urethral catheter. This...

It was a cycling accident. I was coming home from work, and coming down this hill, messing about really, racing with a friend on our way home. I ran into the back of a parked van.

Then the next thing I know I’m in hospital of course, and at that time it was a urethral catheter, which I had for, oh I don’t know, ‘cos they were trying to get me onto intermittent catheterisation. But that didn’t work. I had trouble with bleeding so, in the end, we decided that the suprapubic catheter was the best answer. Well, I had the choice, but overall it didn’t seem that there was any real other option. Yes.
How long ago was this?
Well I’ve been out of hospital, it was just before I left hospital and I’ve been out of hospital now four years, yeah four years.
Four years. Can you tell me what happened when you were first taken to hospital? If you could just go through stage by stage, what happened?
Yeah.
Until then, coming back home?
Well of course first I knew I was in, I think it was a high dependency and at that time. I hadn’t had any treatment or consideration for my spinal injury which is what I sustained. ‘Cos I got damage to my neck, to my mouth, so they tidied me up and then I went over to the spinal injuries unit about three days after I’d gone into hospital.

Richard decided to have a suprapubic catheter because he bled with intermittent self...

Richard decided to have a suprapubic catheter because he bled with intermittent self...

View topic summary
SHOW TEXT VERSION
PRINT TRANSCRIPT
Did they (medical staff) try intermittent catheterisation while you were there?
Yeah, they did yes. Like I say on two occasions, and one I had quite a bit of bleeding. So they decided, well we discussed it, they give, you know I had a discussion with the urologist and they told me what my options were. And so really I decided for myself that it was going to be a suprapubic catheter.
And you were fitted with that before?
Just before I came out. I had, I think it was a fourteen millimetre, which I didn’t have any trouble with blockage. But whenever they used to change it, I used to get difficulty over the nurses, the district nurses used to have difficulty re-entering the new suprapubic catheter. And so, in the end, they said it needed re-siting.
So I went back to the hospital after probably after about nine months. And they decided that rather, than re-site it, they put a bigger catheter in. So I think I’m on 20 millimetres now.

View topic summary
SHOW TEXT VERSION
PRINT TRANSCRIPT
Were you ever given any medication to take daily?
Well I am on daily, I’m on anti-spasmodics, baclofen antispasmodics and oxybutynin for bladder spasms. And that’s it. Oh I have painkillers, of course, if I need them but I try not to use them. And diazepam, occasionally I’m diagnosed diazepam to help with night time spasms really.
Have you had any side effects with any of them?
I don’t think I have. But it’s hard for me to tell because I don’t know if I’m, if it’s giving me stomach ache. I don’t know other than spasms again. If it causes diarrhoea or constipation, again you know it’s hard to know if it is coming from the change of medication for me really.

Richard’s wife orders his catheter equipment. He tried a different catheter valve once but it...

Richard’s wife orders his catheter equipment. He tried a different catheter valve once but it...

View topic summary
SHOW TEXT VERSION
PRINT TRANSCRIPT
They [catheter supplies] are delivered on a regular basis. My wife deals with that generally, and we’ve had a bit of difficulty with the authorities trying to take you this way and that way. And the main difficulty we had was, I think it was an intention of cutting down on the cost, but they tried to persuade us to use different, I’ve got a flip-flow valve on the catheter. And they tried to persuade me to use this other valve which didn’t match to my catheter. And so I kept getting leakage, which was highly, was really infuriating.
But then we’ve gone back to the original flip-flow valve and that’s sorted it out. But you do have to watch out for things such as that. You could easily think well, you know it doesn’t matter to me, I’m not bothered which valve I use. But certainly if you’ve got a working system, you’re best to stick with it in my experience.
Yeah. So if something works, don’t make too many changes?
No.
Previous Page
Next Page