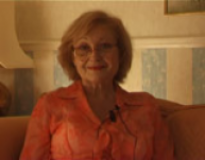 Age at interview: 63
Age at diagnosis: 56
Brief Outline: Diagnosed with non-small cell lung cancer in 1995, which was treated with regular chemotherapy, at least every nine months. In 2003 developed metastases in the spine.
Background: Company director (retired), widow, 2 children

She has found a sense of peace and calm.

She has found a sense of peace and calm.

View topic summary
SHOW TEXT VERSION
PRINT TRANSCRIPT
As I said I just feel very at peace with the world, very calm. And I see people getting angry and agitated and you know like my son and I say 'Calm, take a few deep breaths, be at peace.' I mean why I am like this? I really don't know. I've discussed it with my priest. I'm just so happy to be alive I suppose. You know, I see my grandchildren and, yeah it's a good life.

Do you get comfort from your priest?

Yes I do, yes. He came to visit me in the hospice with a dozen red roses.

Which I thought was lovely.

You see... when you're told you're gonna die you suddenly appreciate the small things. And here I am eight years on, which I've been told is an absolute miracle so I just thank... I'm just thankful for every day and I make sure that I enjoy it, I don't waste time.

The care she received in the hospice was 'amazing' and she would happily return there.

The care she received in the hospice was 'amazing' and she would happily return there.

View topic summary
SHOW TEXT VERSION
PRINT TRANSCRIPT
I didn't know how long I was going to stay and because I was feeling really poorly I just felt 'I don't care what people do with me'. I just wanted to lie down quiet in a darkened room.

My brother, sorry, my son took me, and it sounds strange but we both said this, as you walk in, it is a beautiful place but as you walked in you felt a blanket come over you of calmness and care. And the staff were just amazing, absolutely amazing. They really did care. Genuinely care and pandered to my every whim. Whatever I wanted I could have. They were always there for me, they remembered everything. And the first day I heard the trolley coming along the corridor - clonk, clonk, clonk - and I thought oh it's the time for medicine, but it wasn't, it was the drinks trolley for the pre-dinner drinks.

Which sort of sums it up. Meal times they always asked you, they didn't give you a menu, they asked you what you would like and I like toast in the morning and it came up fresh, still with the butter melting. You know there was that much care.

The little things, yes. And they would sit and talk to you and I know I had a room on my own but I didn't see anybody die.

I wasn't aware of anyone dying because that would have absolutely terrified me. And if... When I have to go back again I'd be quite, quite happy to do so. In fact some days when I'm really poorly and I sit here and I think 'oh it would be nice to be in the hospice and be looked after', but then no, I'm not giving in to it.

Describes the hospice, its facilities, the various complementary therapies, and peaceful...

Describes the hospice, its facilities, the various complementary therapies, and peaceful...

View topic summary
SHOW TEXT VERSION
PRINT TRANSCRIPT
And there is another thing, I've totally forgotten. They have a music room in the hospice with every conceivable instrument and they asked me if I would like to meet the musician and have a session with him, and I said, 'Well I'm not musical-minded. I cannot read music. I don't play the trumpet, the violin, the piano, anything.' And they said, 'No, that's not the point of it,' and I agreed.  And this very charming gentleman took me in to this room and sat me in front of the drums and just said, 'Just do what you want.'

And I could see where he was coming from, to get that, feelings out, banging on the drums and also he had me at the piano and of course I didn't know what to do but I did find that, oh it sounds all rather silly doesn't it, but that was interesting, that was intriguing that they felt that music would help.

Oh, I'm glad you remembered that.

Yes, if you physically play the instruments...

Is there a chapel at the hospice?

If you wanted to get out to church could they take you?

Oh yes, yes and you could also go out.

You see one day my son came over with the children and there is a play room there fully fitted with toys, even a computer for them to play on. But it was a lovely day so they took me out for lunch and then brought me back and that was very nice.

Oh it is, it is. Yes, yes. So what have they got? They've got the hairdressers, the music room, the aromatherapy room, a room for friends and family to stay overnight if need be. A day room where you can meet and you know have a coffee and do whatever. A dining room if you want to go and have your meals in the dining room and as I said beautiful rooms with en-suite facilities. And this wonderful feeling of peace.

View topic summary
SHOW TEXT VERSION
PRINT TRANSCRIPT
Yes. There was a day room, there was absolutely everything there, including the the beauty side. I had aromatherapy or reflexology every day.

Could you say a bit about those two things please?

Oh wonderful! The young lady came in after I'd had my bath and I would lay flat on the bed and she would massage me with oils and that was so relaxing, so, so relaxing. And I would usually have that in the afternoon, before afternoon tea. So I'd have a little sleep and then they'd tap on the door with my tea and cake which I've never had because it's fattening and it's got me in to a bad habit because I now have afternoon tea.

Could you choose which oils you had?

Yes, yes I could yes. I did have one of my own but I don't think she approved of that so she used her own, yes.

Did you say you had reflexology as well?

Could you explain to people who don't know what that is?

Where they massage the feet. I've got that right haven't I?

Did the feet? Yes. And I know it sounds... it probably sounds silly to a lot of people but you could feel, once she put her hands on your feet and like started to massage your big toe, you could feel the sensations coming up your legs and you could feel your body sort of draining away from all the tensions and... Yes I would like to have that regularly every day, that would be lovely.

The morphine makes her feel a bit 'dopey' but it controls the pain.

The morphine makes her feel a bit 'dopey' but it controls the pain.

View topic summary
SHOW TEXT VERSION
PRINT TRANSCRIPT
How did they manage to get the pain under control?

With morphine. I take 60 [mg] in the morning and 60 [mg] in the evening - tablet form. And if the pain gets really bad in between times I can take liquid morphine and that is keeping it under control. I know it is because one night I forgot to take my pills and when I woke up in the morning, not having had any medication the night before, or during the night, I was in a lot of pain. Yes, it was very difficult to walk.

Does the morphine have any difficult side effects you have to cope with?

I don't know whether it's the morphine or the other drugs but I do feel, with the morphine, I know that's what's making me dopey, sort of drugged. And then the other pills are putting me on a high. Everyone's going around with long sad faces because mother can't walk and she's got spotty skin and I'm all sort of jolly.

Hmm, you're feeling good on them?

She remembers a rather 'silly' conversation with a woman who she thought was a counsellor.

She remembers a rather 'silly' conversation with a woman who she thought was a counsellor.

View topic summary
SHOW TEXT VERSION
PRINT TRANSCRIPT
But no. I've never felt the need for a counsellor. Perhaps I will do one day just to see what they've got to say, out of curiosity.

There was one stage, yes... there was one incidence. I was in hospital, this was recently, and this counsellor came in and I would say sort of forced herself on me and I had great difficulty in keeping a straight face because I do look upon myself as being very worldly-wise and as I said in full control of my situation. I thought she was rather silly. She didn't look at the person she was talking to and she spoke to me like a child. She said, 'If I may say so, you are wearing the wrong colour. You should wear brighter colours.'  And she... what was another thing she said? She said 'You remind me of a duck, quacking on the water and paddling as fast as he can to get away.'  And I thought I don't need this. So that is the nearest I have come to counselling.

Oh dear. Have you had any other visitors that you haven't really wanted?

No, this was in the hospital.

I can't say I didn't want her coming in. I mean, obviously I did. She wanted to make a set time and I just took her card and thanked her kindly and didn't follow it up, and avoided her whilst I was in hospital. But I really did think that was... that was silly.