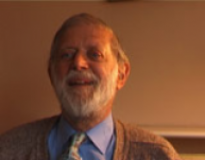 Age at interview: 84
Age at diagnosis: 82
Brief Outline: Diagnosed with bladder cancer in 2001, and unsuccessfully treated with a bladder infusion of BCG. Offered radiotherapy but declined because it was thought that treatment might affect mobility (due to polyneuropathy diagnosed in 1994).
Background: Retired, married, 3 children

The hospice palliative care team has helped him to control pain without serious side effects.

The hospice palliative care team has helped him to control pain without serious side effects.

View topic summary
SHOW TEXT VERSION
PRINT TRANSCRIPT
So, now I've been transferred to the care of the Palliative Care Team here who are looking after me with great sympathy and skill. And so the problem at the moment is to take enough pain killers since this pain business has gradually increased and increased and balance that with laxatives, because the good painkillers are related to or derived from opium, which as everybody knows, is constipating.

And so it's a question of balancing one against the other and I think we're winning at the moment and as you see I'm able to be up and about and so on.

How did you come to get the right balance for the painkillers.

Well, it's a continuing process. I mean if I find I'm getting a bit constipated, I take a bigger dose of Lactulose which is my principal laxative and I also take Fybogel which is supposed to help a bit too.

And it's a question of balancing the dose against the requirement and that will go on being the case I think.

And have the Palliative Care Team at the hospice helped you sort that out?

Oh yes, that's the thing they're working on.

Says that death is part of life and that we should accept death without fear.

Says that death is part of life and that we should accept death without fear.

View topic summary
SHOW TEXT VERSION
PRINT TRANSCRIPT
We've talked quite a lot about death and dying today.Could you explain why you feel peaceful with the idea of death?

Well because I think first of all that death is obviously part of life. Nothing is immortal in the living world except those very small creatures, which can split in half and make two creatures indefinitely. But for larger bodied creatures who can't do that, their sloughing off their mortal coil is a perfectly physiological thing. Now we humans can look ahead and fear death if we are so minded but the thing is not to fear death.

One can be afraid of a painful death or sorry for people you leave behind and that sort of thing but various arrangements can be made for those people and pain control is so well organised now by the hospice movement and so on that that needn't worry one and I think the thing is just to accept that that's what happens.

Thank you very much. So you've just been talking about your feelings about death and you feel comfortable about the idea of dying. Do you have any belief in an afterlife?

No, I don't myself, because I feel that our bodies are like the bodies of animals and we don't think they have an afterlife so why should we think that we have an afterlife. If you do, you have to say that at some point in human evolution things suddenly became different. From that point on, people had an afterlife.  Well I think that strains credulity beyond the point that one can cope with.

He has signed legal documents to ensure that he is not resuscitated or kept alive artificially.

He has signed legal documents to ensure that he is not resuscitated or kept alive artificially.

View topic summary
SHOW TEXT VERSION
PRINT TRANSCRIPT
Have you thought about the idea of a 'living will' and resuscitation?

And how would anybody know that if you were taken into hospital quickly?

Well that's a good question. We've told our GP of course and we hope that he will transmit the information if he arranges for me to be admitted in an emergency. It's in the hospital notes but of course my hospital notes are now so thick because I've been voluminous in the uses I've made of medical services and so nobody would easily find that.

It's quite a problem isn't it.

Well I think that it depends on the family making that point on my admission if that happened.

Did you discuss that with the family before you made those sort of decisions.

So that's fairly clear from the family's point of view.

Talks about the practicalities of leaving his body for anatomical science.

Talks about the practicalities of leaving his body for anatomical science.

View topic summary
SHOW TEXT VERSION
PRINT TRANSCRIPT
Yes, we are doing a bit to try and put things in order for my wife. We've brought out a draft plan of a memorial service. I've left my body to anatomical science so there won't be a personal funeral but we might perhaps attend a general memorial service in London University. The anatomists there hold a service periodically for the relatives of all the people who've given their relatives bodies and we attended that once and we were very impressed. The professor of anatomy spoke in the pulpit and said how useful it was and so on and it was all discussed completely openly there, which I think, was very healthy.

If you wish to give your body to medical science, how do you go about arranging that?

There is a person in the Civil Service in London called the Inspector of Anatomy and one's GP can get in touch with him and say that this is what one wants to do. It depends where in the country you are, what actually happens. Here we're in a university town with a medical school. I've been directly in touch with the professor of anatomy and genetics here and I exchange correspondence with him from time to time.

If one lives in some remote part then the Inspector will see where there is an appropriate medical school then the people take complete charge. They send an undertaker to remove the body and the relatives don't have an expense for that and then in due course the medical school holds a sort of general funeral service for body parts and so you know it's all very tastefully done and more people ought to be encouraged to do this actually.

How does your family feel about that?

Well they've taken it in their stride.