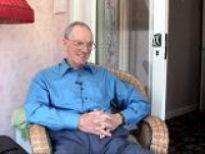 He suggests factors that should be considered when talking to children about serious illness.

He suggests factors that should be considered when talking to children about serious illness.

View topic summary
SHOW TEXT VERSION
PRINT TRANSCRIPT
As far as my daughters are concerned they are as fully aware as I am of every aspect of my illness. At least one of them has always been with me when I've had the appointment with the oncologist. And they've also helped take me down for my chemotherapy as have some of my friends and I've always been very open with everybody about it. I don't see any point in being otherwise. I know patient confidentiality is very important in the medical world, but for me, if I'm talking to someone in the surgery those taboos are pushed to one side. I'm honest, because I think perhaps it may help them to see me being so open and honest about it in some way, in the future or possibly they're in a similar situation as myself, so therefore to me openness is very important.

With my grandsons, my eldest grandson is aware of what the situation is. My 13-year-old grandson is a very emotional boy so we've been ultra-careful with him and not put too much emphasis on the fact that granddad may not be here much longer.

The younger one's too young to really understand yet...

So are you saying you look at each individual?

And think about how to talk to them?

And so you're taking into account their age and maturity. Are there any other factors you think we should take into account when talking to children?

I think we've got to be honest with them we mustn't build their hopes up with false beliefs. I think that's a wrong thing to do. Having said that I think we've got to be very careful particularly in the case of an emotional child because it could have a very detrimental effect on them. But having said that I think we have to prepare them for what is inevitable so they can handle it better when that time comes.

Says that people live after death through their genes and because they influence the way others...

Says that people live after death through their genes and because they influence the way others...

View topic summary
SHOW TEXT VERSION
PRINT TRANSCRIPT
Religion is important to me, perhaps not quite as deep as a lot of people. A lot of people are convinced there is life after death... That is not one of my philosophies. My belief in life after death is that the way you live your life influencing other people. If you have a family then you pass on certain aspects on through your genes, but I think the way you deal with other people is far more important really because that probably influences the way they live their lives and I'm a firm believer in that some of you, part of you will continue in other people after you're gone, yeah.

So when you ask yourself what's the meaning of life, dying and death is that the answer you come up with?

When you see some of the programmes about the way other people live in other countries they've got a much more straight forward attitude to death.


He would prefer to die at home but wouldn't like to be a burden on the family and would consider...

He would prefer to die at home but wouldn't like to be a burden on the family and would consider...

View topic summary
SHOW TEXT VERSION
PRINT TRANSCRIPT
Have you got any thoughts for yourself about what would be the best kind of care you could have as time goes on?

The best type of care I could have I suppose as times goes on, if it becomes necessary, would be permanent nursing care in some establishment that was particularly set up for that. Having said that, there is a trend today of nursing people in their own home providing I could cope with that I would be happy for that to happen to me.

I don't want to be a burden to my family, that is something that's definitely out of order as far I'm concerned. I've seen other families that have endeavoured to cope with situations of that type when they couldn't and it practically destroyed the family, therefore I... well.... no that's not for me. Yeah, with the help that's given to people in their own homes by social services and by local medical profession I think to a degree one can cope with it in those circumstances.

I go back to my wife who died from cancer. One of the things she said to me was, 'I know I'm dying but I want to die in my own home'. And my response was, 'If we can manage to bring that wish to fulfilment we will do that'. And with the help of my 2 daughters and the local community nurses and the doctor, we managed to achieve that. It was hard work. It was very emotional but we managed to carry out her last wish, so yeah I see the element of nursing at home is important if it can be coped with without too much strain.

Do you know much about the kind of care that's available in nursing homes and hospices?

Our local hospice is mainly used as a sort of, how can I put this... to give carers some relief. They go in for perhaps a week or two, the patient, and then they come back out again and they probably spend their last few days there. Yes, I mean, if it becomes necessary for me yes, I will be quite happy in that...

Thinks that euthanasia is a very complex issue and that every case should be judged on its own...

Thinks that euthanasia is a very complex issue and that every case should be judged on its own...

View topic summary
SHOW TEXT VERSION
PRINT TRANSCRIPT
At the moment you've probably seen in the media there's a big debate going on about what our national policy should be on euthanasia and assisted suicide have you followed any of that?

Well no, but I have my own thoughts on it obviously as far as I'm concerned with euthanasia... the thing that would concern me- very much is the abuse of it. It could be used in the wrong way therefore I think it requires a lot of careful thought because as we said earlier different people have different ideas and treat things in a different way. To deliberately let someone die or even assist them to die that a very difficult question, my mind goes back to, what was the ladies name Mrs Penny, was it?

Diane Pretty that's the one yeah. I found that very moving. She went to Switzerland didn't she and was talk about prosecuting her husband?  I've never heard any more. Well to prosecute her husband I think that's a miscarriage of justice to be honest.

So in a way your kind of in support of that?

Yes, in a way yes. I am because of... I think it depends on the individuals again doesn't it? I mean I think Diane trusted her husband to the ends of the earth I mean what he was doing was of her request so I think the possibilities there were zero but obviously there would be circumstances where abuse could take place. It's got to be...  Very, very difficult one that.

As you say it is very complex?

Very complex. I think you've got to judge each case on it's own merit actually and the people involved.

Knowing that his remains will be placed next to those of his wife comforts him.

Knowing that his remains will be placed next to those of his wife comforts him.

View topic summary
SHOW TEXT VERSION
PRINT TRANSCRIPT
There's this fear of death that a lot of people have got and you've not got that same attitude?

No. I would hope when my time comes that I won't be in a lot of pain. That's the only thing and I think modern medical science has moved far enough down that field to be able to help in that respect. No, I haven't but I think one of the things that has influenced me since my wife died is the fact that, this may sound a bit morbid actually, I know when my time comes my remains will be put with my wife's. I couldn't ask for more.

And that really would make you feel good?

Yes, I can understand that, that that could really be important, couldn't it?

Yes, very important to me

My wife and I... I suppose I can honestly say we were made for one another.

Yes, we could converse without talking... that as I say we've been... you know 44 years is a long time

Well that's so good isn't it?

And that's such a comforting thing to me. It's one of the things that helps me face the inevitable, yes.