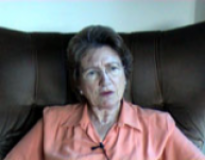 Age at interview: 67
Age at diagnosis: 57
Brief Outline: Had two sub-arachnoid haemorrhages in 1993 and then developed hydrocephalus. Had a shunt inserted in 1994, which was "revised" (removed and replaced) in 2000.
Background: Accountant (retired), widow, 3 children

When her husband was dying she was given a bed in the same room so she could be with him when he...

When her husband was dying she was given a bed in the same room so she could be with him when he...

View topic summary
HIDE TEXT
PRINT TRANSCRIPT
And they were so considerate. They put him into a room on his [own] because they felt that he was a rather private person and they were absolutely right.

Indeed I don't know if you want to know this but they did ask me to stay because the roads as they put it were so slippery. Well of course they weren't. I could've gone down the main road and I'd have been perfectly alright but it did mean that in fact he and I... they brought in another bed into his bedroom and they dropped the cot side between us and we went to bed as we always had done on his last night.

Oh, that must've been wonderful.

It was. If you'd had a million pounds, with the care that we... that they... that we had on hand, the slightest ring on the bell, someone was there. I didn't have the responsibility of caring for him but I had... he had the comfort of my being with him.

Indeed he had said, "I'm so glad you're with me tonight, I didn't want to die alone'.

A clinical psychologist helped her to control her pain with various drugs.

A clinical psychologist helped her to control her pain with various drugs.

View topic summary
SHOW TEXT VERSION
PRINT TRANSCRIPT
She was the clinical psychologist in the pain management clinic and she would always help me because there are times when you're managing pain, when you get what they call a flare up and you really don't feel that you can cope with anything. And if you've been told to take pills by doctors there is absolutely no point in saying, "They upset me so I'm not going to take them'. You've got to balance it. Which is the worst? The upset from the pill or what it's helping cure?

All pills have got two sides to them, just like our natures. And you've got to work with those pills and the only way I can see if somebody is in pain which is constant, and I really was, I'd got to the point where I was taking as many as nineteen pain killers a day. I was having to syncopate two different varieties. One was meant to last six hours but after three hours it didn't work. So I introduced a second one and then after three hours I went back to the first one. I had to write it down all the time to make sure I didn't overdose because there's always the danger you're in pain and you think to yourself, well I don't know. 'God I must take something' but the next painkiller has not stepped into action.

And I found pain, I best explained it like a roller coaster. You were fine when you were at the top of the hill and when you were riding down the other side and then at the bottom there was a plateau which is where you should take the next pain killer because otherwise you got halfway up the hill and you couldn't make it and neither could the one pain killer you were going to take next. But get a regime and that's where the planning came in and of course the patience is you've got to still go on taking them. Even if you think I don't like taking all these chemicals, you're only taking them to help yourself. And if you're not prepared to do what they'll offer you in the way of help you don't deserve it.

She is a Christian and believes that at death the spirit leaves the body.

She is a Christian and believes that at death the spirit leaves the body.

View topic summary
SHOW TEXT VERSION
PRINT TRANSCRIPT
I'm a true Christian believer, I have no dread about death. In fact when I'm feeling very unwell, or depending on however my illness chooses to affect me on any particular day, I would welcome it.

So you believe that after death there's something else?

Have you got any idea what it is?

No and I don't really think we're meant to. I have been privileged, I think is the right word, although it was a bit scary at the time, each of my husbands has died in my arms and there is no doubt whatsoever in my mind that as someone dies that spirit, that essence, you physically see it go. And what you're left with, well putting it bluntly is just a carcass and it really doesn't matter whether you bury it or burn it or put it under the sea, whatever, that isn't going to make any difference to the person it was.

I'm sure you've experienced this, you're thinking about somebody and then right out of the blue they happened to ring you, right there and then. There is something a bit more than we can actually explain on this earth, that's my interpretation of it.

I was very, very cross when my mother died, seemingly out of the blue, and it was a long, long time before I could reconcile myself to this way of thinking. And it was just because a visiting clergyman gave a sermon and he was talking about bereavement and he happened to say, "Well of course you've got to realise, God isn't going to take the naughty ones, he's always going to take the best'. So I'm afraid I'm a bit naughty so I'm having to wait my turn.