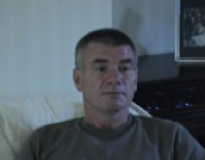 Age at interview: 54
Age at diagnosis: 53
Brief Outline: Diagnosed with mesothelioma in April 2003, followed by left extra-pleural pneumonectomy (left lung removed, together with chest lining, diaphragm, and lining round the heart, and replaced with Gore-Tex).
Background: Engineer in nuclear power station, married, 1 child

He would not try complementary therapies because he cannot believe in treatments that have not...

He would not try complementary therapies because he cannot believe in treatments that have not...

View topic summary
SHOW TEXT VERSION
PRINT TRANSCRIPT
So we were just going to pick up on your views on complementary medicine.

Right. Yeah. Because of just the way I am. I'm a practical down-to-earth type of person and I only believe in the real world. I think I would be the worst possible candidate for complementary medicines. The sort of the hands on type things and the funny drugs... well not funny drugs but I mean I know there's natural remedies and I'm sure natural remedies work but the crystals and all that sort of thing, certainly wouldn't work with me because mentally I wouldn't let them work, I don't think.

So would you rather follow the traditional route of what we call in our society palliative care?

Yes. I'd like treatment that has been tried, tested and has shown how the treatment works.

He was shocked to hear that major surgery might prolong his life but would not provide a cure.

He was shocked to hear that major surgery might prolong his life but would not provide a cure.

View topic summary
SHOW TEXT VERSION
PRINT TRANSCRIPT
But one of the things, the biggest shock to both myself and my family, [was] when we spoke to the surgeon and he said that he'd... what he was going to do for the operation, removing the lung and obviously the tumour.

And we talked to him, about, you know, the cure and he said, 'Oh, it's not a cure'. And that was a big shock to us, knowing that I was going to have this radical surgery but still not be cured. And he told me then that without the operation I may live six months to a year.

With the operation it may give me another year and that was a big shock!  But we decided, that's myself and my wife, that it was our best chance of survival, you know.  Rather than go away knowing I was going to die within six months to a year.  We would go away and give it our best shot and our plan is that I'm going to be the first survivor.

His wife recalls how she learnt about the symptoms of mesothelioma on the internet.

His wife recalls how she learnt about the symptoms of mesothelioma on the internet.

View topic summary
HIDE TEXT
PRINT TRANSCRIPT
Yes, I've been looking at the internet since he went into hospital. They said that they hadn't found any mesothelioma cells in the fluid that they drained from his chest. So I picked up on that word, well that's just the kind of person I am, so I put that in on the search engine.

You mean the fluid bit?

No, I put in 'mesothelioma' because I'd never heard of it before and I really didn't even know how to spell it. So when you're on the search engine it corrects your spelling. It says, 'Do you mean?' Doesn't it?

And so of course it came up and that was when I actually saw all the sort of horrid details about how it was and it actually gave the symptoms. And so when I looked down the symptoms, it said about a croaky voice. It said about backache, things that my husband had had problems with. He had all the symptoms so of course my immediate reaction was that I just felt physically ill and shut it all down, but that was actually on the cancer site, on the BACUP site so it was, was the proper site, yes. And of course then when I went back into hospital and they were asking my husband more questions I was able to say then, 'Have you mentioned your croaky voice? Have you mentioned your backache?'

Because my husband had been going to the doctor about his backache for a couple of years, and had X-rays, and they couldn't find anything. And that is one of the symptoms. His croaky voice had been put down to asthma, which we now think was probably part of the mesothelioma, you know, one of the symptoms because it can manifest itself several years before.

Says he isn't angry and finds it easier to cope if he moves forward and thinks positively.

Says he isn't angry and finds it easier to cope if he moves forward and thinks positively.

When I was working with it, or I wasn't working with it, I was exposed to it, in the power station that I worked but at the time it seemed a small problem. Because we were, late 60s, early 70s in an old power station you were just exposed to so many other hazards. You know you could have choked on sulphur fumes. You could have given yourself nasty burns. We were, one of the things that we were really concerned with which was a major problem at the time was pneumoconiosis. Miners. We knew miners were suffering with that and we were working with very fine... we were working with coal dust, which was like talcum powder.

And I don't believe being angry with my employers is going to help me. You know, I've got the same employer now who, when I was exposed, but the company, the people who are in the company now weren't the people to blame. I could be angry with the government but it's a different government. Circumstances change and there is just no point in me being angry because it's just not going to help. What I've got, I've got... being angry is not going to get rid of it. The only way I can get rid of it is by treatment and by having lots of positive thoughts. So I just feel 'be positive and go forward' all the time, not just look for someone to blame and things like that.

His employers have accepted liability for his exposure to asbestos and he has obtained compensation.

His employers have accepted liability for his exposure to asbestos and he has obtained compensation.

View topic summary
SHOW TEXT VERSION
PRINT TRANSCRIPT
In fact, I have got a compensation claim and my employers have accepted full liability for my exposure. But it is one thing that I didn't actually want to start. When I was first diagnosed I think nearly every doctor I saw said that you should be starting to claim compensation, which struck me as a bit strange that doctors were worried about this. I said at the time that I didn't want to be distracted by compensation.

My head was full of so many things already with being diagnosed with a terminal illness. I didn't want to be distracted from recovery by what I knew could be quite a sort of long drawn out process, but one of the cancer specialist nurses came and talked to me and she said, 'You really must think about claiming compensation'.  And she gave me some ideas of how to go about it and I contacted a solicitor who was recommended to me who deals with industrial diseases.

He was wonderful. He understood my condition and the thing that he said to me which made me want to go ahead was, he said, 'You have to decide whether you want to claim and get the benefit of compensation while you are alive or whether your widow claims when you are dead'. I thought, well, putting it that way if we can get some compensation it will help us have a better life for my remaining years. In actual fact, it hasn't been a problem at all. The solicitor has been really good.