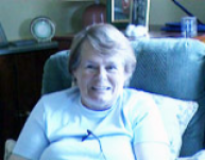 Age at interview: 65
Age at diagnosis: 57
Brief Outline: Diagnosed with breast cancer in 1994, followed by lumpectomy and radiotherapy. In 1997 another tumour diagnosed, followed by a mastectomy. In 2000 had a meningioma, followed by surgery.
Background: Teacher (retired), divorced, one child

She followed a non-dairy diet and felt more energetic.

She followed a non-dairy diet and felt more energetic.

View topic summary
SHOW TEXT VERSION
PRINT TRANSCRIPT
You said you thought that the book had helped you and the diet, can you talk a bit about that?

Yes. The lady who wrote the book is a scientist and so is her husband and she'd had oestrogen led breast cancer as I had done and she'd actually been in the same hospital and so I felt I had... I felt sympathetic with her to start with and then as I read the book I began to think that everything that she was saying it made... it spoke to me it really did because some books you read them and you know that they're not telling the whole truth but I felt that she was being totally honest and that she'd really researched this carefully.

And I thought I'll give it a try and it's soya based so that she recommends you not having anything at all with dairy food in it and that means being very careful and making sure that you don't eat anything that's maybe just got a tiny trace of dairy food in it.She doesn't eat beef because she says she doesn't want dairy-fed cows you know, but she said that she had got better and she had been told she was terminal.

She'd had chemotherapy and then she and her husband discovered that the Eastern women who have kept to their traditional diets had... the incidents of breast cancer among them was so low as to be none - it didn't happen, and she said that where the people she had spoken to had kept to the diet they survived and the people who thought or were tempted by yoghurt or something diary, died.

So when did you start changing your diet?

The minute I found that third tumour.

And how long ago was that?

That was last year, so it was about a year ago.

And what have you noticed has happened since then because of that change?

I'm much more confident I think because I've cut out so many things that introduce a kind of fog with me. A mental fog that has gone now so that, because I have a totally different way of eating and I'm eating a lot more fruit and a lot more vegetables which are very good for you and I'm feeling much more energetic as a general rule and I think that's what's leading to this feeling of confidence.

Suggests that people eat a good diet, avoid stress and believe that they will get better.

Suggests that people eat a good diet, avoid stress and believe that they will get better.

View topic summary
SHOW TEXT VERSION
PRINT TRANSCRIPT
Is there anything you feel you'd like to say to people who perhaps have been given a diagnosis that their illness is not curable?

I would say that they must have patience, a belief in themselves. If they feel their diet is not of a high standard they should try and improve it because it is important.

At the same time they need to spend their time in the company of good friends and to avoid situations which cause stress because enough stress is going on in their lives with the illness, they don't want constant rows or disagreements with neighbours or anything of that sort and to engross themselves in things that give them pleasure.

And what would you say, earlier you were talking to me about, I think you said your philosophy of life, you said you hadn't got a religion but it was like a belief in yourself?