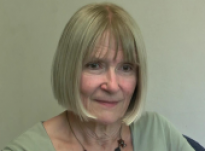 Charlotte's uncle, who lived in Holland, was dying of cancer at the age of 76. He decided that he did not want any more treatment and that he wanted an assisted death at home. Charlotte and his children were with him when he died. His death was dignified and peaceful.

Charlotte is a consultant systemic psychotherapist, and a trainer and researcher. She is divorced, has one adult child, and is White European.

Charlotte visited her uncle, who lived in Holland. He was seriously ill with cancer. She was...

Charlotte visited her uncle, who lived in Holland. He was seriously ill with cancer. She was...

And he lived at that point on his own because his wife, my Aunt had died that year previously. And he has five children, my cousins. And so what they decided to do was that they would try and support him being at home. And I think there was other hospitals; I mean staff who would come in during the day but they decided to have a rota to stay with him overnight,

The family yeah. And because I was, happened to be Holland at that time I said yeah I’d very much like to come and volunteer to take part in doing that.

So it just so happened that I had volunteered to do that on this Friday night and had arrived after work that I was doing to be greeted by my Uncle as I opened the door, saying, “Hello Charlotte, lovely to see you. I’ve decided to die tomorrow.”

Her uncles GP and another doctor agreed that her uncle had good reasons for wanting an assisted...

Her uncles GP and another doctor agreed that her uncle had good reasons for wanting an assisted...

Had he planned this for some time?

Not that I had been aware of, but perhaps I think he probably had been thinking about it and it may well be that he’d discussed it previously with my cousin, who didn’t seem all that surprised about it. So what had happened prior to my arriving that day was that they had organised for his GP to come and visit him, because in Holland the arrangement was that if you need, wanted an assisted death that you had to have at least two doctors come and talk with you. His GP had known him for a very long time and I think had seen him all the way through the illness, I think he’d only been ill during that, that year, but was pretty ill. And so his GP had come to see him and had agreed that he, you know that there wasn’t any more treatment. He was refusing any more treatment. He was quite, quite ill and felt that he had good grounds for wanting an assisted death.

And then they’d organised for another doctor to come and meet and talk with him also who had agreed that as well. So they had both signed, because I think you have to sign something, they had to give agreement that this could go ahead and they had agreed that that would be the case and that it had been arranged that he, that the GP would come and do the assisted dying with him the following morning at 11 o’clock in the morning.

As Charlottes cousins gathered in the sitting room, her uncle talked about his furniture and his...

As Charlottes cousins gathered in the sitting room, her uncle talked about his furniture and his...

So we had quite a chance to talk about it together my cousins and I. And then in the morning my Uncle, we got him out of bed, we helped him to the sitting room and he said, he said, “Well if there’s anything you want to ask me, you know this is the time.”

And and gradually everybody appeared, and then it was interesting because he lived in that, in a quite a modern house that he and my Aunt had moved to but at some, a few years before, and it was full of various things like portrait’s and pieces of furniture that had meant quite a lot to them, and so he went through every single piece of furniture in the, in the room and just told us about the association that he had to that, you know, a portrait that was done of one of his children when they were young and what it meant.
And then we also decided to do some planning about his funeral. So we sat down and he talked about some music that he wanted and music that had meant a lot to him in relation to his wife, my Aunt. And how he thought the funeral should go. So and by then everybody was there.

Charlottes uncle said good-bye to her and her cousins and then the GP gave him the lethal...

Charlottes uncle said good-bye to her and her cousins and then the GP gave him the lethal...

And then we were all back in the room and he said, “Okay, I think it’s time for me to say goodbye to each of you then.” And so each of us went up and he said something to everyone. And one of my cousins got very upset about it and he said to him, he said, “I know, I know it’s very upsetting for you, but for me this is the right thing to do. And I’ve wanted to do this for quite some time. And it just feels like the right time for me to do that.” And to each of us, and then he wished each person very well for the future and well for their children and, and then he, and then when everybody had had a turn he said to the GP, “Okay, please do it now.” And so the GP then gave him the injection and it was a very quick death actually. I can’t imagine, I mean I know time goes slow when something like that happens, but I think he probably died in about 30 seconds to a minute. It seemed very fast.

Thirty seconds to a minute?
Well it seemed very, very fast to me actually.
Did it seem peaceful?
Very peaceful. Very, very peaceful. And the other thing I think that was so striking about it was the way that my Uncle could take charge of it, because I think during his illness, and I think that often happens when people are ill and you know that they don’t feel that there’s very much that they can do for themselves. They have to turn themselves over, their bodies you know their treatment, other people are making decisions for them.
But this was something that he could do and as I said I’ve never seen anybody die before but there was something about the way he could do that, and the way he could say goodbye, and his ability to take charge of it, I thought it was the most dignified, respectful way of dying. I mean as I said an experience that I just have descriptions of other people’s deaths, you know and I know some people die very peaceful and some people die in very, very difficult circumstances.

Charlotte does not think that her uncle was religious or that he was sure that there would be...

Charlotte does not think that her uncle was religious or that he was sure that there would be...

Did he have any sort of spiritual beliefs do you know?

Well that’s interesting. He wasn’t a spiritual man; I mean he wasn’t a religious man. I think he was rather anti religion. And I don’t think he was somebody who talked very much about his beliefs other than being rather anti-religion. I think he’d been brought up as a Catholic and probably had become a lapsed Catholic. I think his father had been a Catholic and I think his Mother had converted and wasn’t very Catholic, so I don’t think he’d ever really got connected to religion, but it was very interesting when he was talking about his funeral and the music that he chose a piece of music that was very meaningful for him and his wife. And he, it kind of intimated that something about possibly having some connection to her, so that I don’t know, I really don’t know. But certainly he wasn’t somebody who had a certainty that, that there’d be anything after death. But there was something very, I don’t know, I found it the most moving experience or one of the most moving experiences in my life really, taking part in this. And I guess it made me really question why that wasn’t possible in other places. You know there he was at home with the people he loved, in a way that he could take charge at that point, where he probably felt rather powerless in many other aspects of his life. And the other thing is that I found it very hard to find people I knew to talk about it with, because it was one of the few times that I thought this marks me as somebody who’s Dutch rather than English for example, although I’m, I’ve got like a kind of multiple identity you know because there wasn’t anyone who’d been able to have that kind of experience here in the UK.

Charlotte explains why she thinks that the law should be changed in the UK to allow people to...

Charlotte explains why she thinks that the law should be changed in the UK to allow people to...

Have you got any message for health professionals or policy makers or politicians?

Definitely. Yes. I definitely think that things should change here in Britain. I just, I mean I recently watched the film that Terry Pratchett did, and that whole thing about having to leave home, having to make a decision here, having to travel somewhere different, being with people you haven’t met before, you know, puts such a lot of stress on a person who’s ill and their family, I couldn’t imagine more of a contrast to the way that my Uncle had died. You know the idea that you could do this at home, with people that you loved there who you wanted to be there, at a time when you died. I cannot see why people would think this is a bad thing to do. You know I really, really think we need to think about changing the law here.
I can see that people are concerned about pressure being put on people and you know I work in the mental health field. I know what can happen when people are depressed. I know when people feel responsible and when to be doing things to looking, to look after people.
But I think that we’re sophisticated enough in our professional, as health professionals to be able to make distinctions between people who really want to do this, and people who are pressured in one way or another. And I think it’s so important. You know what is the sense of making people die terrible deaths, I can’t see any religious spiritual or ethical reasons for people to have to do that.
You know, and I think it’s a myth to feel that the medical profession can, can medicate sufficiently so that people don’t suffer pain, you know. I’ve had so many experiences of people I know who’ve had to die and have had their last days in terrible excruciating pain, who’ve not wanted to die in that way, and neither have their family wanted them to have to do that, you know. So I find it, I cannot, I really can’t understand I suppose why people would be against it.
Previous Page
Next Page