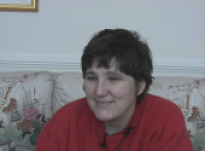 Age at interview: 37
Age at diagnosis: 33
Brief Outline: Vicky was diagnosed with Asperger syndrome when she was 33. She lives independently and has a good social life and supportive family but has found it difficult to get employment.
Background: Vicky, currently unemployed, lives alone. Ethnic background/nationality: White British.

Vicky, aged 37, lives on her own and is unemployed. Four years ago she was diagnosed with Asperger syndrome after her mother read a leaflet describing autistic spectrum disorders. Vicky leads an independent life and has an active social life with a group of people with Asperger syndrome and friends from the village where she grew up.
She finds some situations stressful and has found it difficult to find work; employers are generally inflexible and not prepared to understand her. She thinks that people with Asperger syndrome need support to find jobs that suit them.
She is very punctual and worries if people meeting her are late. Though she doesn’t need one to one support, she would like people, and particularly employers, to be more supportive generally.
Vicky has mixed feelings about her diagnosis and found it hard to take in at first. She feels that having the diagnosis has helped her to get some support but she also thinks it has hindered her opportunities of getting a job. Vicky enjoys reading, playing and working on the computer and would like to work with disabled children. Her family is very supportive and she has learnt to cope with many different situations.

Vicky finds it difficult to communicate with people.

And living with it is quite hard because there are some things I can do, but there are some things I can’t do. For instance, let’s say if this place blew up, okay I have got my parents, my parents can actually help me out, but if my parents weren’t around, and this place sort of like exploded, say of a gas leak or something, [laughs] this is just an example, my parents would think that I wouldn’t be able to cope with it, because, I mean, yes, okay, I can make phone calls, but it depends again on the situation, whether I would be able to make a phone call and say, “Look I need some help here.” And not, and yes, I possibly could if I had to but do you know what I mean, I have got to have people around that will actually support me in a crisis. And this is just an example. But I know that it wouldn’t happen but you know what I mean [laughs].

What other things do you find difficult would you say?

I find difficult sort of like communication with people. Again it depends on the situation because if I sort of.. like I go down to a pub one night a, well not one night a week, but once a month to meet up with some friends and all the people that I go with have got Asperger's. And fine, okay that is fine. But there are some people in the group that can’t even communicate or won’t even try to communicate with us. And okay, I can communicate, but there are times when they just sort of like, do things, unintentionally if you know what I mean. And it has sort of sometimes hurt people, because I have been hurt by people at that pub group. But I know that they don’t intentionally mean it. But then it would all depend on the situation that I am actually in because I know those people reasonably well I can get on with them, but let’s say if I go into another situation, into a job where I don’t know anyone at the beginning, until I have got to know them, do you know what I mean, until I have got to know them, I will find it very difficult

Vicky worries if people are late and thinks they have been involved in an accident.

Show in context
SHOW TEXT VERSION
PRINT TRANSCRIPT
Or if somebody says to me, oh I will meet you at sort of like 5 o’clock in the evening. If they sort of like, haven’t rung to actually tell me that they are still coming, like yourself. I mean you rung me to say you can’t find the place, but if somebody doesn’t ring to actually tell me that they are going to be late, I start worrying because they might have been involved in an accident or whatever, you know what I mean, I start to sort of get quite worried that these people aren’t going to turn up, and then I am sort of left on my own, wondering what to actually do. Whether to ring the police, whether to do that, because people with Asperger's like people to actually be punctual and some people can’t cope if they are not there on the right time and things like that. Okay yes, I am a bit like that. I mean if somebody said oh 12 o’clock I can cope with it, but if they don’t turn up say after about 5 minutes I begin to actually worry, because for instance, they might actually be involved in an accident or something like that, you just don’t know. But if they actually ring me like you did if they ring me like you did, it doesn’t matter because I know that they are there and going to come, they are just a bit lost [laughs]. You know what I mean.

Vicky has found that employers don't really understand that people on the spectrum need support...

Show in context
SHOW TEXT VERSION
PRINT TRANSCRIPT
The big issue is employment because unless, unless, unless people understand it, unless people actually understand what it is, you are totally going to sink, because the employer won’t give you the chance to actually prove yourself. Because I am capable let’s say of using the computer, I am capable of using it just like everyone else but they won’t give you the chance, if you know what I mean. Because they think oh she has got Asperger's or she is going to be slow at doing it which is fine. I mean if I had a job working say with somebody say with actually computers I would probably be able to do it, I would probably be able to meet their deadlines if I didn’t have the pressure of people actually breathing down my necks.
I mean that is when it will get difficult. I mean I could probably meet the deadlines which I can but providing I don’t have people actually shouting at me, breathing down my neck, saying where is it, we need it for such and such a date. If I was then told right do it, and be left alone I would be able to do it because I would not get totally stressed, but if people then start shouting at me for not having it, not doing it, that is when it will start getting a bit hard. But employment is one big issue because the government again doesn’t see it. But because they think oh people with Asperger's are normal. But what they don’t realise is they are normal but they need, depending on the situation, but they need the support to get into the job and to actually help them to find the work that is actually suited to them.
Text onlyRead below

Show in context
HIDE TEXT
PRINT TRANSCRIPT
Yes. But again, because I know the people I can go and do them but if if I had to make a phone call to say like to another group or to another person, I might find that difficult, because I would have to find out what department I would actually need, for to say if the house blew up or something like that, I would have to sort of like work out what department I need and that is where it will all start getting a bit… This is just an example, but you know what I mean. It will start getting a bit difficult because I don’t know the person at the other end and I don’t know if they would be able to help me and then they put me onto somebody else.
It would just go on like that, until you have actually found the right person and that can be frustrating, because you know where you want to go, you know what department you want to be but you know how they sometimes actually, if you have spoken on the phone, they will put you through to another person who might be able to help, and then that person can’t help, and it just goes in a complete circle. And that is when it gets really frustrating for people with Asperger's because they know what they want, but they can’t just say look. Sometimes they just won’t help you. They will put you on to somebody else, who can’t help you either and it gets so frustrating. Sometimes I just get so stressed and give up. And it is just things like that which I find so difficult.

Vicky finds her support group a place to get away from everyday situations and have a normal life.

Show in context
SHOW TEXT VERSION
PRINT TRANSCRIPT
Well, actually, it was actually my mum because she just happened to be in the library and she had read a notice about children and she sort of came up with the idea that that sounds very similar to what Vicky has got, why don’t you just sort of like…? So she went to the meeting and then it sort of, she got to know people and they said, well this person who actually running it, which was [name], said, “We are going to try and set up a pub group.” So they set it up for the older ones. We go down like every month and we sort of like try to do things together as well, like go to the theatre, go to the cinema and things like that. So it gives people a chance to get away from like every day, every day situations and try and have a normal life, if you know what I mean. Like people would go out to the cinema, out to the theatre, but people with Asperger's don’t want to go out. Do you know what I mean? They find it difficult to go out into a new situation. But if they have got somebody there, that has got Asperger's and things like that they gradually realise that they can do things for themselves. Again it depends on the situation because myself, I can actually go and do it. I do it on my own anyway but there are some people that won’t do that, won’t go out because they can’t cope with it.
Text onlyRead below

Vicky has read a lot about autism but thinks there is no one answer.