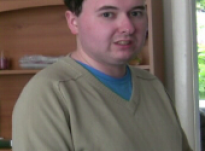 Brief Outline: Tom was diagnosed with autism as a child. He lives on his own with 24 hour support.
Background: Tom lives in independent supported living. Ethnic background/nationality: White British

Tom’s story by his mother

Tom’s lack of eye contact, unresponsiveness and uncanny placidity concerned Susan, but it took her three years to get a diagnosis of “complex communication disorder with autistic tendencies” when he was 4, in preference to deafness, spoiling by older sister and poor mothering.
Tom at five, was unable to speak, but the LEA was insisting on a mainstream primary school' a major battle gained him access to an excellent special school – The Rowan. He learned, slowly, to speak single words, to do sums, to accept being in a small class with much one-to-one support. It was here that the doctor finally told us he was severely autistic.
There were two years of great aggression towards us at age 8 and 9; an educational psychologist visited and said she could offer us no advice but noted how well we were coping!
At age 11, Tom settled a little, possibly because his grasp of daily routines and language improved. We are not sure. His diet broadened a little from crisps, bread and jam to include chicken nuggets and chips. He also developed a passion for pre-school cartoons that has only intensified since. He knows them all, lives their lives and watches certain stretches repeatedly.
Also at 11 he started at the excellent Bents Green special school. His number work developed; the rest of the curriculum less so. He knew his fellow students, but could not, of course, develop friendships. In year 8, he started a one-night a week residential, becoming two nights in year 9, an experience that helped to ease him away from total dependence on us. The staff all loved him. He learned to accept assemblies and added cake and kit-kats and some fruits to his food repertoire; despite his diet he was never ill but his waist line was expanding.
An enormous and exceptionally stressful battle with the LEA won him funding to a termly-boarding college in Derbyshire, aged 16-19. Major changes like the first day at school and going to a boarding college troubled him less than finding a pea on his plate or hearing the words “delicious” or “together”.
Tom made further progress in these years, broadened his curriculum, went walking and gained further, if limited, social skills.
Another major battle gained LSC funding for a three year termly boarding placement at the Pennine Camphill Community in Wakefield. His art developed well, and he draws cartons of pre-school video characters with great accomplishment! He has a distinctive and engaging style and his framed picture adorn our walls. He worked a little with farm animals at the Pennine, and became skilled at weaving to the level of selling products he had woven at craft fairs at the same time as not being able to tie his shoe laces and having no road sense at.
The Pennine was very much a do-things-together community, and Tom never really coped with this, preferring to spend many hours in his own room. He became increasingly good at writing lists, and now does so to the point of obsession; mainly of cartoon programmes and characters by the hundred, all in alphabetical order. He even has them framed on his walls!
At 16, Tom found a week’s holiday too stressful, and now will accept a maximum of two nights twice a year. These are on hold at present, however, because when the unpredictable happens (i.e. every holiday) he has become distressingly aggressive.
Further battles with the council and DWP secured a family-funded shared ownership with Advance Housing, in 2008. He lives there, five miles from us, with 24'7 support from Dimensions UK. The funding formula under SDS is still in dispute, three months at a time of temporary funding being the present worrying regime. Tom goes to weaving, to an expensive day service, the cinema, swimming and the gym each week. He comes to us for one weekend in four. Employment for him is out of the question.
Much of the time he is adorable. He is, however, highly stressed if his routine changes. Worsened behaviour then appears. He tries to control us two completely, and at present can only cope with one of us at a time; a development we are finding difficult to cope with.

CM' Cinema. You like to watch all the new releases, don’t ya? What did you go and see on Saturday, can you remember?

CM' You went to Cinema World. […]And then Sunday, what do you do on a Sunday?

CM' You just have a nice relaxing day on a Sunday, don’t ya?

CM' Either play your Wii…

CM' …or you go shopping or whatever he needs to do.

CM' But generally quite busy. Who comes and takes you out for meals?

CM' Yeah, who do you go out for meals with?

CM' Who do you go to the pub with?

CM' Sophie, and he’s got some friends called Elaine and Lizzy…

R' [Interrupts Not so loud please]

CM' …and they come and take you to the, take you out to the pub don’t they, for your tea.

CM' It’s fine Tom then. Have you finished or would you like to talk to Sara some more?

I' Can I ask you some questions Tom?

R' Not so loud, Sophie. [inaudible]

I' What’s your favourite computer game?