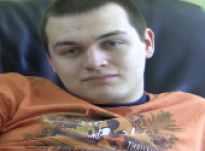 Age at interview: 22
Age at diagnosis: 2
Brief Outline: Richard, aged 22, was diagnosed with autism when he was just over two years old. He lives in independent supported living accommodation.
Background: Richard is 22 years old, single and unemployed.

Richard, aged 22, describes himself as having high functioning autism and lives in independent supported living accommodation close to his parents’ house. He has lived in his new home for a year now and describes good and bad parts to the year. He gets on well with his housemates, though they can sometimes be irritating, and he finds the staff very helpful. He has a very close relationship with his parents and older brother who he visits regularly. He is currently working on independent travel training so that he can increase his independence and go out on his own.
Richard describes being obsessed with computer games and has a range of consoles including Sega Megadrive and Super Nintendo. He plays games a lot but also enjoys hanging out with his friends, playing pool, going on the internet and watching television. He is doing a catering course at college but in the long run would like to do a business course and run his own internet café/video arcade.

Richard didn't know what autism meant until later in his life.

Show in context
SHOW TEXT VERSION
PRINT TRANSCRIPT
Your mum said you were diagnosed when you were very young. So you’ve grown up always knowing that you’ve got autism?
Not until maybe my tweens. I may have heard some stuff about autism, but I didn’t know what it meant until pretty later in my life. I think I may have known what it is when I was in my tweens.
And what does it mean to you now?
It’s really hard for me to say to be honest.
Did you want to try or not?
Maybe some other time.

Richard feels uncomfortable about jokes made by a member of staff.

Show in context
SHOW TEXT VERSION
PRINT TRANSCRIPT
Are the staff helpful there where you live?
Yes, I may very rarely have the odd issue with them. Such as one staff member trying to joke with us and not admit he’s joking for a while, and it can get really annoying.
When you say he sort of jokes with you. What he’s joking but you don’t think..?
Yes, he’s joking. I can read between the lines and I can tell he’s joking but he doesn’t want to admit it. I think he’s just messing around in a way which makes me feel uncomfortable.
So he’s sort of winding you up you think?
It’s not like he does it all the time.
Does he know he’s doing it do you think?
Yes.

Richard has various friends that he plays games and watches television with.

Richard is having independent travel training and likes going out.

Show in context
SHOW TEXT VERSION
PRINT TRANSCRIPT
I go out whenever I want most of the time. I almost always have someone accompanying me. We’re working on my independent travel training. It’s a step towards being able to go out unsupervised.
Would you like that?
Yes.
What sort of places would you go to?
The video arcade, the internet café, the library, the café and anywhere else I cannot think of off the top of my head.
And your travel training is that going well?
I think it’s going pretty good, thank you very much.
What sort of things would you find difficult about travelling on your own?
Crossing the road. Sometimes I might have trouble finding a place I don’t recognise. Judging how fast vehicles are going and coming on to me. And that’s all I can really think of.

Richard lives with 'a lot of folk with less functioning autism' in a supported house.

Show in context
SHOW TEXT VERSION
PRINT TRANSCRIPT
And do you live with your family or… on your own?
I alternate. I live with my family a lot of the time, but more of the time I’m with the folk at this supported living house that I live at, which is within walking distance from my own house.
And which folk do you live with then?
A lot of folk with less functioning autism than me.
So what’s that like, living with them?
Not too bad, but they can be a bit annoying at times.
Can you give me some examples of that?
One resident only ever talks about being sick. I find that rather annoying. There’s this other resident who’s overly obsessed with transport and that’s seemingly to be the only thing he ever really wants to talk about. Some of the folk are pretty high functioning, but not as high as me. [name]’s a good guy, although he has trouble understanding things. I’ve also got a flatmate called [name] who lives in the upper flats with me. He’s a decent guy, he’s pretty quiet and a pretty fussy eater. Well more of a fussy eater than I am.

Richard needed the help of support staff to end a relationship

This one girl who started [housing organisation] a few months ago... I have never been ready for love. I’m still not ready for love. At one time this girl just kept pressuring me into being her boyfriend. Bombarded my phone with texts, and I felt had no choice but to just give in and be her girlfriend, be her boyfriend rather.
Yes.
But, but fortunately I was able to let her down gently two nights later, with some help from the staff.
And now you still live with her, but she’s not your girlfriend?
Yes.
Yes, and that’s okay.
Hm, hm.
Previous Page
Next Page