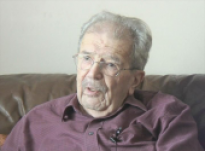 Age at interview: 83
Age at diagnosis: 80
Brief Outline: Despite some difficult times, Myrtle describes being incredibly fond of her husband and, when she was in ill health for a number of years, Peter looked after her like 'an angel'. Peter was diagnosed with Asperger syndrome when he was 80. He is having counseling which is helping him to become more aware of the extremes of his behaviour and to control his temper.
Background: Peter, a retired scientist and Myrtle, a retired actress, have been married for 57 years and have one son aged 53. Ethnic background/nationality: White British

Peter and his wife, Myrtle, have been married for 57 years and have one son. Three years ago Peter was diagnosed with Asperger syndrome after he read a book which described his lack of empathy and lack of engagement with his surroundings. Peter has been counselled for the past three years, and has become more aware of the extremes of his behaviour, such as intolerance, and to control his temper.

Peter has always focused on things that interest him and is, by nature, a loner. He has had an obsession with time since childhood and is often very rude to people without thinking about it. He enjoyed a fascinating childhood in Vienna from which developed a lifelong love of music and the arts. His career as a scientist has been very successful.

Myrtle, a former actress, describes having made significant compromises in her life to adapt to Peter’s ways; she often felt lonely during their marriage. Retirement has been particularly difficult and both Peter and Myrtle have suffered from stress and depression.

Peter read a leaflet at the doctor's surgery and found that 90% of the symptoms described fitted...

Show in context
HIDE TEXT
PRINT TRANSCRIPT
But what also happened is I found a leaflet at our surgery on Asperger syndrome and I went through it and found 90% of the symptoms they discussed fitted me and there was a phone line to a group called Asperger's support for families in [county]. And I got in touch with them and they have given me literature and suggested various matters I should read and so on. And I was amazed to find that many, many of the things which both of us found very strange that I had done or the way I had behaved fitted in this sort of total disregard of what was going on around me.
It was a sort of strange coincidence on Monday when I saw my counsellor she said to me, “Do you find many people bump into you in the supermarket?” And I said, “Yes.” And she said have you ever thought that you are bumping into them because you don’t look round, you don’t observe them. And I said, “You are probably right.” And there was a case this morning. We were…Myrtle just sort of said, “Didn’t you see the woman.” And I said, “No I didn’t.” And she was what two feet away from me. Because I don’t know what I was thinking of, but certainly I wasn’t think about anybody being there. I was thinking about, “Oh we have got to get some milk that we can freeze. You know it doesn’t mean that I can only concentrate on one thing. I can only put it this way; I can concentrate on what really interests me.

Peter describes how he will walk out of the room when Myrtle is talking not realising there is...

Show in context
SHOW TEXT VERSION
PRINT TRANSCRIPT
I am perfectly content put it that way to sit and read what interests me and forget there is anybody around. Myrtle says I sit there and I might as well be in a library where nobody is allowed to talk because I can sit and not say anything. Or that she will say something and it will just, you know bounce off, I won’t react to it. Or I think when we are talking that whatever she had to say she has finished and I will walk out not realising that there is a lot more that should be said. I am beginning to realise that but throughout my life up to now I hadn’t really thought of that. I’ve just felt, well I want to go and do this, so what. And I have had very little patience with say, people who haven’t had to …as Myrtle says I have been extremely lucky in my vocation and able to absorb things easily, who haven’t got my knowledge or experience and education and I sort of feel well why should I bother with you.

Peter lost his licence after taking his key out of the ignition and waiting when it was his right...

Peter' I feel, I wouldn’t say remorse, that is perhaps the wrong word, I feel like these are things I needn’t have done and life could have been a lot better if I had recognized that these are things, okay, Asperger's it is not an illness, but it is …

Peter' An affliction or something. There are ways and means of coping with it. Instead of just, you know, continuing and doing things, and believing that whatever you did was right. That this was my right to do this.

Myrtle' This is a word he uses a lot. It is my right.

Peter' You know when it comes to driving. I’ve lost my licence now for it, but that I couldn’t understand, couldn’t accept that somebody, for instance would not wait when there was an obstruction on their side of the road. To me, it was my right of way come what may and …

Myrtle' There would be an impasse.

Peter' And I would sort of not have an impact but I could take the key out of ignition and put it on the dashboard and sit like this and just wait for what happened. I’d think well you are wrong; you’d better get out of the way. And I mean that’s behaviour you can’t continue. I realise that now, but this is only partly through counselling, partly through reading about it, and partly through Myrtle having infinite patience with me and with telling me you know calm down.

Peter, a retired scientist, talks about how he expected 100% work from his staff.

Show in context
SHOW TEXT VERSION
PRINT TRANSCRIPT
But the whole thing was that I was very fortunate, basically from the age of about 26, 27, I was more or less my own boss. I had my own department and I selected my staff and so on. In London I had a secretary who stayed with me for nineteen years. Well obviously I didn’t exactly mistreat her or anything like that. I expected a hundred per cent work. I didn’t like coming in late. I always made a point of being there before anybody got in. What used to infuriate me was if I wanted to talk to somebody, if they were having a private phone call. And if this went on after I counted one, two, three I would put my hand on the receiver and you know stop their conversation. But people understood that is what I …. On the other hand I was always very loyal to my staff. And also always I had always bosses who understood me and I never had any real compromise. Well I mean at my interviews to my directors always understood me. I never had any quarrels with them.
Previous Page
Next Page