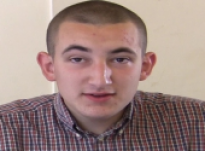 Age at interview: 16
Age at diagnosis: 12
Brief Outline: Martin was diagnosed with Asperger syndrome aged 12. His mother and older brother have since been diagnosed too.
Background: Martin, a student, lives with his mother. Ethnic background/nationality: White British

Martin was diagnosed with Asperger syndrome in his early teens. His mother and older brother have since been diagnosed with AS. The diagnosis meant little to Martin, just “extra paperwork” to his name though he does think that people with AS are more interesting. He has found that the diagnosis allows him to access support at college which is good though he doesn’t like college as there were too many people there.

Martin describes how he has always enjoyed his own company and people irritate him. He enjoys reading, walking the dogs, listening to music and going on the internet. He isn’t sure what he wants to do in the future but would like to work outdoors.

Martin likes not being 'an ordinary Joe'.

Show in context
SHOW TEXT VERSION
PRINT TRANSCRIPT
I would say it’s good really. Like I say it does make you different. You get the learning contract and everything. It has its uses at least, you know. I’m not that much different from other people anyway I don’t think.
You said it makes you more interesting. Can you say why? What you mean by that?
Well, you’re just not as bland, you’re not an ordinary Joe are you? You know, it’s quite nice really. More fun as well [laughs]. Different.
More fun, can you give me an example?
Well me and her always have a laugh you know. To get around a supermarket you’ve got to have baguette fights with her and everything like that which it’s quite fun really. I don’t mind. You know [laughs].

People irritate Martin who prefers his own company.

Show in context
SHOW TEXT VERSION
PRINT TRANSCRIPT
Are you quite happy to sort of hang out on your own?
Yes, I’ve always preferred me own company. People irritate me.
In what ways do they irritate you?
Just everything they do; breathe, talk, get in your way in the middle of bloody ASDA, look at yer.
So how would you describe having Asperger's Syndrome to somebody who didn’t know what it was?
It’s like being a normal person really; it’s just that you’re more interesting. You don’t get on as well with people. That’s basically how I’d describe it.
Previous Page
Next Page