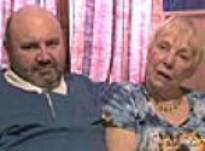 Age at interview: 53
Brief Outline: Howard, 53, was diagnosed with autism when he was in his teens. He worked at a bakery for over twenty years, then returned to university where he did an HND in computer science.
Background: Barbara, a retired social worker, and her son, Howard, live together. Ethnic background/nationality: White British

Howard, 53, lives with his mother, Barbara. Howard was diagnosed with autism in his teens after Barbara read something about autism and went to the doctor’s to get a referral for diagnosis.

When he left school, Howard worked as a post office cleaner and then at a bakery for twenty one years before he was made redundant. He was bullied at both school and at the bakery and dealt with this by developing a very good sense of humour. About seven years ago Barbara and Howard signed up for part time computer courses and became hooked; Howard became so proficient that his tutor’s nicknamed him “cyber-junkie”. They both gained BTEC diplomas in computer studies and three years ago Howard graduated with an HND in computer science.

Howard has a strong interest in trains and buses and enjoys going to vintage rallies and playing on his train simulators. He enjoys music, particularly The Stone Roses and Tenacious D.

Howard: Yes. I have still got the occasional bus rides or I go up on my computer a lot. Going on the internet and also playing on my train simulators as well.

Barbara: Yes in a way things do turn out sometimes because if he had still been wanting to go on his trips as he used to, we couldn’t have afforded it, with the train fares.

Howard: The train fares have gone up.
Barbara: So he only goes occasionally if there is something really special.
Howard: Yes.
Barbara: Certain people you know. You would probably see [name] etc. I have always said, “Well look, invite him round.” I know it’s a waste of breath. Now we got hooked on computers and then I got, first of all we got one simulator and you worked your way up to Microsoft trains. And of course he goes to all these different countries and with the games he can download trains, he can build railways, download trains.
Howard: Yes.
Barbara: Because sometimes I look on the web and I see all these Chinese and I say Howard how do you know which to click on and of course he is so used to it now, because there was even French…
Howard: Yes. Russian as well.
Barbara: I have got him dictionaries, German English German dictionary. And he goes to all these countries and I say “Well how did you get there?” “Oh I went to China via Australia”.

Barbara: And of course we did some programming. I don’t know whether that helped you, but he got all this gobbledygook. And I don’t know whether you are supposed to do it or not, but he does it, well these simulators and he gets all this stuff and he alters it to adjust to how he wants it, you know.

So does your simulator beat the real thing or do you still like to go on real train journeys?

Howard: Well a bit of both really.

And what is your favourite train journey in the UK?

Howard: Well I can’t really say I have a particular favourite.

Howard: I have been up to Scotland.

Howard: Yes. That is when they used to run the excursions then.

Barbara: And didn’t you used to, there was the one, you were overnight at some of them.
Howard: Yes. It was an overnight trip, yes.

Barbara: And he would come back ….

Were you sleeping on the train?

Barbara: And he come back home and … [laugh] he would be quite grubby wouldn’t you.
Howard: Hm.
Barbara: Because he would be, you know.
Howard: But this would be over twenty years ago.
Previous Page
Next Page