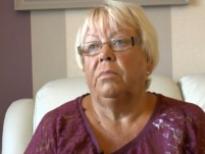 Age at interview: 62
Brief Outline: Pat has high blood pressure, claudication of the arteries and multiple other health problems without a clear diagnosis. She feels frustrated that she can’t do the things she used to enjoy and hopes that currently ongoing investigations in primary and secondary care may lead to treatment that can help her regain a better quality of life.
Background: Pat worked as a Health Services Assistant until she had to take early retirement in 2007 due to ill health. She lives with her husband. They have 3 children and 6 grandchildren. Ethnic background: White British.

Pat has high blood pressure, claudication of the arteries and multiple other health problems that currently remain without a clear diagnosis. Several years ago she had stents fitted into her legs but she still can’t walk very far and quickly gets out of breath. Sometimes even having a shower can make her feel so exhausted that she needs to lie down afterwards. When going on a plane for holidays, her legs swell up to the extent that she can only wear shoes two sizes up from her normal size. In 2007, Pat had to take early retirement on the grounds of ill health. She feels saddened that she can’t really enjoy her retirement due to her current poor quality of life.

Pat currently takes 8 different kinds of tablets, including amlodipine, nicorandil, ramipril, clopidogrel, atorvastatin, citalopram, immodium, and lansoprazole. She dislikes having to take so many drugs but has been told they are her ‘staying alive tablets’. Her husband makes sure she takes everything according to prescription. Pat has experienced side effects from her various medications, such as headaches, nausea and a dry mouth. She has tried different statins in the past but finds she is tolerating the current one well (atorvastatin). She does not usually bother reading the information leaflets supplied with her medication as she’d rather not know everything that could happen. She trusts the pharmacist at her health centre to check that her various medications are compatible with each other.

Pat also gets intermittent severe lower back pain and at one point was prescribed morphine patches to cope with the pain. However, she now regularly uses a chiropractor for whom she pays privately when the pain gets too bad. She is not quite sure what he actually does, but says she comes out of the appointments with the pain gone and “feeling 10 foot tall”.

Pat has also experienced two mini-strokes (TIAs or Transient Ischaemic Attacks) For the last two years this has not reoccurred, but she does experience dizziness when she moves her head too quickly to one side. Initially she thought this was due to vertigo, but an MRI scan suggested that it may be connected to claudication in her coronary artery. She feels frustrated that she is currently unable to do a lot of the things she used to enjoy such as keeping her home immaculate. She tries to find one thing every day that she can do and to not get too stressed about all the things she can’t.

Last year, Pat asked her GP to refer her for some thorough investigations to get to the bottom of her various health problems. X-rays on her back found that that there was wear and tear from her job as she used to do heavy lifting, which may account for her back pain. Blood tests at her surgery revealed a reduced kidney function and the presence of an infection, so she was booked in for further monthly tests to keep an eye on this. However, she has not received any feedback on these test results and what they might mean. Health professionals have advised Pat that she needs to lose weight and she joined weight watchers a few months ago as she wants to do as much as she can to help herself. She has not had any more specific advice on diet or lifestyle from health professionals, but she does not smoke or drink alcohol.

Pat has had kidney stones and gall stones in the past and also had a history of frequent urinary tract infections. After she had keyhole surgery to remove the scar tissue from an earlier hysterectomy, the water infections have become much less frequent and severe. Pat also has a family history of kidney problems: her brother was born with three kidneys and her sister, who was also prone to frequent water infections, was recently diagnosed with kidney cancer. They also discovered that on her mother’s side of the family, several relatives had died from kidney or bowel cancers. Being told that her kidneys weren’t working properly felt quite worrying to her.

Pat’s plea to help her get to the bottom of her problems has been responded to with referrals for various tests and investigations in secondary and primary care which are still ongoing, but she describes how the consultations she has had since have lacked compassion. She used to see a doctor who had known her from when she was a baby but has not managed to build the same sort of bond with any of the current GPs at her surgery. She feels that consultation times are too short and doctors too busy to tackle her health problems in their full complexity. She would like better follow-up and feedback on the various tests she has been having, but also admits that sometimes she just feels like ‘burying her head in the sand’ and has not asked the doctors the questions that were on her mind for fear of what the answers might be.

Most recently, Pat was referred on for an echo-cardiogram and is still waiting for that appointment. She very much hopes that the ongoing tests may eventually lead to treatment that can help her regain a better quality of life.

Pat has ongoing investigations to detect the causes of her multiple health problems. Her GP ordered monthly blood tests after she consulted about yellowing of the whites in her eyes.

Pat has ongoing investigations to detect the causes of her multiple health problems. Her GP ordered monthly blood tests after she consulted about yellowing of the whites in her eyes.

View topic summary
SHOW TEXT VERSION
PRINT TRANSCRIPT
It was a routine check-up. Oh no the other… I don’t… Oh yes it got nothing to do with it I don’t think. I did ask about the yellowness of my eyes.

The whites of your eyes?

And I asked about that on this particular occasion when I was there. I said, "My eyes… whites of my eyes have gone yellow." …Whether that had anything to do with the blood tests I had done I don’t know. Anyway I had these blood tests and that’s when… one doctor said… I had a little problem so I went back to the doctor that sent me for it anyway and he said my kidneys weren’t functioning properly. So he said, "What we've got to do is keep an eye on them… and so every month you have blood tests to make sure that they're functioning."

And I don’t know whether anybody's followed-up on that, I don’t know. So in all fairness, like I said, you get five minutes…you ain’t got time to ask all these questions – “what about my kidneys, are they OK now?”…Nobody's saying.

But ever since last year then – so this was last…?

I had…it must have been in about the February because I- I had blood tests done every month. I had a long list of them to go in and I- the last one I've had was October I think yeah.

Pat is frustrated by the lack of information about her test results and feels that her GPs are not interested in her; she has felt unable to ask questions in the past.

Pat is frustrated by the lack of information about her test results and feels that her GPs are not interested in her; she has felt unable to ask questions in the past.

View topic summary
SHOW TEXT VERSION
PRINT TRANSCRIPT
OK and how would you then get the result of your test?

You don’t get the results back?

Do you phone up to get told if there's a problem?

No, no. They only tell you if there is a problem… and that’s it.

So what kind of things did you get out having these blood tests month by month?

Because I mean were there any positives for you in having them?

No, because nobody told me anything, they never mentioned it again. I think if I don’t ask… then they're not going to be- then that’s it.

Because you're like [sighs]… trouble is with now you're like, oh number twenty six [shakes her head], you're not going to get told anything unless it's… important, relevant to when you go in there that time. Nobody… there isn’t no… whereas there used to be… … somebody… well, when you're having investigations there's usually… you expect follow-up, don’t you? Well, you're not getting a follow-up. It's not what's happening.

So when you go and see the nurse for your blood test or when you did it last year, did they at least tell you what it was… the last time?

Do you feel able to ask questions when you see the doctor or the nurse?

No, no. Not really

Right. It must be very, very unsatisfactory for you to have all these tests and not get any answers?

Pat plans to prepare a list of questions about her kidney health for her next GP appointment. It’s difficult to ask all she wants to know when appointment time is pressured.

Pat plans to prepare a list of questions about her kidney health for her next GP appointment. It’s difficult to ask all she wants to know when appointment time is pressured.

View topic summary
SHOW TEXT VERSION
PRINT TRANSCRIPT
Do you feel in any way reassured by having the tests?

Or is there anything they can do about it.

And let me know what the results of tests- of tests that I have; it's no good saying to me, "Well yeah you're fine."

But the problem is you see when you go to the doctors you're allowed each patient, five minutes.

No, five. And the problem is …you’ve got to… when you're going, you save it all up to say little things that are wrong … and then you get there and you’ve got five minutes… I've got to ask, you know, I've got to think, what's most important.

And so I… so it might only be a little thing, might even be at the bottom because I've got to do the important things first.

Pat said she doesn’t like taking pills and would be inclined to only take those she considered most important if it wasn’t that her husband ensures she takes them all. She calls them her ‘staying alive tablets’.

Pat said she doesn’t like taking pills and would be inclined to only take those she considered most important if it wasn’t that her husband ensures she takes them all. She calls them her ‘staying alive tablets’.

View topic summary
SHOW TEXT VERSION
PRINT TRANSCRIPT
And how do you feel about being on this amount of medication?

I'll don’t like taking these tablets, I've got to say. I'm not a very good tablet taker; I won't take paracetamol, I don’t take nothing. My husband makes sure I take those tablets every day.

He checks with you?

Well I was just wondering whether you'd ever said to the doctor, "Do I really need to take this?”; “I am not keen on taking this."