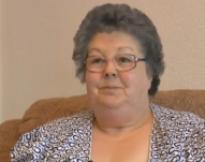 Age at interview: 70
Brief Outline: Joan has Type 2 diabetes, but her main health concern is bladder dysfunction and back pain caused by a compression of nerves in her spine (cauda equina syndrome). Her medical records state she has had CKD since 1997 but she was never told, even though she regularly asked about her kidney health at her diabetes check-ups.
Background: Joan is a retired cake decorator and now runs a community and day centre for elderly and disabled people. She is divorced, has 2 daughters, 2 grandchildren, and lives with a lodger. Ethnic background: White British.

Joan has had insulin-dependent Type 2 diabetes for many years. She is an active member of Diabetes UK and also runs a community centre for older people near her home.

For the past six years, Joan has been suffering increasingly badly from back pain. She has difficulty moving her legs and trouble passing urine when she needs to. She also gets frequent bladder infections. It is thought that these problems are related and caused by a compression of the nerves in her spine (cauda equine syndrome) stemming from a historic injury over thirty years ago when Joan was gravely injured by her ex-husband after a domestic argument. She has had several operations on her back in the past and was supposed to have a coflex fitted to stabilise her spine in 2009. However, an x-ray taken a few months later showed there was no coflex and a different type of operation had been performed without her knowledge.

After almost three decades without major problems, Joan now experiences severe pain on a daily basis and has trouble sleeping at night. She currently takes diazepam and paracetamol, but finds the pain relief she gets from these drugs inadequate. She had to stop taking codeine as it made her very constipated. She also takes omeprazole for acid reflux.

Joan eats a healthy diet with lots of vegetables and does not smoke or drink alcohol. She is keen to lose weight so she can have another operation on her spine, but as she cannot walk unaided it is very hard for her to take exercise. Previously, she had managed to lose 6 stone by walking, which also had helped her to control her blood sugar, but since she became immobilized she has put most of the weight back on again. Joan finds it hard that she can’t move about or potter about in her garden and sometimes she feels quite low. She describes some of the health professionals she has come into contact with in her quest to achieve better health as unsupportive and incompetent. She would like doctors to take more time to listen and empathise, even when they can’t solve the problem.

Joan is a great believer in taking control of her own health but thinks health professionals could do more to help patients help themselves. Through information from her Diabetes UK support group, she was aware that people with diabetes have an increased risk of developing kidney problems. When attending check-ups at her GP practice, Joan would ask about her kidney health and had always been told that her kidneys were ‘perfectly normal’. Therefore she was shocked when a nurse, during the course of inviting her to this study, told her that she had Chronic Kidney Disease, Stage 3, and that this had been recorded in her medical record as long ago as 1997. Joan would like to know more about the meaning of the different CKD stages, whether her kidney impairment is related to the ongoing problems she is experiencing with passing urine and frequent bladder infections, and what she can do to help herself.

Joan only found out about her kidney impairment when the diabetes nurse invited her to take part in this study. Whenever she had asked the doctors about her kidneys before she had been told they were ‘fine’.

Joan only found out about her kidney impairment when the diabetes nurse invited her to take part in this study. Whenever she had asked the doctors about her kidneys before she had been told they were ‘fine’.

View topic summary
SHOW TEXT VERSION
PRINT TRANSCRIPT
I went for my normal routine check up to have blood tests and blood pressure and water and that. And my diabetic nurse came in with the nurse that was doing the test to send away to have the results come back and she asked me if I’d like to join this programme that you’re running. And I asked her what it was about and she explained in my language that it was due to kidney problems. And I went into defensive mode. I said, “No, I’ve never had kidney problems. I haven’t got kidney problems with diabetes. It’s you know, I’ve been told everything was all right.” And then she told me that I had a kidney problem that was being monitored regularly and I asked her, “How long have I had it? Can you tell me when it was diagnosed?” And she said in nineteen ninety seven, which was an absolute shock. [laughs]

We had a short discussion because she had to go and see to other patients and she was under the impression I knew. But my daughter and I had been to the doctors when the results came through before, and I’d asked about kidneys and they’d always said, “No, they’re fine.” So this really was a bit of a…

A shock. I laughed about it at first. I thought that it was a bit of a mix up.

But now I understand there isn’t but yet I haven’t had it explained to me quite what it entails or what it’s about. It’s something I’ve got to go back and have a chat about.

The nurse who invited Joan to take part in research on kidney health had assumed that Joan knew she had CKD. However, whenever Joan had asked at check-ups, she had been told her kidneys were ‘normal’

The nurse who invited Joan to take part in research on kidney health had assumed that Joan knew she had CKD. However, whenever Joan had asked at check-ups, she had been told her kidneys were ‘normal’

View topic summary
SHOW TEXT VERSION
PRINT TRANSCRIPT
That’s what she actually said, the, when she first came in, “There’s a study going on: CKD.” Didn’t mean anything. I didn’t know that.

There’s been guidelines since two thousand and eight for GPs to code people whose kidney function is decreased to a certain level under that heading.

But, obviously, it sounds like you have actually been coded quite a while back.

Yes, but I’ve, word of mouth. When I’ve asked, you know, I’ve always been told “no kidney problems”. So, when I did ask and one thing I did ask, when I was in and the two nurses told me, was… “Can you tell me when it was diagnosed then?”

How can you fix something if you can’t, you know, you need to know, knowledge is- is power really isn’t it?

What messages would you give to other people who are having their kidney function monitored?

I guess there’s a sort of maybe two different ways of looking at “alright”.

So “alright” might mean there isn’t a current problem.

But it doesn’t mean they are a hundred per cent. So…

Yeah. But knowing my daughter came with me to the last tests I had done and she asked the question, which come out of the blue because I didn’t even think of it, and the doctor, which I saw, “no problem”.

What made her ask the question?

She read up on things that can go wrong with diabetes.

Yeah. Yeah. So she did actually voice it and I didn’t know she was going to do that either but we did get a definite, “nothing wrong”, “perfectly normal”. “Perfectly normal”, that is the words he used.

So normal for what? [laughs].

Right. What messages would you give to health professionals looking after people like yourself, with a decrease in kidney function?

Please try and listen as well as talk. Probably the wrong things to say but a lot of the time there’s no eye contact, there’s no… no visible taking notice or conversing in a way. They’re either writing, when they’re talking to you… or… doing prescriptions or something. Just give you the honour to look at you and speak.

Try and tell the person if there’s something that isn’t quite right or let the person ask a question. That would satisfy a lot of people.

Joan is unsure about the meaning of stages within CKD. She had much more detailed information when she was diagnosed with diabetes.

Joan is unsure about the meaning of stages within CKD. She had much more detailed information when she was diagnosed with diabetes.

View topic summary
SHOW TEXT VERSION
PRINT TRANSCRIPT
And what kinds of things are the questions that you would like to ask about your kidney problem?

How far the problem is because, when they told me that stage three …it doesn’t mean anything. It it’s just something I don’t understand. And as I said, unfortunately, they didn’t have time to talk to me about it. Obviously, there’s been a stage one and a two. I don’t know what that was about? ...It would have been nice probably to have been able to tackle the problem or at least understand it by being told… as you get over the shock when you’ve got diabetes, they tell you about all the things that can happen to you regarding heart, legs, sight… but please tell us about the kidneys. That would help [laughs].
Previous Page
Next Page