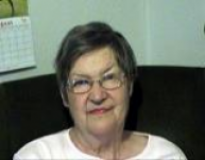 She only knew what had really happened because she was given a diary of her time in hospital.

She only knew what had really happened because she was given a diary of her time in hospital.

View topic summary
SHOW TEXT VERSION
PRINT TRANSCRIPT
So therefore I went into hospital on the 19th of January and I was operated on the 20th. And the surgeon managed to remove all of the lump because at first they thought I'd have to have radiotherapy but the surgeon was able to do it all in one operation. So that was alright.

So like the operation was the 20th of January but on the 31st of January the surgeon came round and said I'd be able to go home in a couple of days. And I took myself off to have a shower and shampoo and, while I was in there, I suddenly felt very breathless and I had to pull the cord and I managed to open the door and shout "Wheelchair, oxygen". And I can't remember anything after that, but in fact I had written that in my diary but that's what I said.

Physiotherapists, carers and an occupational therapist helped her until she was strong enough to...

Physiotherapists, carers and an occupational therapist helped her until she was strong enough to...

View topic summary
SHOW TEXT VERSION
PRINT TRANSCRIPT
When I came home I had a package and I had carers coming in three times a day. One to get me up on the morning and help with the shower. Get my breakfast if necessary for me and one at lunchtime to put something in the microwave. But after a few days I was able to do that myself and somebody would come in the evening to get me ready for bed. And that could vary anything from seven o'clock in the morning and one didn't come until quarter to twelve.

[laughs] Yes. And I also had a physiotherapist coming to the house and an occupational therapist and that was the first six weeks. If I needed it after then, they would have discussed whether I needed it and I had to pay for it. The physiotherapist the first couple of weeks, he came three times a week which was very good and they'd take me down the road for a walk and now I'd come back and do exercises laying on the bed and then some sitting on a chair and then out in the kitchen with one hand on the sink unit and do some more exercises that way. And so it was quite intense, if you know, quite tired after that [laughs].

And the occupational therapist, she took me up to Waitrose and to do some shopping. She suggested I should walk but I didn't feel, especially it was very hot at that time, didn't feel I could walk all that way so she took me in her car. And she also took me to the optician.