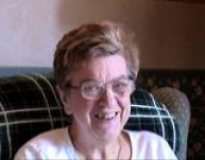 Age at interview: 57
Brief Outline: Was admitted to intensive care in 2004 because of a perforated duodenal ulcer and septicaemia. Spent 29 days in intensive care, about 6 weeks in a general ward, and 6 weeks in a rehabilitation hospital.
Background: Occupation: PA for ambulance service. Marital status: single. Number of children: no children. Ethnic background: White British.

She would rather have a bit of pain than hallucinations caused by morphine.

She would rather have a bit of pain than hallucinations caused by morphine.

View topic summary
SHOW TEXT VERSION
PRINT TRANSCRIPT
At that time were you having hallucinations as well?

Not, not then. No. No. I only had those for two or three days after I came round, you know, came out of the sedation because I just didn't like the you know, the thing, you closed your eyes and what have you, you could see, I used to see Alice in Wonderland and you know the Mad Hatter. I used to see these huge great big rabbits and things like that. And like the big black holes, although it was light but it was a big black hole, but you could see into it. And things used to move so fast. Lights used to go past so quickly and it was just a horrible, horrible feeling. If that's what taking drugs does to you, then no thank you very much. Not for pleasure.

Did you know it was the morphine?

That's what I gathered it would be because obviously most drugs can, could give you some sort of side effects. But I did manage to ask somebody what it could be and they said, "It's probably the morphine." And then, you know, I said, "Well I don't like it." But they said, "You need it for the pain." I said, "I'm sorry but you're going to have to give me something else. I cannot, I'd rather be in pain than have that." So they gave me Tramadol. They managed to take the morphine away and give me Tramadol instead.

Was that just as good for the pain?

It was not quite as good but, as I say, I'd rather have a bit of pain than, than live with those hallucinogenic things. They were horrible, horrible, hated it.

She described having her first bath in months at the rehabilitation hospital, and the time she...

She described having her first bath in months at the rehabilitation hospital, and the time she...

View topic summary
SHOW TEXT VERSION
PRINT TRANSCRIPT
I went there because, obviously, it's allowing you to have a bath. They'd bring this special chair along and sit you in it, an electric chair, a hoist thing, and take you and then put you into bath, which goes up and down. And as I remember, oh that was luxury, oh that really, that was bliss, that was. A bath after about well three months, nearly four, two months for me, two months for me, a bath it was lovely.

In that six weeks, did you have the chance to talk to other people there as well...?

Yes, yeah, yeah, obviously with the cottage I was in, it was really mainly for older people, but, you know, by older people, I mean people in their seventies and eighties. But because of my disability anyway and the fact that it was taking me so long to get my strength back, they felt it was a good place for me to be. I didn't feel too bad because there was another young lady came along after awhile as well. But I mean, as I say, you know, they all may be in their seventies and eighties, but some of those old dears could give you a run for your money [laughs]. And there were some of them had dreadful, wicked sense of humours. They really, really did, absolutely marvellous, they really did.

At first she had meals on wheels and a carer coming four times a day, but soon she could look...

At first she had meals on wheels and a carer coming four times a day, but soon she could look...

View topic summary
SHOW TEXT VERSION
PRINT TRANSCRIPT
When I came home, I was again released with a support network. I had a carer, came in four times a day. Initially, they came in to get me up again, lunchtime, again in the afternoon, and then in the evening to put me to bed. And I had to have 'meals on wheels'. But what I didn't realise was that a lot of people suffer from post-traumatic stress disorder, when they've been in Intensive Care and they tend to push themselves too hard because they don't think that they're achieving anything. And so of course guess who has to get it - me!

So by the time, I mean, for the first two or three days, we got rid of the carer coming in the afternoon, and they came, they used to get me up. But after two, three mornings, they found I'd got myself up because I couldn't lay there waiting for them, all morning. Although they used to come by nine o'clock, you know, that was half the day gone, as far as I was concerned [laughs] because as soon as I woke up, I had to be out and about, you know.