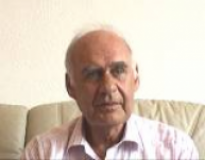 Age at interview: 67
Brief Outline: Admitted to ICU in 1979 after heart attack. Had another heart attack in 1992 and was admitted to ICU. In 1994, had heart transplant operation and went into ICU after surgery. Back on the ward, developed septicaemia. Had another operation and then went into ICU. Developed pneumonia and spent 8 weeks in ICU. Spent 3 weeks on ward.
Background: Occupation: retired fire fighter. Marital status: married. Number of children: 1. Ethnic background: White British.

He was surprised when he first came round at how big and uncomfortable the breathing tube was,...

He was surprised when he first came round at how big and uncomfortable the breathing tube was,...

View topic summary
SHOW TEXT VERSION
PRINT TRANSCRIPT
I was gradually deteriorating. That's why I was referred for a heart transplant to the Scottish transplant unit in [city], and they said that I had too many problems and they would not attempt it. But my consultant at the [hospital] in [city] said that he would try [another city] for me. So he tried [city] and I went to [city]. I was there for four days for assessment and they said, "We're quite happy to go ahead and do the operation, but the decision has to be yours." You have a meeting with surgeons, nurses, Intensive Care nurses, social workers, physios, you know, the whole team who operate around the transplant. And each of them tells you what their part of the thing is. And they explain fully everything that's going to happen, and then you have the decision whether to go ahead or not.

And the doctors talked about the risks and the benefits, and then the choice was yours?

So you then went for the operation?

And when you came to you were in Intensive Care?

So you knew you would have a ventilator?

But was it still quite a shock I suppose to have the tube?

Yes. I hadn't realised it would be so big. It's really quite a thick tube.

And you come to and the big thing that I did not like about that was waking up with this great tube down my throat, you know. It was really most uncomfortable. My first instinct was to sort of panic a bit, you know, because you feel, you know, "How can I breathe with this thing?" you know. And of course the thing is there actually to help you to breathe. You have to sort of exercise a bit of self-discipline and try to discipline yourself to actually work along with the thing and breathe, but it's most uncomfortable.

He had expected to feel groggy after coming round but looked and felt much better than before the...

He had expected to feel groggy after coming round but looked and felt much better than before the...

View topic summary
SHOW TEXT VERSION
PRINT TRANSCRIPT
So you woke up with the tube in your mouth. Was there any family there at the time or...?

My wife was there, yes.

How were you feeling then, when you came round and then for the next, how long were you there in Intensive Care?

So you felt much better straight away?

And the first time my wife saw me after the operation, she couldn't believe it, she said, "Oh" she said, "Your lips are not blue any more."

So you felt better, looked better?