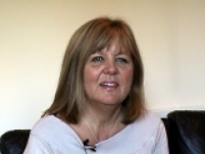 Age at interview: 53
Brief Outline: His husband was admitted to ICU before and after a kidney pancreas transplant. She spent three weeks travelling to the hospital as well as working.
Background: Secretary, married with four children. Ethnic background/nationality: White British.

In 2006 her husband, aged 57, was admitted to ICU before having a kidney pancreas transplant. They visited the ICU beforehand and were given all the information they needed about the surgery. After surgery her husband spent 1 day in ICU and was then transferred to a ward. Complications meant he had to have more surgery and was re-admitted to ICU. In total he had four operations and the pancreas was finally removed. He spent 6 weeks in hospital, one week of which was in ICU.

She visited her husband in hospital every day, after working for a few hours every morning. She also went to the hospital chapel everyday and had a lot of support from her friends and neighbours. Her husband's health has improved vastly since his surgery. He is now more active than before and has returned to work.

She and her husband were really pleased when doctors told them he was eligible for a transplant...

Show in context
SHOW TEXT VERSION
PRINT TRANSCRIPT
Well my husband has had diabetes since he was three or four years old. As a child, in those days it wasn't particularly well regulated, as it is now. And his health was deteriorated. By 40 his kidney problems had just about started and his health was deteriorating. By the time he was about 54, which is about three years ago, his kidneys were suffering greatly. He was on a lot of medication and he was considering kidney transplant list. Perhaps three years ago. He went to his local hospital and there was more discussion about kidney and pancreas, which was pioneering three years ago. Quite unheard of operations, but my husband was very, very keen.

He was very fortunate to have a doctor who was also very keen, pioneering doctor and he started looking into it, looking in all the websites, reading as much as he could. Most of the documentation at the time was actually from the States. But then it became obvious that this sort of operation was beginning to be done in England. And he went onto kidney dialysis about two and a half years ago and he had home APD which meant that he was on a dialysis machine, overnight, every night, seven nights a week, without fail. And also one dialysis in the day time at work, if he had the time to fit it in, he obviously benefited from fitting it in. He had to limit his fluids, which was very difficult because he had diabetes, which also makes you want to drink more.

He became very depressed and our lives were really being lived around the dialysis machine, although at all times we had enormous support and back up from all our doctors, wonderful back up. We were able to have holidays and we always took the dialysis machine with us. We actually went on a cruise to the Caribbean and the dialysis fluid was all delivered to the ship, which was wonderful. We had a good time, but he still had to be on dialysis on the boat.

In January of this year he spoke to his doctor, who said that he could be put forward at last for a kidney and pancreas transplant. He had been told before that he wouldn't be able to have the two, because he was overweight and beyond the age where they actually believed it worked very well. But things have changed and he saw his doctor this year. I believe, it was in January, and he said he could go on the kidney and pancreas transplant list and he went onto the list, I think probably March, April. February, March, April of this year. And we got a call on May 15th and he was called forward and he was tested, he was fine for the transplants.

Did you know what to expect or was it still a shock to see him in Intensive Care?

No. We were shown the Intensive Care ward before the operation, so we knew what to expect. And it is exactly as you would expect. It was spotlessly clean, full of absolute high tech machinery, computers, everything was computerised, lots of bleeping and one to one nursing, who sits within feet of you all the time. And it is exactly what it says it is going to be, which it is very good.

So you were shown round the Intensive Care?

And you knew which bed he would be in, or'?

Which bed he would be in for the first operation.

At each stage of her husband's time in hospital she found herself fearful of the risks associated...

Well at first I wanted him to live through the anaesthetic. Once he had lived through the anaesthetic I wanted the pain initially to be controlled and wanted him to feel comfortable. He did have four subsequent operations and after each and every operation I feared that, 'Was the pancreas going to be removed, would the pancreatitis get worse?' He did spike some infections and the first one he got when he had a blood transfusion. So I got paranoid about blood transfusions. And asked if they, does he really need a blood transfusion. And then I became more concerned with actually who did the treatment, because if I watched some people do it and I became concerned with exactly how they did it. I just reacted to everything as it happened. And I became paranoid myself, you know, like about blood transfusions, about cleanliness and about - not that I had any need to. I had no need to. It was just my fear then that the blood that was meant to be making him better was actually giving him an infection and just reacted to everything as it happened.

Before her husband's kidney transplant, she read lots of information about the operation and she...

Show in context
SHOW TEXT VERSION
PRINT TRANSCRIPT
We have got lots and lots of information. And we read it all. We read everything that we could read and the anaesthetist was just wonderful. They ask every single question and the risk of anaesthetic is not, anything like now like I would have considered it to have been. So we just sat and hoped that it went well. But we did sit and sort of say a prayer and shed a tear for the person who had made the, donated, and the family that had donated the organ. That very much goes through your mind. And we just hoped for the best. And the nursing staff were very good. We were given our own nurse, who came with us to the hospital where we were transferred from one hospital to another to have the operation and we had one nurse with us who went through everything with us.

Did you feel that there were any questions that weren't answered?

No we asked every question we could think of. And everything was explained.

She kept a diary for twenty years and wrote especially during times of stress, but her husband...

Show in context
SHOW TEXT VERSION
PRINT TRANSCRIPT
I have kept a diary for about twenty years. I write everything in the diary and I have done, I have done a book of everything, you know all' every single thing. I have got all his notes beforehand, notes afterwards, all the literature that we were given in the hospital. As you can see, we have got plenty of information. I kept every Get Well Soon card. And I have kept all his stickers and I wrote when I was in the hospital, I wrote exactly what I felt down. And I have read it since. My husband has not read it.

Is this a personal diary that you have been keeping for twenty years?

And during the time in the hospital you kept that up, by writing everything that was going on. Medically as well your emotions?

Yes and for me writing things down is, helps me so'

And you did that every day?

No I just write dentist, hairdressers. But in times of extreme stress I tend to write things down. And when you are sitting in Intensive Care you find you have read the same Hello magazine. And read everything can you read. And I couldn't concentrate on books, so I would just write things down and talk to him and play music. Which they did, they brought radios or CDs so you could take your own music in to help calm and keep the calm atmosphere.


Her neighbours gave her lifts to the hospital and took it in turns to cook for her so she'd have...

Show in context
SHOW TEXT VERSION
PRINT TRANSCRIPT
I don't think I could have had more support. I think that we are fairly self supporting as well. We are both strong people. I live in a community where the ladies and the men have been absolutely wonderful. When I got to rock bottom and I felt, 'Oh my God, I have come back at midnight on a Friday', a neighbour would take me on a Saturday and another one would come and pick me up.

And drop you off at the hospital?

Drop me at the hospital. Which was a three hour journey for them. And someone else would come and get me or perhaps take me for dinner. The girls were there every single night. And a different lady would put a dinner in my fridge for me so that when I got home at midnight there was something ready to eat. Whether it was a cold platter or whatever. Sometimes they left me a glass of wine. And a note. I got emails every day from friends when I was working, text messages. My family have been very supportive. My daughters especially and when I felt that I needed help then someone was in to help. I didn't have to rely on any outside help from the hospital, although the hospital did give me everything that I needed. No one ever refused to let us in or' they turned my husband, shaved him, and cared for him very well. Even when it didn't look like it was necessary to do that. He was very well looked after.

After his surgery, her husband is stronger and healthier than he was several years ago and it has...

Show in context
SHOW TEXT VERSION
PRINT TRANSCRIPT
He has been back now three months. Very good. Back to work within a month. But I must say he doesn't do a strenuous job. It is a clerical job and he loves his work. And he is not a man to do things around the home so he doesn't really want to be at home. He is much better, much more fit then when he went into hospital and we have taken our life a lot more seriously. We have made sure that we've eaten the best food which has been cooked, because at first you are not allowed to eat out when you are on immuno suppressants. And you have had an operation like this, we had to eat at home and eat the best food. We made the most of our food. He is now able to drink as much fluid as he wants to drink and the quality of our life has been much, much better.

And we don't have to have separate rooms. There is no dialysis machine and we are able to do things more normally now. And we are planning a holiday, a short haul holiday soon and in six months time my husband, will be able to take long haul flights and will be able to travel further.