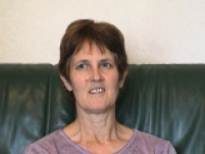 Age at interview: 54
Brief Outline: Her daughter was admitted to a ward and her son-in-law to ICU after they had a car accident. She stayed in their home so she could visit.
Background: Hospital doctor, married with three adult children. Ethnic background/nationality: White British.

In 2006 her daughter was admitted to a ward and her son-in-law to ICU after they had a car accident. Her son-in-law had head, neck, chest and arm injuries, then developed septicaemia. Her daughter had a broken leg and broken bones on both feet.

She lived some distance away from them and so spent 3 weeks living in their home so she could visit them in hospital. She also spent a few days at their home when her daughter was discharged. When her daughter was on a ward and her son-in-law in ICU, her daughter relied on family for information about her husband. She felt communication between ICU staff and ward staff could have been improved.

While her daughter was in hospital, her days were usually spent at the hospital and her evenings making phone calls to update other family members. At the time of interview her daughter had been discharged from hospital and her son-in-law was on a ward. She had returned to work and was visiting them at the weekends. Her main concerns were about how they would manage at home when neither of them were very mobile.

Focus on the patient and the moment in hand because things can change very quickly.

Focus on the patient and the moment in hand because things can change very quickly.

View topic summary
SHOW TEXT VERSION
PRINT TRANSCRIPT
I think we were living day-to-day rather than making long-term plans. And I would certainly advise anybody to do that. Because we never knew what was going to happen over more than a couple of days, hence really we didn't know how fast either my daughter or my son-in-law were going to improve. When my son-in-law was really ill we didn't know what was going to happen and you just couldn't think about the future. You were just concerned with the present. And I suppose, and just to forget about other things really for the time being. Other things are much less important, they were happening and could wait.

Her daughter's and son-in-law's house was exactly as they'd left it the day they had a car...

Her daughter's and son-in-law's house was exactly as they'd left it the day they had a car...

View topic summary
SHOW TEXT VERSION
PRINT TRANSCRIPT
We stayed at their home, which was difficult in some ways because we went back. It was the middle of the night and of course it was just as they'd left it earlier in the evening. There was washing on the line and other things. A pile of washing that needed sorting out and it reminded me actually of when my mother died suddenly several years ago. And everything that she'd been doing, all the clothes, everything was left just as it had been. And then somebody else had to tidy things away and sort things out. Yeah. And then we slept in their bed which was, didn't seem right somehow. And it took several days to get used to living in their home like that, you know. There were birthday cards up and wedding anniversary cards 'cause it had been my son-in-law's birthday a few days and their wedding anniversary a few days before it happened. So yes that added to the trauma of it.

And during those first few days and you staying at their house, what was your day-to-day routine during that time?

It was a strange existence. My husband came home, so I was on my own. Visiting started at 11 o'clock in the morning and I was there soon after that, 11, half past 11. And stayed until sort of early evening.

Yes, yeah. I stayed with my daughter on the ward, except that I did visit my son-in-law in Intensive Care and brought a report back to her. And when she improved and was more mobile I actually took her down.

Was she able to walk or did she have a wheelchair?

No, wheelchair. Yes. I was almost living at the hospital. I ate at the hospital and then when I got back to their house I spent a lot of time on the telephone, informing people, giving progress reports about the two of them. Yeah

To family mainly or?

Family, mainly family. I spoke to my husband and other family members, yes.

Did you find it quite tiring being at the hospital all day and then coming back to make these phone calls or did you find it, you needed to talk to other people by that stage? How did you find that?

It was tiring. Yes, even though I wasn't doing a lot but just the emotion. It was emotionally draining. I made sure I got some fresh air and exercise. I actually walked to the hospital and back.

And how long was that?

It was half an hour walk each way. Yeah. And then, but then yes I was always very tired in the evening and didn't sleep very well because of all the concerns, worries.

Her son-in-law was extremely confused when he came round, had a poor memory for quite a while...

Her son-in-law was extremely confused when he came round, had a poor memory for quite a while...

View topic summary
SHOW TEXT VERSION
PRINT TRANSCRIPT
They told us that he would be confused initially because of the sedation earlier on. And he did improve but he was still confused even when all the sedation, the drugs were out of his body.

So that was worrying because he was still confused even though the sedative drugs had worn off. And my daughter was definitely worried that he was going to be permanently impaired but he has improved. And now I think, except I think you'd have to do special testing to find, you know, any deficits, any problems now.

So he's almost back to normal?

Obviously he won't have remembered the accident but, but his memory generally, short - ?

I think so yes. His short term memory was poor in the first couple of weeks. Even a week ago he couldn't remember what he'd had for lunch. He couldn't remember whether he'd had physio that day but all that has, over the last couple of weeks, has gradually improved. And now he's virtually normal but they have said you know that he could continue to improve over several months.

At the beginning she felt her life revolved around the hospital and found it comforting talking...

At the beginning she felt her life revolved around the hospital and found it comforting talking...

View topic summary
SHOW TEXT VERSION
PRINT TRANSCRIPT
Did you feel you had all the support you needed at that time, you personally, or could there have been more support either outside the hospital or within the hospital in any way?

No, I don't think I needed to. As long as I could talk to people in the evening on the telephone, especially my husband when I got home and my sister. And told people what was happening. I did need to do that, yes. And that did help, yes. But that, I think other than that, I don't think any other support would have helped. People did offer practical things when I was there, with meals, but I was adequate. I ate at the hospital [laughs] I didn't really need any other help.