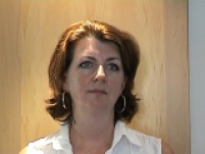 Age at interview: 41
Brief Outline: In 2006 her partner was diagnosed with Weil's disease, a rare bacterial infection. She stayed at the hospital for five nights and then in a nearby hotel.
Background: Bookkeeper, engaged, no children. Ethnic background/nationality: White British.

In 2006 her partner went to Borneo, where he did some work as a doctor. Four days after returning to the UK he felt tired and had flu-like symptoms. He was later diagnosed with Weil's disease, a rare bacterial infection, and spent thirteen days in ICU, two days in a coronary care unit and about five days on a general ward.

As the hospital was some distance from her home, she stayed in the relatives' room for five nights and then in a nearby hotel. She felt that, at first, the doctors didn't think her partner had anything serious and that they might have diagnosed him sooner if they had. She got information about Weil's disease and her partner's treatments from doctors, nurses, by reading her partner's medical books and talking with friends who were health professionals.

While her partner was in hospital, her life revolved around the hospital and his progress. She recalled occasions when relatives waited outside the ICU, sometimes for long periods of time, before they were allowed in because nurses were busy or had forgotten that the visitors were waiting. She praised the support she received from ICU nurses and from friends. At the time of interview, her partner was recovering very well and they had got engaged.


She found waiting to be let into ICU stressful, especially when her partner was first admitted,...

She found waiting to be let into ICU stressful, especially when her partner was first admitted,...

The only other criticism is the way they let you into the ward [ICU], I completely understand that you can't go in just when' they let you in whatever time. But because you have to ring a bell and wait for somebody to answer, I know they don't answer because they're doing something else, once you'd been in, you understand why. But that first visit, you're left in the hall, having rung the bell and not knowing what to do, not knowing what's happening, and I think if they had always somebody on reception, you know, that understood how people were feeling.

As soon as you get in it's fine but it's just the getting in.

And did you have to wait for a while?

Yes. And then you have to wait because I got there at change of shift. And, you know, you're beside yourself at that point, because you don't know what's happened. You don't know if they're dead or alive. When they do come and see you, they take you into a side room and they explain everything really clearly, with a nurse and a doctor and that's amazing as well. And then they explain to you that you're going to get a shock when you see them. You know that they're going to say that but you still get a shock. And then you don't know what to do because you haven't got used to it. And you don't know the routine and you're worried that you're going to upset the nurses and the doctors. Strangely that's how you feel, that you might be in the way or you might tread on a pipe or something.

And then when you come back in again, sometimes some of the nurses forget you. So you ring the doorbell again, back to this access thing. I wasn't because I would walk in after a while and I'd think, 'Well I'm just going to walk in and ask somebody.' But I know my partner's parents who aren't quite so forward were sometimes sitting in that little waiting room for about two hours because people had forgotten they were there and they didn't want to bother anybody. And of course they think something's wrong.

Accept support so you can remain strong and provide personal information about the patient.

Accept support so you can remain strong and provide personal information about the patient.

I would get somebody who can sort your normal out for you, your domestic life out for you, someone that you trust. Realise that you can't do it, that you can't cope, you can't look after your house, your garden, your children, your washing. You just can't do it. And if you're a very independent person you need to not be. And you need to be completely selfish. You have to say, 'No, I don't want you to come,' or, 'I do want you to come,' and you don't worry about somebody taking time off work or whether they've got to give you a lift, you just, you've got to keep yourself going, for the nurses as well as for the patient, because they've had to find out about him through you and if you're just going to be useless, I don't think it's very helpful for anybody [laughs].

She tried not to think about what might happen in the future though, when it all became too much,...

She tried not to think about what might happen in the future though, when it all became too much,...

I asked them if it was life threatening, which is the first thing you actually want to know because when they're building up to telling you whether it is or it isn't, you're not listening to that. First of all you want to know. And they're completely honest and they said, 'Yes, it's life-threatening and you need to call his parents.' And so then you think, 'Oh okay'. And then you want to say, 'Well, when won't it be like life-threatening and' you know, they said, 'The next forty eight hours is critical'. But actually the whole time you're in ITU, it's critical because they're unconscious the whole time and he was there was thirteen days. But you get used to that And then you don't ask anymore.

And they explain to you that you have to do it' well I decided you have to do it day by day. You can't ever ask what the future might be because you can't cope with it. And I think if you can grab that and they do try to explain it to you. And they're quite pessimistic which' because I think they think people otherwise just ignore it and they don't get it. But if you can stop thinking right well this is a' you know, it's fine you can do it. It's just your new way of life and that's how it has to be. It's the only way you can get through it.

You think that you're on your own, you know, you're wandering around phoning everybody for the first time. You think, 'I am completely on my own.' And then people start to arrive and it's not so bad. I had other difficult circumstances to deal with which other people wouldn't have. So there are all sorts of extra stress going on. But I didn't think beyond the day. And the days that I did, I did have a couple of times when I was upset when I was in the ward, with him, then I would leave in case he could hear. And one night, the nurses I think probably spent longer with me than they did with him. And they were fantastic. And you stop feeling embarrassed about looking awful and crying in public really [laughs]. It just isn't an issue. You're frightened. You're absolutely terrified that they're not going to live, that's really your thought, you know, if you let yourself think it.

She grew closer to her partner and his illness made them both more aware of what was important to...

She grew closer to her partner and his illness made them both more aware of what was important to...

When he first got to ITU he was conscious, how scared he must have been because he knew how ill he was and what they were about to do. And he had a massive lung bleed, which he doesn't remember, but he might've at that point been thinking. 'Well where is she?' Very worried about the parent thing. And he did manage to say to the doctors, either I had to be next of kin and he made them realise how important that was and he told them that his parents didn't know. So they were fantastic about that. Because it's another thing for them to have to deal with, the staff.

Oh yes. It was just awful.

Yes. So you were the next of kin?

And how did you deal with the parents and everything?

It must have been a shock for them because it happened so, so suddenly?

Yeah. Yeah, they had all that to take in as well. But we didn't actually tell his parents until he woke up.

A lot of people do say that it makes them look at life differently' have you made' you mentioned work, have you made any other changes to life or your attitudes towards life, have they changed or'?

Yes. Well he told his parents about our relationship. We've been together for ten years and they didn't know. And he's proposed and so we're going to get married. And we're having a wedding for his parents and then one for us. So it has' and I mean especially for [my partner] , who's now not living a lie to his parents, I think that helped his recovery enormously because you realise what's important'you know. And you want to shout at everybody else for not realising what's important [laughs]. I hope it lasts. I hope we don't go back to just you know, forgetting about it.