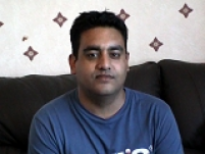 Age at interview: 28
Brief Outline: In May 2006 his father was admitted to ICU because of pneumonia and was still in hospital at the time of interview.
Background: Accounts assistant, single, no children. Ethnic background/nationality: British Asian.

In May 2006 his father was admitted to hospital for some bowel surgery. He had breathing difficulties and was diagnosed with pneumonia. He was admitted to ICU for about a week and was in a general ward at the time of interview, where he'd been staying for the past three months.

Although he did not know when his father would be discharged from hospital, he felt he was in the best hands. He was happy with the care his father had received to date and felt that doctors and nurses had kept them very well informed about his father's progress. Later his father had MRSA and he wondered if that could have been avoided. He felt that he had all the support he needed because he came from a large and close family.

His father went to hospital with stomach pains but when he developed pneumonia he was transferred...

His father went to hospital with stomach pains but when he developed pneumonia he was transferred...

Well, it started, I mean he's had a history of stomach problems before. So he got some stomach pains and so we referred him to the doctor. And he referred us to the hospital. And then they had to operate on him because his bowels were blocked. So they did that. And because he had an operation before on the bowels, he's like had all this stuff inside his stomach. So they took, it was quite a big operation, it was about five hours, it was a five-hour operation. And from that he was struggling to breathe properly after the operation. So he got a bit of pneumonia on his lungs and stuff. So that's why he went into ICU. So just to make him breathe a bit better and hopefully to get rid of the pneumonia there as well.

So he went there literally probably a couple of days, maybe three days after the operation. And then they took him down, I think we got a phone call about 11 o'clock at night saying they were going to take him down [to ICU]. And so we just went down there. And they took him. He wasn't very alert, he was quite unconscious at that time. But after, I think they put him on some really heavy oxygen stuff, and after a while, I think even overnight or maybe later on that day, he was looking a bit better.

His father was likely to stay in hospital for quite some time and would only be discharged after...

His father was likely to stay in hospital for quite some time and would only be discharged after...

It's been quite a long time. And I mean to be fair they did say it might be a long time. So they did say that. But I didn't expect, to be honest, it to be this long. But however I mean on that ward there are people who've been in there for six, eight months. So maybe it's just one of those things that people do stay that long. But, yes, that was the main concern really, you know, 'How come he's not getting better?' But no, there are signs of him getting better. I mean they need to operate again on him, to open his bowels up again. But they said that that's not as big as the first one. So they're just going to wait until he gets a bit stronger for that.

So when he gets stronger, then - ?

Yes. Because that's quite important to do that. I mean they say it's only a little thing really.

And did they say anything about how long it could take to recover when he comes home?

I don't think we've got to that stage yet. I think that's a sign of it being a long way away.

We don't know. Probably I don't expect it to be within the next month. But we'll see after that. I think, I can't really say.

Because in this time he'll also has to get stronger and then have another operation?

- recover again, and then come back.