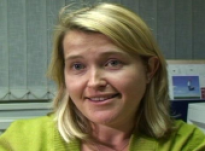 Age at interview: 35
Age at diagnosis: 31
Brief Outline: After her first son was born, Christine suffered multiple miscarriages. She finally had her second son, and was pregnant for the third time.
Background: Christine is a GP, married with 2 children. She was pregnant with her third child. Ethnic background' White Caucasian.

Christine had one miscarriage before successfully having her first son. But when she and her husband started to try for a second child, she went on to have seven miscarriages in a two-year period. It was not until after her fourth miscarriage that she sought medical help, and was ultimately referred to a Recurrent Miscarriage Unit. Although she was able to get pregnant easily, she felt her fertility was seriously compromised by not being able to keep the pregnancies. Christine viewed them as failing pregnancies. She found the miscarriages very distressing and had psychotherapy for two years. When she was finally referred to the Recurrent Miscarriage Unit, they suggested progesterone pessaries and Christine’s second son was born. At the time of the interview she was sixteen weeks pregnant with her third child.

Like most women of her generation, Christine had spent so many years being fearful of getting pregnant, she expected to get pregnant immediately after she stopped taking contraception.

Like most women of her generation, Christine had spent so many years being fearful of getting pregnant, she expected to get pregnant immediately after she stopped taking contraception.

So I guess like most ladies of our age, for most of my teenage life my biggest fear was getting pregnant, so obviously, you know, contraception was really important. So when, I got married in 1998 and immediately stopped contraception and expected the inevitable to happen, as I expect lots of people do. And it didn’t.

Christine felt that her relationship with her husband was weakened. When she was upset her...

Christine felt that her relationship with her husband was weakened. When she was upset her...

View topic summary
SHOW TEXT VERSION
EMBED CODE
PRINT TRANSCRIPT
So how did it affect your relationship?
Well it weakened it, definitely weakened it. Which is I think one of the reasons I had to have the therapy. Because I felt, whilst I felt it was my fault that it was all happening. That I was failing. I also blamed him for not being able to support me, how I thought I needed to be supported. I felt he was weak, and that he wasn’t able to make it better. Completely, all obviously completely unrealistic expectations but that is the whole problem when you are in it. I wanted him to fix it. I wanted him to make it better. And I know he wanted to make it better, but he couldn’t. And being a man he didn’t know how to handle me either when I was slightly, you know, hysterical, you know, and if I bit his head off for something, rather than giving me a hug and saying, “I know this is really hard for you at the moment.” “You know let it out, scream if you if you need to.” Which is what my girlfriends used to do. He would just wratch it up and saying, “Why are you shouting at me?” you know, as men do, bless them. And I think I needed to understand that it is not because he didn’t love me. It is just that men don’t think the same way that we do and they don’t react to the non verbal messages. I shouldn’t say all men. Because I am sure some men do brilliantly at this. But my husband, didn’t react to the non verbal messages, the same way as girls do, interestingly.
Previous Page
Next Page