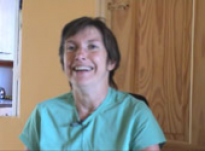 Brief Outline: For DTaP/IPV/Hib' Followed recommendations of health professionals. For MMR' Talked to her GP and to her hospital consultant. Read information in newspapers and on the Internet. Talked to friends and investigated single vaccines. A friend in the USA helped her to make a final decision.
Background: At time of interview' married, one son, aged 2.5 years. Parent's occupation' Mother- Teacher, Father- University Lecturer. Ethnic background' White-British.

Decided it was a safer gamble to give her son the MMR vaccine than to not have him immunised.

Decided it was a safer gamble to give her son the MMR vaccine than to not have him immunised.

View topic summary
SHOW TEXT VERSION
PRINT TRANSCRIPT
It's really difficult, really difficult. And our son was quite, I don't want to say normal, but, you know, you look at sort of their landmarks that they're supposed to reach at certain ages and he hit those quite easily. And by the end of the research and the agonising then we took a gamble, because there is a risk attached to the triple vaccine. But just like there's a risk attached to the immunisations I gave him at 3 months. But it seemed to be easier to give him the injection than not to give him it. And we were, I don't know, I can't even say we were prepared to take the consequences. It felt a safer gamble than it did at the start. And now, having given the triple vaccine, he goes to nursery and he'll start school in a couple of years. And it seems like the right decision.

Talking to a friend in America helped her to make a final decision.

Talking to a friend in America helped her to make a final decision.

View topic summary
SHOW TEXT VERSION
PRINT TRANSCRIPT
So, I talked to my GP, who I've always trusted implicitly. We have a very good relationship. And she said that the MMR was, was safe as far as she knew, and gave me some anecdotal evidence. And that was the first time I thought, 'But you work for the NHS. I bet that's not true what you've told me'. Which now, a year after he had the MMR, it's quite a bizarre thought to think that I would have thought that about my GP. But then I moved on from her to my consultant, who I see about my condition, and I just happened to drop in that we were thinking of giving our son the MMR, and what did he think? And he was actually very, very full in his opinion and said, 'I think it's worse if you don't give him the MMR than if you do. I think the risks are greater'. I came out from seeing him, and had the same feeling of, 'Yes, but you work for the NHS'. Which even now I can't really believe that I thought. But because potentially I was going to damage my son, then I didn't trust anybody really. So from, from that information then I read things in the paper, which I read and then felt completely unsatisfied after I'd read, because I didn't feel any wiser really. So then I went on to the Web, and that was equally opposing views, and I was left thinking, 'Well, I've got to make the decision myself'.

And I talked to friends, who said that if their child had been a girl, then, yes, they would have immunised. But because all three of my friends had boys, then they said, no, they weren't, they were going to go for the individual jabs. So I then spent time looking for clinics who would immunise, and I found one that seemed a possibility. The cost was phenomenal. I think it was about '150 per injection. And then it, because of the time we wanted to have it done, then there was a, a shortage of the mumps vaccine, so we wouldn't be able to have that anyhow. So it seemed, you know, when I found that out, then for a few weeks we toyed with the idea that it would probably be best to give him the individual vaccinations.

But also, amongst my group of friends then I seemed to be the only person who was vaguely concerned about the injection and not having it on time. So my friends were saying, 'Oh, yes, we, yes, we really must look into that'. And I was thinking, 'But if I delay it any longer maybe he's going to get the infections anyhow'. So I felt there was a bit more, I needed to be a bit quicker really in making my decision.

So I think I then phoned a friend in the States to say, 'Well, look, we're thinking about getting these injections done individually'. And she said, 'Right, yes, there has been quite a lot of, lot of stuff about that in the press in England'. She said, 'I only know that if I hadn't given my child the immunisation, then she wouldn't have been allowed to go to school in the States'. And I don't know why that piece of information just switched me into thinking, 'Okay, we'll go for it'. But we decided at that point that we'd go for the MMR. I think probably what she said combined with my dissatisfaction in having the individual jabs done privately, then I think that's probably what switched my decision.

She didn't take any notice of government literature on immunisation because she felt it was biased.

She didn't take any notice of government literature on immunisation because she felt it was biased.

View topic summary
SHOW TEXT VERSION
PRINT TRANSCRIPT
And I remember it wasn't publicised whether the Prime Minister's son had had the MMR or whether he'd had them individually. And I remember thinking, 'I'd have found that really helpful, had I known what you had'. But for me that was all part of the conspiracy, that, 'I bet he had individual ones, because they know it's potentially dangerous'. So, yes, it all felt a huge conspiracy.

And we got glossy things from the NHS. I think I maybe got it in a magazine, a CD. And on the CD was a black and white photo of a baby and its parent, and it was all very moody and beautiful. And, 'I'm not even going to listen to it. I don't even want to know'.

Because I thought, 'Well, you'll just give me the same old information about how the triple vaccine is perfectly healthy'.

They were concerned that their child might be disabled in some way from MMR, which they didn't...

They were concerned that their child might be disabled in some way from MMR, which they didn't...

View topic summary
SHOW TEXT VERSION
PRINT TRANSCRIPT
When I was pregnant, then we had lots of tests to ensure that I, the baby wasn't going to be disabled. Because, however awful that sounds, then we both knew that if we were going to have a baby, which we very much wanted, then we had to make sure that he was going to be okay. Because we knew it would put too much pressure on ourselves, but also he wouldn't perhaps have his needs met as fully as he might otherwise have. So when he was born and things were fine, then we knew that he was going to have to have an MMR. And we knew that there was a, a risk attached to MMR. And all we knew was what we'd heard in the media. But we also knew that the NHS were mounting quite a vigorous campaign to say that it was a perfectly safe injection. And yet there was an equally vociferous group of parents who were saying, 'Look, it really isn't'. So because of the decision that we had taken during my pregnancy we didn't want to give him anything that would potentially make him disabled. I know other parents take that decision with not, not perhaps the same amount of gravity, but we specifically had that in mind.

View topic summary
SHOW TEXT VERSION
PRINT TRANSCRIPT
So I then spent time looking for clinics who would immunise, and I found one that seemed a possibility. The cost was phenomenal. I think it was about '150 per injection. And then it, because of the time we wanted to have it done, then there was a shortage of the mumps vaccine, so we wouldn't be able to have that anyhow. So it seemed, you know, when I found that out, then for a few weeks we toyed with the idea that it would probably be best to give him the individual vaccinations.

But, to be honest, going to a clinic seemed a bit seedy in the end. You know, it seemed to be like putting these things into my child and, and we had to go through the back door to get it. And it, I didn't feel like I wanted to do that. So I suppose the chat to the friend in America was, kind of was my green light. We were moving more towards the MMR because the clinics were so difficult to, not just to access, but then it was no problem to pay the money, but it just seemed like a ludicrous amount of money for individual injections. And they seemed to be cashing in on my concerns.

Having been very worried while making their decision, her son's MMR vaccine had been a bit of a...

Having been very worried while making their decision, her son's MMR vaccine had been a bit of a...

View topic summary
SHOW TEXT VERSION
PRINT TRANSCRIPT
So when he'd had the injection, then, I think he gave a bit of a shout when the needle went in, and then he got some kind of whistle toy from the nurse because he'd been so brave. And then we came home, and I remember keeping looking back in the car to see if he was okay. And we got back here, so it's about twenty minutes from the surgery, and we both said, 'Oh, he seems to be all right. He seems to be quite normal'. And obviously for the next 24 hours then we were looking out for signs of unusual behaviour. But there were none.

And did he have any swelling or anything, any reaction at all?

No, I think, I don't even think we gave him Calpol. So it was a bit of a non-event.