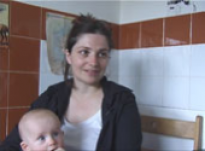 Brief Outline: For DTaP/IPV/Hib' Spoke to friends in the UK and Germany who were medically qualified. Experience of immunisation for her oldest daughter in Germany by anthroposophical doctors influenced her decision. She felt there was little opportunity to discuss immunisations with her own GP and health visitor.
Background: At time of interview' cohabiting, two children, aged 10 years (daughter) and 3 months (daughter). Parent's occupation' Mother- Research Consultant. Father- Art Director (Film). Ethnic background' White-European. (Hungary).

Don't assume that at the six week check, parents will be having the immunisation.

Show in context
SHOW TEXT VERSION
PRINT TRANSCRIPT
And again I find it extremely inappropriate that they make the appointment so that the assumption is you will have the immunisations without ever having seen a doctor. You know, you've only had your baby for six weeks, it's all very new. Nobody, you don't receive any support at all. I'm involved in the maternity services here, and so there is very, very little support, let's say no support for new mums. Midwives are completely overworked. There's not enough health visitors. And then the health visitor, when she did come was completely overwhelmed with paperwork, so I really didn't have the time to speak to her about anything. So if I wouldn't have had any friends in the medical profession I wouldn't have had any information whatsoever, unless I sit down and read on the Internet, which I think is completely inappropriate because it's uncensored, well, it's unchecked.

Listen to your instincts as you are likely to be the best judge for your child.

Show in context
SHOW TEXT VERSION
PRINT TRANSCRIPT
To kind of listen to your instincts and if you think that your child is really ill or, then don't, make sure that people take you seriously. Because I feel that you as a parent are most likely to be the best judge of that'. Yes, so I think that's what I would, I would mainly say. And also I mean I would encourage people definitely to make sure  that their children get immunised of the things like polio and diphtheria which have an impact on the population, but also to make sure that  when they do get it that their children are really healthy  and sort of in good form and not at a time when they are stressed out anyway.

She believed that the immunisation schedule didn't take in to account children's individual needs.

Show in context
SHOW TEXT VERSION
PRINT TRANSCRIPT
With this little one here I found, here in Britain I found it a lot more difficult with the whole immunisation because it, I don't, I didn't feel that they were actually looking at the individual child. One of my, I had a lot of friends who, whose babies got immunized, well, I found very, very young, and also when I thought they weren't completely healthy. So they had a bit of fever or a bit of snotty nose or whatever, which my GP in Germany wouldn't have immunised at. And here the nurse said, 'Oh, that's not a problem at all' and, you know, didn't even ask whether she had a fever or didn't check her at all. And, and I, I think that that is my concern. I think immunisation is such, is obviously very good and very important and has, you know, made a huge impact on, on the health of, of the population and, and children's lives. But it just seems that it's not looked, being looked at the individual child. So really they often, the nurse, the nurses or the, I, well, here it's nurses, just kind of do it very routinely and don't check whether that child is completely healthy. And that is something that I find quite concerning. So with this little one, I, she had her first one just two weeks ago or so.