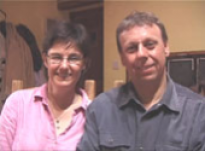 Brief Outline: For all immunisations' They used the Internet to search for research papers in medical journals, read books, talked to other parents about their decisions which were both pro and anti immunisation and talked to the midwife at their birth group and to their GP.
Background: At time of interview' married, two children, aged 6 years (daughter), 4 years (son). Parent's occupation' Mother- Environmental Consultant, Father- Farmer. Ethnic background' White-British.

Has a personal belief that immunisations might be preventing the immune system from working...

Has a personal belief that immunisations might be preventing the immune system from working...

View topic summary
SHOW TEXT VERSION
EMBED CODE
PRINT TRANSCRIPT
Father' You know you're meant to have a peck of dirt a day just to keep that immune system ticking over, and one of these things that they think about these allergies and increase of asthma and eczema and all the rest of it, there's either one theory is that the immune system is being overworked because it's being made sensitive by these vaccines or it's being under worked because of the vaccine. So we have an immune system, presumably if we look after it correctly it should work, and these vaccines could be the dampening down the effect or aggravating, neither are entirely, advantageous.

Reading books and talking to other parents and health professionals is more helpful because the...

Reading books and talking to other parents and health professionals is more helpful because the...

View topic summary
SHOW TEXT VERSION
EMBED CODE
PRINT TRANSCRIPT
Mother' Well it was quite difficult because if you're not careful you end up with reams and reams of paper and it just becomes too much to try and trawl your way through it which we did at one time. But we did actually put in a search code of immunisation and then reduce it down to things like MMR and got some useful papers. But I think more useful to us was talking to other parents who hadn't had their children immunised and the reasons being. Talking to medical advisors and just really reading books was certainly more useful than the Internet. But I think the Internet if you're more at ease with it can still be a useful tool, but if you're not careful you'll just end up being completely overcome with information.

Father' A lot of the information's from America isn't it?

Mother' Yeah, there's a lot of information from America and there's also several books that have been written in America because they actually have  more injections in America then we do in this country and so there's certainly the pros and cons as to whether to have your children immunised, there's lots of literature from America. But I think in the end it, if you're not careful you'll never make a decision because there's so much information and you have to sort of decide what you think is best and that's what parents have to do regarding everything really. And you have to weigh up the risk factor.

They are fairly convinced that they made the right decision not to immunise their children.

They are fairly convinced that they made the right decision not to immunise their children.

View topic summary
SHOW TEXT VERSION
EMBED CODE
PRINT TRANSCRIPT
Mother' And so you do have to question, and my belief is quite strongly that not every child is affected in a negative way from immunisation but there's certainly a type of child that will be. I am absolutely convinced that with my son he would be the type that would be affected by vaccination and it's purely because he has skin problems and maybe in later life he may get asthma, but I'm hoping having not had him vaccinated that he won't have any other severe reactions.

And now you feel that you made the right decision?

Father' Don't know. You'd like to think that you have but you can't pat yourself on the back because you don't know what's around the corner. All I know is that our children have illnesses and they get over them and they look healthy, they play well, they sleep well and our daughter who's six, is the youngest but one in her class and she's the tallest in the class. So I personally think her growth hasn't been inhibited by any foreign bodies and so on. Whether, because we're not excessively tall parents so where is she getting that from? Maybe she hasn't had that setback that the immune system's had throughout her life. That's what I think, I could be completely wrong, I don't know.

Mother' They are happy and healthy children and you never know whether you've made a right decision with regards to immunisation it, I don't know exactly what would have happened had I had the children immunised. I mean they could have been exactly how they are now we don't know for sure how they would have turned out anyway, but from our point of view certainly we're fairly convinced that it's been the right decision so far for our children.