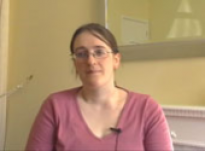 Brief Outline: For DTaP/IPV/Hib' Followed recommendations of health professionals. For MMR' Found it useful to talk to their health visitor, other parents who had already had their child immunised and to their extended family. Read information in parenting magazines, a parenting web site and newspaper articles.
Background: At time of interview' cohabiting, one son aged 14 months. Undergoing tests to establish whether he has a mild egg allergy. Parent's occupation' Mother- Arts Administrator, Father- Course Lecturer.

A comprehensive information pack needs to be sent with the appointment card.

Show in context
SHOW TEXT VERSION
PRINT TRANSCRIPT
Yes, actually I think, for, for things that have been controversial like the MMR, I think it would be worthwhile having something sent out to parents. I know these, there probably are leaflets that are available from practices and everything, but people don't always see them or don't always pick things up or whatever. It might be actually quite useful to get something sent with the appointment card, just to say, 'Here are some useful, you know, Internet links or, you know, reference points from the library or whatever that, that will help you make your decision' or even just a few facts saying possibly, if it's possible, I don't know, if it's government funded it might not be, but weighing up the pros and cons of, of it as, you know, as, as investigated in the past couple of years. I think that would help a lot of people, because as I say I think sometimes people just base things on, 'Oh, the newspaper said it was bad so therefore we won't do it'.

She was reassured when her health visitor told her that the symptoms of autism tend to appear...

Show in context
SHOW TEXT VERSION
PRINT TRANSCRIPT
I'm not too worried, I think there's so little to suggest that it's linked to the autism question that, that I just think I'll just go ahead and have my fingers crossed. I spoke to my health visitor about it extensively again and she's been really great for information. And she was saying as well, you know, with hindsight a lot of the parents that have reported autism following the MMR, with hindsight they have actually, there have been aspects of their child's behaviour before that, that could have pointed to it. And of course it's to do with the timing and, you know, the symptoms of autism appear just after, round about or round about the time that the MMR is given. It just seems to be a coincidence. So I think we, we've just decided to bite the bullet and have it done because then he'll be immunised against these diseases.

Possible reactions to the vaccine worried her but her son had been fine after all three sets of...

Show in context
SHOW TEXT VERSION
PRINT TRANSCRIPT
Well, when [my son] was born I was just sent the, the regular letters out that the local doctors, the health centre send. And I think at that stage I just accepted that that's what had to happen. I didn't, I hadn't heard about anything untoward about the tetanus, diphtheria and whooping cough jabs or the polio so we just went ahead with them. The only thing I was concerned about as a new mum was would there be a reaction, because obviously everything was absolutely new to me and I just didn't know, you know, well, no other previous chance to find out if he might be allergic to anything in the injections or anything like that. But actually he was absolutely fine after them. The first one he was fine, the second one he was slightly feverish, and the third one he was fine again, third set. So it was just a question of we got the letter and we turned up and we, we had him immunised.