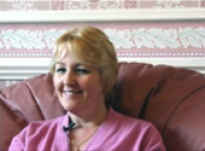 Brief Outline: For DTaP/IPV/Hib' Followed recommendations of health professionals. For MMR' Gathered information from the media and talked to other mums at playgroup and to their health visitor. Advice from their GP helped them to make a decision.
Background: At time of interview' married, one daughter, aged 5 years. Parent's occupation' Mother- Nursing Auxilary, Father- Plasterer. Ethnic background' White-British.

After much anxiety, the information their GP told them helped them to make up their minds about MMR.

Show in context
SHOW TEXT VERSION
PRINT TRANSCRIPT
Well, I talked to my own doctor, at length, and the health visitor. They of course were both, you know, sort of people you look up to and health professionals. And they couldn't stress enough how I wasn't to worry and how I should give [my daughter] the MMR because the downside was a lot worse. And if she didn't have the MMR, you know, the things that could happen to her, how dangerous measles can be, and like the German measles could affect her when she's older and goes to have children of her own, you know, the rubella side of it. And these health professionals, I'm trying not to say the names, they were sort of, they've got no reason to say otherwise. If they for one minute thought that there would be a problem with MMR it's more than their careers are worth to push me to give it to my little girl.

And in the end that's where I thought, 'Well' because my doctor who is a family friend and, as well, I just knew he wouldn't, he would not have staked his career on it. And, you know, I mean he just said, 'Come on, give her here, I'm going to do it now'. And he did it. And it was, and it was talking to them really and realising that they wouldn't say those things if they didn't truly believe them, you know.

Her daughter's health problems improved after she had MMR.

Show in context
SHOW TEXT VERSION
PRINT TRANSCRIPT
But anyway he gave it her and we were there for a few days, you know, we were sort of worrying and, and fretting. And really we've never looked back because we think, and obviously we don't know 100 per cent sure, but we think that it kick-started her immune system in because she just stopped having these constant infections and viruses and these illnesses. Even her bowel problem, problems seemed to improve. She was under the hospital and being treated for the bowel problems, so maybe it was a coincidence, we don't know. But all we can see was the improvement in her health in general from the day she had that, that MMR injection. And we didn't hesitate at all in her having the second one, which she had just before she went to school, we didn't hesitate on that one. She had it and she's been absolutely brilliant ever since.

She trusted her GP who was also a friend.

Show in context
SHOW TEXT VERSION
PRINT TRANSCRIPT
We had no problem with her having the other immunisations, the normal ones, but the MMR was quite an issue obviously, as it was for everybody. But even more so really because [our daughter] had had, she'd always had viruses and ear infections and then she started with bowel problems. And the decision was just a dreadful one to make for that. And then we decided eventually after much anguish, listened to what was on the television, what was being said, that we would take her to have measles only done, privately. So we went to a clinic in Liverpool, and by this time she was coming up to 2' and we hadn't had the first MMR done yet. So we took her to the clinic in Liverpool and when we got there they wouldn't do the measles injection because she'd had antibiotics the previous week for something else. And we didn't know that she couldn't have the measles injection. Anyway they sent us packing, sent us home.

And we went to see our own doctor who, but, you know, he, who persuaded us and staked his career on the fact that this MMR wouldn't harm our little girl. And he said he'd even give her the injection himself, just to prove how confident he was in it. And he hasn't given an injection to a child for a long time. Anyway he gave her, gave it to her there and then before we could change our minds or have time to think about it. And we were just, in just such a state. I couldn't tell you how worried we were.

And these health professionals, I'm trying not to say the names, they were sort of, they've got no reason to say otherwise. If they for one minute thought that there would be a problem with MMR it's more than their careers are worth to push me to give it to my little girl. And in the end that's where I thought, 'Well' because my doctor who is a family friend and, as well, I just knew he wouldn't, he would not have staked his career on it. And, you know, I mean he just said, 'Come on, give her here, I'm going to do it now'. And, and he did it. And it was, and it was talking to them really and realising that they wouldn't say those things if they didn't truly believe them, you know.

So you trusted your doctor?

Oh, yes, yes, I trust him with anything. And I hadn't actually spoken to him himself, we went over another issue with her. And it was, I thought, 'Oh, I should have spoken to him long since really' because he was that last bit of reassurance that we needed, you know. And it was a good thing, it was, you know, the best thing we did.

She was anxious that her daughter's bowel problems and weak immune system may get worse with MMR...

Show in context
SHOW TEXT VERSION
PRINT TRANSCRIPT
We were just, in just such a state. I couldn't tell you how worried we were. I think it's being older parents as well. And with her already having the bowel problems and being such a sickly little girl that, anyway it was done.

She'd be, sickness and diarrhoea, like viruses, anything that was, well, it didn't really have to be about, she would just get these infections. It's as if she was really, her immune system was really weak and we didn't know the reason behind it. In fact a couple of times when she was small, when she was a baby, she was hospitalised because of them.

But altogether she just seemed to be always poorly. And then when she was about 18 months she started becoming really constipated, badly. I mean she would go like 10 to 14 days and when she did finally go it was just murder, she would scream. It's just something I never want to see again. We had to use suppositories on her, and again she was under the hospital for that, under a specialist. And it was just terrible. So it was just those kind of things really, constant infections of her, of her, you know, her system, and tummy viruses, tummy bugs and things like that.

And at that age she was coming up to having the MMR?

Well, yes, because she was like 13 months and there was just no way we would consider, well, she was never really well enough to have it. It was just one thing after another, you know, she'd be, like I said I'd be at work and I'd be off all the time, and they were very good. But that's just the way she was.

And it worried me because of us, of us, being older, we thought maybe, because I was 40 when I had Ellie and I thought it, I, yes, I thought with me being 40 I might, it might be that that's made her so weak in, in her resistance to anything. But as I said, you know, as time went on and we were worrying about the MMR, and she was 2' when we finally did give, give it to her, or get, you know, allow her to have it done. But there'd been a lot of anguish before that, leading up to that. And it was unnecessary, looking back now, it was unnecessary.

It is important to consider the long-term implications of not immunising your children.

Show in context
SHOW TEXT VERSION
PRINT TRANSCRIPT
But I mean it's like the mumps. That's more for sort of I think little boys and that, and, and teenage men when they get it, it can cause problems. So you can't just look at yourself, you should look at, at future, what can happen in the future, you know. And German measles, if you have never had, or if you've not been vaccinated and you get, get it, or when you're pregnant, I believe, I don't know, but I believe it can harm the baby in the early stages of pregnancy. So it's not just a now thing, it's later, it's later on. And if she's vaccinated against all of those then as I said before she is, I've done my duty now, she's safe from those things. There's enough in the world that she can get, at least that's three less really.

Describes her five-year-old daughter as happy and healthy and not affected at all by her MMR...

Show in context
HIDE TEXT
PRINT TRANSCRIPT
She's happy, she's healthy, she's just lovely really. I've got no concerns about her at all. She's bright and intelligent. The teachers when, you know, you go and see them they've got nothing but nice things to say about her and her work. She's certainly not backward in coming forward. She's great and normal and, you know, she hasn't been affected at all, quite the opposite. She's better for it.

She's gone from a scrawny little child to a lovely podgy, you know, healthy happy one. So I would, I would just say to anybody to have it done, without doubt.