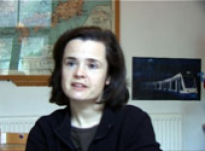 Making the decision about her son's MMR has been the hardest decision she has had to make as a...

Making the decision about her son's MMR has been the hardest decision she has had to make as a...

View topic summary
SHOW TEXT VERSION
EMBED CODE
PRINT TRANSCRIPT
I think this decision is the hardest decision I've had to make as a parent. I only have one son and I had him quite old. I was thirty-eight when he was born. I lived a lot of my life. I've worked and I'd always felt like I, yes, you know, most of the time I know what I am doing. I'm a teacher. I'm not, you know, I'm not a head of department or head of my subject or anything. I'm a jobbing teacher. I like my work. I'm fine thank you very much.

And you have a baby and you haven't got a clue what you are doing. You know, no one can tell you how your life will change. I'm sure every, every new parent's life changes in different ways. And you're constantly having to make decisions about everything' about what time to, to feed; what time to change a nappy; what, should I put him down to sleep; or he is crying should I pick him up and; should I give him the vaccination and, and, I think the first couple of vaccinations were fine because, you know, that's what's done and you've got so many decisions to make. And, and now because he's slightly older and I'm slightly, I mean it's, it's still you know, it's still a minefield being a parent. You are constantly unsure whether you're doing the right thing or not but I'm slightly more sure of what I am doing now. So I can, I can make a decision about this and hopefully feel at the end my decision is, is the right one. I'm feeling more confident as a parent now but it, it is the hardest decision that I've ever had, had to make regarding my son.

A friend's decisions for her own children had an influence on her decision.

A friend's decisions for her own children had an influence on her decision.

View topic summary
SHOW TEXT VERSION
EMBED CODE
PRINT TRANSCRIPT
But one friend in particular who is, who is very into an alternative lifestyle, she decided to have all three of her girls, she's got three girls under six and they've all been vaccinated, given the MMR. And I was quite surprised and I talked at length with her about it and came away feeling well, you know, she is someone whose opinions I respect, whose lifestyle I respect although I couldn't live like that myself and she's done, did a lot of research into it and has decided that it's a good thing to do. And she did have a big influence on my decision as well.

Her concerns about what reaction her son might have from MMR was stopping her from taking him to...

Her concerns about what reaction her son might have from MMR was stopping her from taking him to...

View topic summary
SHOW TEXT VERSION
EMBED CODE
PRINT TRANSCRIPT
I'm confused. My main concern is I don't know what to think. I've done quite a lot of reading about it over the last three years since my son was born. Before my son was born I wasn't really that involved. I have a relative who is, who's a GP who is very pro the vaccination as, as a social responsibility. She feels it's my responsibility to have my son vaccinated although she doesn't pressurise me and I have a sister who is at the opposite end. She has MS and she's very into finding out about her own condition. And when I had my son she was very interested in finding out about vaccinations and especially the MMR. She made me think about what's been happening recently.

Half, well not half of me, a little bit of me thinks, 'Well if he does get something mildly then that's, that's better than a vaccination.' I had mumps and measles when I was a kid. The MMR wasn't around, wasn't around when I was, when I was young. I don't really understand now why it seems to be more, more frightening, a frightening illness than it used to be. I don't know whether its more potent, whether there are stronger strains of measles coming in to the country from other countries. I'm not sure of the facts but it certainly seems when I was a child that everyone I know had measles and most of us were fine although my cousin went deaf in one ear as a result of his measles. But most of us were fine with it but because of the worries are being raised about it, you know you think well maybe my son will be the one child that gets measles and then ends up badly brain damaged and it's not a risk I'm going to take.

Her son had a febrile convulsion after his second set of immunisations.

Her son had a febrile convulsion after his second set of immunisations.

Every vaccination he's had so far he, he's been a little bit ill afterwards. And with, with one, the second lot of immunisations he had he was, he was really very ill and he had a, a febrile fit, which I think was linked to the vaccination. I'm not sure. It could have just been that he had quite a bad cold and a fever as well. And that was very frightening in the night he woke up, well we woke up, he woke us up and he was shivering and shaking and we picked him up and he, he wasn't crying. That was the weird thing and his lips were going a bit blue and he was shaking and so we rushed him to the hospital. Oh and he was vomiting everywhere and that was not very pleasant for him or us. We took him to the hospital and they explained that it was a fit induced by high fever. He has not had one since and it, from friends of mine whose children have had similar things it wasn't a particularly bad one but it was still quite scary.