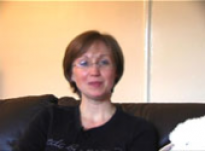 Brief Outline: For DTaP/IPV/Hib' Followed recommendations of health professionals. For MMR she talked to the health visitor and GP, listened to media reports and trusted the decision that her boss had made about immunisation.
Background: At time of interview' married, one daughter, aged 16 months. Parent's occupation' Mother- Civil Servant MOD, Father- RAF. Ethnic background' White-British.

She was influenced by the decision her boss made for her own children.

She was influenced by the decision her boss made for her own children.

View topic summary
SHOW TEXT VERSION
EMBED CODE
PRINT TRANSCRIPT
And it's funny because you do trust the opinions of your friends. Luckily for me I worked for a lady in Germany whose son was a little older than our daughter and she thoroughly researched all of it and it was her that made me aware that the initial study which linked MMR with autism was only actually linked to four, to four, twelve children sorry. And that made me question it then because I had assumed it had been a much bigger thing than that. And also I was lazy in a way, I was frightened to look on the internet because you put in anything medical on the internet and you tend to get all sorts of shock and scare things come up and I thought that would probably do me more harm than good and confuse me more than I was already. So I was content to accept my boss's opinions because I respected her as an individual anyway, so slightly lazy perhaps but certainly easy to go along with somebody else, somebody else's decision.

If she had been able to talk to the doctor who had been her GP for most of her life, she would...

If she had been able to talk to the doctor who had been her GP for most of her life, she would...

View topic summary
SHOW TEXT VERSION
EMBED CODE
PRINT TRANSCRIPT
What were the doctor, your doctor at the time or the health visitors, what were they saying?

I found them quite matter of fact. It was almost as though it was a topic that wasn't necessarily up for discussion. They were far more ready to outline the positives of having the vaccination than not having. To me, the health visitor's issue was either immunisation or not, not how to immunise. That didn't seem to come into the equation.

And for you it was the how to was the important thing?

It was, yes, absolutely. But then that made me think, well perhaps, you know, there are, they're taking this line because they are convinced that there is no real link with autism and therefore it's not a consideration for them. So it's just an awful lot to take on, take in, and an awful lot going on and it's hard to know, you know, when you're not medically minded, how to reach the decision.

I suppose so because, thinking about it, if I had been able to go to the GP that I'd had prior to leaving the UK, who had delivered me and so I had known all my life, I think if I'd have had a chat with him, it sounds silly to say whatever his opinion would have been I would have shared, but I would certainly have respected, yeah, most definitely. Because I would feel that he's, you know, he's the expert, he's better placed than I am to come to a decision.

The safety of the single vaccines worried her so she decided to have MMR.

The safety of the single vaccines worried her so she decided to have MMR.

View topic summary
SHOW TEXT VERSION
EMBED CODE
PRINT TRANSCRIPT
I spoke with the health visitors and the nurses and the doctors at the medical centre and they gave us leaflets. And also there was an advert on the telly that the government did not so long back which sort of made me think as well. And also in the news there had been reports of a measles epidemic at, at Christmas time and so that made me more aware that, that something had to, or a decision had to come one way or the other. The decision for me was not to have her immunised or not, it was the way that, that we chose to do it, whether in the triple vaccine or, or single vaccinations and the single vaccinations worried me because I couldn't be assured of where they'd come from or how they'd been stored and, and, and also friends of ours that have had the single vaccine they were the last set of parents that were able to have the mumps vaccines because then the supplies had run out and so I didn't like the fact that here, I would only be able to have measles and rubella and, and you know we'll just have to forego mumps, so that sort of discounted the single vaccines.

Her daughter had been a little under the weather for a few days after her MMR vaccine.

Her daughter had been a little under the weather for a few days after her MMR vaccine.

View topic summary
SHOW TEXT VERSION
EMBED CODE
PRINT TRANSCRIPT
It was very upsetting, my husband came with me, like I said, and I think I'd got myself in such a state about whether I'd made the right decision that, that was a lot to do with it. I, obviously you're upset because you don't like to see your child in pain, albeit for just a couple of seconds, and in fact after I'd left the room and left my daughter with my husband she let out a yell as you would expect if somebody had stuck a pin in you and as soon as she did she stopped and she was perfectly fine and that pleased me immensely because I, you know, you didn't know if there was going to be some sort of immediate effect. But she was ok, I was in bits and then we, and then we brought her home.

And they warn you that straight away afterwards they might, even if it's just a small bump to the arm or, or raised skin and or some redness and swelling. But luckily for us our daughter didn't react too badly, maybe a little tired, more tired than usual.

She was unwell for a few days afterwards, but nothing you could pinpoint. She didn't come out in a great big rash, and she didn't have swollen glands all round her neck. But the only way I could describe it was that she just wasn't 100 per cent. She just wasn't herself. But at the same time she was teething so it's, it's hard to, hard to tell. But definitely a different little girl, but not, you know, she still ate, she still drank, she still did all the things you expected her to do, she still slept, but just maybe was a bit under the weather is probably the best way of putting it.