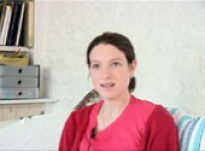 She believes the 5 in 1 vaccine is safe.

She believes the 5 in 1 vaccine is safe.

View topic summary
SHOW TEXT VERSION
EMBED CODE
PRINT TRANSCRIPT
I don't know where I read but I read that actually, I can't remember, I think it was in one of the newspaper articles they were saying that the, the body can handle far more than that, what has been given. You know it's not too much for them and I think they would have looked in to it quite strongly before they actually you know, they must have tested it well, so I'm not too worried about it actually. I've read that they can handle you know many, many more antigens, many more stimulations than what they're actually going to be getting so I'm not concerned about that.

She didn't trust media reports of research studies because she knew that the media could put a...

She didn't trust media reports of research studies because she knew that the media could put a...

View topic summary
SHOW TEXT VERSION
EMBED CODE
PRINT TRANSCRIPT
Well I think there were so many I didn't really know where to trust and you know and there was so much, everyone was saying 'Oh it causes autism,' I didn't feel that, I didn't know who to trust, I couldn't trust them really because you don't really know where they're coming from.

I know there's so much hype that comes up and you don't really know, so in the end I just sort of didn't really take, pay any attention to them and I just decided to. And then of course it did all come out in the end, the big report that it wasn't necessarily a well founded, there was no evidence anyway really. And that was quite a relief then at that point. In some ways, I was sort of like you know 'Oh, good, so I did make the right decision.' Because I think when I had her vaccinated, when I had my daughter vaccinated it wasn't really you know it wasn't quite clear. Yes it was very difficult to know who to trust and who to go to at the time.

Reading the research papers in medical journals gave her the evidence she needed to have her...

Reading the research papers in medical journals gave her the evidence she needed to have her...

Medical journal, yeah medical papers really not from the newspapers, I don't think there was enough information really there. For me I needed to see the papers myself, the conclusive evidence of all the different tests and you know scientifically weigh up if there really was any evidence. And it didn't actually seem that there was any actually any really proper conclusive evidence that it was in anyway causing the MMR.

I think unless you actually see the medical papers then it was quite difficult at the time to make a proper decision.

Right from scratch and then the conclusions that each paper had drawn. Rather than the newspapers because they pick the bits that they want to pick and I don't think you necessarily get a true, I know they say they quote bits of papers but you don't know, depending on what angle they want to give you, they'll skew it and so I don't think you can necessarily trust what you read in the papers. But if you go right down to the research side of things then you surely can, and if you read medical journals or go to medical books to read about the side-effects of various illnesses then they should be truthful.

Her son developed a swelling on his leg 48 hours after his injection which lasted two weeks.

Her son developed a swelling on his leg 48 hours after his injection which lasted two weeks.

I noticed it about the second day and it actually got bigger and I think probably peaked at about four or five days afterwards. It didn't bother him but it was a big hard lump where the vaccine was. I don't know if that was anything to do with the way it was given in any way. But, then I read afterwards that actually the vaccine can cause a reaction, a localised reaction so I presume it was probably a reaction to the vaccine. It didn't bother me but it did last for about I think two weeks almost. And it's actually gone now. I think my husband was a bit worried that maybe I should take home to the doctor in case it was sort of infected but it wasn't sore at all, so I left it and it did actually then go down.

Okay. Did it bother you?

Not too much. I was just keeping an eye on it. No it didn't, I wasn't actually worried about it, but if it had got any bigger or if it had started to get painful, I would have gone to the doctor's in case it was an abscess or something. He didn't actually get any adverse reaction other than that, other than the local reaction, he didn't have any side-effects. I gave him some Calpol when I got home as I was told to do but he didn't, he wasn't particularly feverish or anything like that. And I hadn't noticed any reactions for my daughter when she had those vaccines a year or two ago, two years ago and she didn't have any problems, locally, just a bit of fever. That's normal I think.