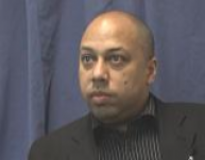 Age at interview: 46
Age at diagnosis: 40
Brief Outline: He was admitted to hospital with PCP (Pneumocystis carinii Pneumonia) and was diagnosed with HIV in 2000. He is involved in helping black African men. (Video and audio clips read by an actor.)
Background: A 46 year old black African who is a highly educated professional with a grown child.

Background' A 46 year old black African, diagnosed in 2000, who is a highly educated professional with a grown child.

Outline' A 46 year old black African who is a highly educated professional with a grown child. He was admitted to hospital with PCP (Pneumocystis carinii Pneumonia) and was diagnosed with HIV in 2000. He is currently experiencing problems with his medication which was being adjusted at the time of the interview. He is active in helping black African men come forward and get tested for HIV and access services. He is also involved in fighting HIV stigma and discrimination.

(Video and audio clips read by an actor.)

Some religious organisations are helpful to HIV positive people while others are not, but people...

Some religious organisations are helpful to HIV positive people while others are not, but people...

Because some of the priests is… some of them are really quite... quite unhelpful to be honest. They tell the congregation not to use condom and throw it away or don't take your medication, you can be cured by coming to the church… they continue indoctrinating the congregation to a point where some people have decided to throw away their medication and become very ill. But some priests address the issue much more positively than the others.

They are telling people not to, put away the medication... person is... So… On the other side they are also quite helpful, you know the churches… HIV positive get quite a lot of comfort in the churches actually… they meet a lot of other people there. You know those... sort of... can be very comforting. Depression and all that and you can discuss your issues… about believing God and all that.

It's been very helpful, along that line. Emotional support... in the churches. You meet other people, you talk freely, you are not isolated you are not alone, you know. If you are strong you can even disclose, the situation and you are strong and you can disclose the issue I mean… some of the congregations are very supportive to HIV positive people.

Because now when you get, you get employed you, they've got to know or understand... someone is employed... has got... in place for HIV positive people, who do understand about the HIV issues. Because some of them can be very, very, very, aggressive they… If they knew you can get sacked... employer knows you are HIV positive the stigma and discrim, the prejudice is out there...

People have been sacked… Assess the situation before you can, you can disclose.

Believes that black African men are accessing services more and getting more support. (Read by an...

Believes that black African men are accessing services more and getting more support. (Read by an...

In the current scene you're seeing that the support and help and services are being given more to African women. But, it's changing. It's very different the… the impact is different now out there.

The African men have come out and they have seen for themselves that really by coming out… and getting, accessing these services, getting involved, participating you know. Then they get to, they're now getting to know a little bit more about the services, they're getting more informed you know.

Some employers have policies that support HIV positive people but others do not. (Read by an actor.)

Some employers have policies that support HIV positive people but others do not. (Read by an actor.)

A number of people... got public and private jobs, in the mainstream jobs, there are quite a number of HIV positive people there. Because some of these employers they've got HIV policies in place. They are being much more aware about HIV, much more... about it. They are not any more ignorant they... or something. So they employ people. And they get more support you know as an employee.

The good thing... is that the DDA, you know the Disability Discrimination Act which the government has brought in place, that's really helped because HIV positive people have been included in it.

So if the employers throw HIV positive people out it can be taken to court now. About two, two and a half weeks ago, three weeks ago I think, an HIV positive person was sacked from a job, then he took the employers to court and he won his case… After assessing the situation you might find it is good to disclose. Sometimes it makes it easier then…if they have a policy in place.