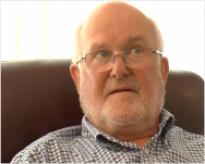 Age at interview: 73
Brief Outline: Robert suspects his heart failure was brought on by a heart attack 24 years ago and then a problem with his heart rhythm 12 years ago. He had a device implanted that will send an electric shock to his heart if it goes out of rhythm, which it did 3 years ago. He takes lots of medicines, is physically active and enjoys life.
Background: Robert is married with adult children. He retired at age 53 from the Royal Navy after a long career, then spent 12 years as a civil servant before finally retiring. Ethnic background: White English.

The first time Robert had a problem with his heart was in 1991 when he had a heart attack. He made a good recovery and had no further problems until 2003 when his heart went out of rhythm and he had to be given an electric shock (cardioversion) in hospital to restore it to normal. Three weeks later he was fitted with a stent and an implanted device (ICD) that would shock his heart automatically if it went out of rhythm again. At first he felt depressed about having an ICD fitted but accepted it after speaking to a psychologist and doing relaxation therapy. Later that year he was hospitalised for pneumonia and told in passing by a doctor that he had heart failure. This diagnosis was confirmed in 2008 when he was found to have a leaky heart valve.

Robert’s ICD was replaced after 6 years but the procedure introduced an infection. After antibiotic treatment the device was reinserted on the right side of his chest instead of the left. In 2012 his ICD shocked his heart when he was sitting in an armchair at home. He went to A&E by ambulance where it happened again. His medicines were adjusted and he spent a week in hospital.

Robert takes 12 pills a day at various times of day and uses a weekly dosette box to organise them. He sometimes forgets his lunchtime ones if he’s away from home but his wife carries spares in her handbag just in case. Some of his medicines have been changed after causing him problems.

Robert attends a yearly nurse-led heart failure clinic at his local surgery and sees his GP at least every six months for his heart and other conditions. He used to see a hospital heart failure nurse every three months but now only when he needs to. He can either see her at a drop-in clinic or make a specific appointment. The nurse discusses his case with a cardiologist and makes changes as necessary to his medication. He has his ICD checked annually at the hospital; meanwhile it is monitored remotely by a machine at his bedside and downloads data automatically every six months. He has fortnightly blood tests at the GP’s surgery to check his clotting time because he takes warfarin. He weighs himself at home about once a week and used to monitor his blood pressure but no longer bothers as it is always low.

Despite his heart condition, Robert lives an active life although he has lost all interest in sex. In the past he has attended cardiac rehabilitation sessions but more recently has joined the gym, which he goes to twice a week. He also does the housework and gardening and walks his daughter’s dog. He sometimes gets breathless momentarily when bending over. He eats healthily and keeps his weight down. He has a positive attitude to life and doesn’t worry about his heart condition. He belongs to a local heart support group that mainly meets socially. He believes that people should take responsibility for their lives and therefore asks for all his test results and has put his affairs in order because he knows that his heart condition will probably cause his death eventually.

Robert was diagnosed 2 weeks ago with a reduction in kidney function which would need regular monitoring with blood tests.

Robert was diagnosed 2 weeks ago with a reduction in kidney function which would need regular monitoring with blood tests.

View topic summary
SHOW TEXT VERSION
EMBED CODE
PRINT TRANSCRIPT
Well, that [kidney problem] was only diagnosed two weeks ago through a recent blood test. And I, I have a blood test every year, but on this particular occasion he wanted me to have another one, because he’s been monitoring whatever it is in my blood. And he saw me two weeks ago after the blood test, he said, “Well, I’ve got to tell you that you’ve actually got….” And he explained to me about the fact that doctors never really took a lot of notice of that particular disease or condition, and you can’t do anything about it, it’s just something you’ve got to live with, but it’s got to be monitored. And he explained to me about all that and said, you know, “We are going to have to have regular blood and urine tests.” And, and I’ve had a urine test and I haven’t had the result yet, but I can go down the surgery and find out. And I know that if there was a problem he’d ask them to send for me to see him.

Robert explains what happens at each of the appointments he attends with different health professionals.

Robert explains what happens at each of the appointments he attends with different health professionals.

Well, I have a heart failure nurse and she comes from another area, but I see her when I want to see her, ‘cos she runs a drop-in clinic. And I go to another hospital for that.  And in fact, I’m seeing her tomorrow. And I can see her any time, ‘cos I can ring up and either make an appointment or just go and see her at the drop-in clinic. At the surgery, once again they have an annual nurse-led heart failure clinic, which involves, you know, blood pressure, height, weight, advice, medication, things like that. The GP I see quite a lot because I’ve got other conditions on top of the heart failure. But as far as the heart is concerned, at least every six months. And, in fact, when I go and see him about something else, he sometimes takes my blood pressure anyway. And he said, “I think you are in very good, doing very good and in good health apart from the fact that you’ve got a few problems”. I don’t see the cardiologist. If I wanted to I could just ask, ask the heart failure nurse and she would refer me. But she actually works for a cardiologist and, for example, she changed my medication once. And the way she did that was that, they have a meeting every week in the hospital with a cardiologist and she brings up my case to him, and he said, “Yeah, that’s a good idea.” And she changes it. So that’s a full monitoring, as far as I’m concerned.

Robert had phoned the NHS non-emergency number 111 on several occasions and found it excellent.

Robert had phoned the NHS non-emergency number 111 on several occasions and found it excellent.

If I felt very unwell and I thought maybe it was due to the heart, like the breathlessness that I had, which I don’t think was due to the heart, ‘cos I had an infection in my sinuses, and that was a major infection, you know, during the winter. I’m not sure, really. I suppose because you’ve got heart problems you know and you have a feeling when you need to do something about it or seek advice. I’ve used the 111 service I think three times, and they are excellent. And on one occasion when I thought that I had a problem with breathing, I went to the 111 service on a Saturday morning and I had an appointment with the out-of-hours GP clinic that afternoon, which is done at the hospital round here. So I’ve got nothing to worry about as far as that’s concerned. The 111 service down here is excellent, ‘cos it’s run by the ambulance service, so people who talk to you know what they’re talking about, or how to talk to you [laughs].

Robert started cardiac rehab 24 years ago; he has since joined the gym and attends on the same day as the rehab classes so he can socialise with the other people.

Robert started cardiac rehab 24 years ago; he has since joined the gym and attends on the same day as the rehab classes so he can socialise with the other people.

View topic summary
SHOW TEXT VERSION
EMBED CODE
PRINT TRANSCRIPT
But we also have a heart rehabilitation group, which means that you go to the gym. And I’ve done that since 1991. And now, I do my own thing, but when I first started it was done by a retired GP and a nurse who used to take your blood pressure before the exercising, give you a set of exercises to do, and then take your blood pressure at the end. That doesn’t happen now. And that was when, officially, the GP, the heart, the heart group did part four of the rehabilitation course, after my heart attack in ’91. Now they don’t do that. It’s done by professionals at the hospital or somewhere around, from the hospital, because they have, they have rehabilitation nurses. And you go through a system of four stages, I think. So now, I mean I just go to the gym and I know what I can do and what I can’t do. And it’s, it’s mainly things like walking on the treadmill and a little bit of weights, exercising the tummy, things like that. You know, cycling, general things like that really. Do about an hour and a half. That’s sufficient.

That’s fantastic. And how often, how many time a week…?

Twice a week, at least. I can go as many times as I like, ‘cos I’ve joined the gym now. We’ve all joined at a special rate because we are heart patients…

…which is nice of them.

And although I do tend to go on days when they’re there, the rest of them, so we can all meet socially at the gym as well, [laughs] chat about things.
Previous Page
Next Page