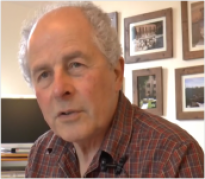 Age at interview: 67
Brief Outline: Two years ago Peter developed breathlessness at night and fluid retention. A blood test revealed heart failure. He had previously had three heart attacks and been treated for atrial fibrillation. He attends nurse led heart clinics several times a year and also sees a cardiologist annually.
Background: Peter is a retired university tutor and is married with grown up children. Ethnic background: White English.

Peter’s heart failure was diagnosed two years ago in 2013 on a blood test done by his GP when he was experiencing breathlessness at night and fluid retention. He believes it was caused by damage to his heart muscle from three previous heart attacks (2001, 2006, 2006) in combination with atrial fibrillation (AF). Peter received the diagnosis on the same day he was due to have a cardioversion for his AF, which went ahead and succeeded in putting his heart back into normal rhythm. He was also put on a diuretic (water tablet), which corrected the fluid retention causing him to lose a stone in weight.

Treatments for Peter’s various heart problems have included: a total of five balloon angioplasties, the surgical removal of a large aneurysm of one of his coronary arteries together with a bypass of the damaged artery, several cardioversions and two ablations to correct his heart rhythm, each of which have worked only temporarily – he recently discovered he has gone back into AF again. Peter currently takes bisoprolol, aspirin, warfarin, ramipril, furosemide (diuretic), a statin, plus lansoprazole to counteract gastritis caused by the aspirin. He organises his medicines using a weekly dosette box.

Peter sees a specialist cardiologist once a year and also attends nurse led heart function clinics and AF clinics in hospital several times a year where he has blood tests taken, his weight and blood pressure measured, and sometimes an electrocardiogram (ECG). He can phone the specialist heart nurses at any time and also has support from the nurses at the warfarin (anti-coagulation) clinic. He has regular blood tests through the clinics or the GP and assumes the results are satisfactory unless told otherwise. He feels he has enough information about his heart condition and worries less about it now than he used to. He rarely sees a GP about his heart; decisions about medicines and dosages are mostly taken by the hospital specialists and relayed to the GP. Peter feels well supported by his health professionals and is happy with the way his condition is managed.

Peter dislikes the term ‘heart failure’, preferring to think of it as ‘inefficient heart function’. He lives with his condition and exercises to maximise his heart function. He is currently attending cardiac rehabilitation phase 4 exercise sessions with a trainer. He has lost weight through reducing the amount of food he eats and feels much fitter and healthier than he was before his heart problem began fifteen years ago. He currently experiences no symptoms of his heart failure, and lives an active life. His general health is good, he keeps busy and feels positive about the future.

Peter says beta blockers depress his ability to be active; he sometimes feels light headed because the drugs have lowered his blood pressure.

Peter says beta blockers depress his ability to be active; he sometimes feels light headed because the drugs have lowered his blood pressure.

View topic summary
SHOW TEXT VERSION
EMBED CODE
PRINT TRANSCRIPT
I think the bisoprolol, as a beta-blocker, slows you down, depresses your activity and makes you feel knocked off, and that has affected me, probably, and I think still does but you kind of work through it, and  I know, I know many people who’ve stopped taking their beta-blocker or other medication because they felt better not taking it. But you run the risk of losing the beneficial effects of the medication, which is supposed to protect you or treat you.  I’ve had a bit of side-effect with ramipril. It has occasionally, it has the effect of inducing a bit of dizziness, and because my blood pressure is lower than it might be, you, the combination of the two, the beta-blocker and the ramipril, causes what they call positional hypotension, where your blood pressure has dropped and, when you get up you feel a bit light-headed if you, if you come up too quickly, that sort of thing. And of course warfarin has the inevitable side-effects of that you bleed or bruise, or both, more easily than you might otherwise do. But, apart from that, not too bad. Oh yes, aspirin. Aspirin has an has an effect on your gut, so I did have gastritis at one point, so I take a PPI medication. It’s currently lansoprazole as a, as to combat the gastric side-effects of aspirin and all the others combined, yeah.

Peter has occasionally forgotten to take his medicines at the right time and has sometimes taken his morning ones instead of the evening ones by mistake.

Peter has occasionally forgotten to take his medicines at the right time and has sometimes taken his morning ones instead of the evening ones by mistake.

View topic summary
SHOW TEXT VERSION
EMBED CODE
PRINT TRANSCRIPT
The only way I can organise myself is to use what my wife calls a weekly dosette box. So you’ve got, you’ve got containers for all, for days of the week and each container has got four compartments, should you need to take medicine four times a day. And if I don’t fill that up with medication every Saturday morning, I’m lost. And if I’m running out of stuff I just ring the local chemist and they do a repeat prescription for me, which comes through by the end of the following week.

So have you ever forgotten to take anything when you should have done?

Occasionally. Occasionally. And the other mistake I’ve made is to pick up the dosette box and hold it upside down and taken the morning tablets in the evening or vice versa.

Peter avoids one GP in his local practice after they suggested a treatment that Peter felt was inappropriate for him, prompting him to seek the opinion of his cardiologist.

Peter avoids one GP in his local practice after they suggested a treatment that Peter felt was inappropriate for him, prompting him to seek the opinion of his cardiologist.

View topic summary
SHOW TEXT VERSION
EMBED CODE
PRINT TRANSCRIPT
There’s been one GP who is supposedly a cardiac specialist within the practice, and I’m sure he is but his advice hasn’t always been of the best, and fortunately in one particular case I knew enough to turn down the medication he was offering and said I would rather have an opinion of, from the cardiac specialist at the local hospital, specialist hospital and to put that off until I got a view from them. And I just feel that his judgement is not always good, not for me anyway, at particular times, and it just shows you that how much specialist knowledge you need to be able to treat somebody like me who I know has had, even within cardiac disease, a fairly, a different route. I don’t think I’m, well, everybody is different of course, but I think my experience has been unusual in terms of heart disease and I feel that very few GPs would, would have enough knowledge to know where I’m at, and some could make big mistakes. Having said that, within the practice there are 9 or 10 GPs, and I’ve found one younger GP, who I think is maybe about 35, who actually guessed that I had heart failure, and therefore advised the, was taking it down two possible tracks and asked me to go for a blood test, which in fact showed up heart failure at about the time I was to have a cardioversion. So he made the correct judgement, and in fact the very young GP I saw 15 years ago guessed that I’d had an angina episode on holiday in New Zealand and sent me immediately for a treadmill test at one of our local hospitals where we lived before. And so their judgement has been, you know, they’ve spotted the conditions very well. It’s just that with one GP I have a problem, so I avoid that GP.

Peter’s specialist nurses had told him not to hesitate to seek help if he was at all concerned about symptoms and he wouldn’t be wasting anyone’s time by doing so.

Peter’s specialist nurses had told him not to hesitate to seek help if he was at all concerned about symptoms and he wouldn’t be wasting anyone’s time by doing so.

View topic summary
SHOW TEXT VERSION
EMBED CODE
PRINT TRANSCRIPT
You’ve just described to me what would make you get help what you would do. But has that advice come from health professionals or is it just common sense?

Well, certainly, let me think, well, it’s partly common sense but and obviously talking to others and knowing other people’s experiences, but yeah, the nurses, the specialist nurses, are very open and say, “If there’s any problem whatever, contact us and if you do end up in casualty on your own initiative and been, you know, with chest pain”, and there have been several instances where that hasn’t been a problem but I’ve gone in, didn’t know there wasn’t a problem but, and then you feel, ‘Oh, have I wasted people’s time?’ You speak to the specialists there at casualty and they say you didn’t waste their time. “It wasn’t a mistake and with your background, if you suspect any problems, you come in and you don’t take a risk. You just come in and we’ll understand. We understand.” Sometimes you can ring the GP out of hours service and they’ll, if they feel it’s serious, they can get you into the casualty system quicker than just waiting in the waiting room, even if you’re not an ambulance case. And so you pick up these bits of advice but the specialist nurses at the two areas I’ve mentioned  are, you know, they say, “Don’t hesitate, you can always ring.”

Being retired Peter doesn’t find attending hospital appointments difficult and sometimes combines the longer trip to the specialist hospital with a theatre visit.

Being retired Peter doesn’t find attending hospital appointments difficult and sometimes combines the longer trip to the specialist hospital with a theatre visit.

View topic summary
SHOW TEXT VERSION
EMBED CODE
PRINT TRANSCRIPT
There are just downsides in the, in the sense that the specialist hospital is obviously a longer distance away than the local hospital.  But because we’re retired we can often combine that, if things aren’t too traumatic, with something else. Dare I say, even a theatre visit. That’s what’s going to happen this Wednesday. We’re going from the appointment to the theatre.

Yes. So in retirement it’s not so bad, and because both my wife and I are getting to the point where, you know, things by, through age are breaking down anyway and we’ve all got our particular weaknesses, we’re getting used to hospital appointments. We’re not fighting it.

I don’t take my blood pressure. We do have blood pressure machines but I’ve rarely used them. Again, I don’t want to get to the point where I’m testing myself. It could become obsessive, and I don’t want that. And blood pressure is a pretty sort of erratic, rapidly varying measure, and you can get, you can get the white coat effect, you can, you know, you’ve come in from the garden, you haven’t really relaxed or whatever or you, you know, whatever, all sorts of things can raise or lower your blood pressure and so I don’t, I don’t think it’s worth doing. I get it tested regularly enough.

And is it pretty stable when you have it tested by the medics?