Having a sibling on the autism spectrum 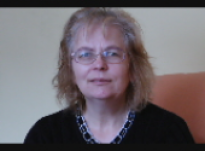 Age at interview: 50
Brief Outline: Alison's younger brother was diagnosed with autism in 1976 when he was aged 9. He now lives in residential care.
Background: Alison is married and has two children aged 23 and 21. Ethnicity/nationality: White British.

Alison is the eldest of five siblings. One of her brothers was diagnosed with autism when he was nine. There is a seven year age-gap between them and he is now forty-three. She described the relationship between them as “not really a normal relationship”. She does not see him often now because he does not live nearby and she also thinks there is little point as they cannot communicate verbally.
Alison believes that as a child her brother did not get as much help and support as children with autism do today because there was less awareness about autism then. He now lives and works on a working farm for adults with learning disabilities.
Alison thinks that the occurrence of autism in her family was a “bit of a freak thing”. Her parents were told that it was probably genetic, but that the other family members should not worry and so she was surprised when she found out that her daughter also had autism. However, as a result of the experience with her brother, she was able to recognise the signs in her daughter and ensure that she “pushed a lot harder to get the right help” for her daughter than her parents had done for her brother. She summarises her experience of growing up with a sibling with autism as “untypical” and “very difficult”.

Alison talks about how her knowledge about autism was helpful when her daughter was diagnosed.

Alison talks about how her knowledge about autism was helpful when her daughter was diagnosed.

I mean actually, I mean the biggest, biggest impact it has had, is because with my children because actually one of mine is actually on the autistic spectrum, one of my children. And having had that experience, well, a) I realised what I was dealing with quite quickly, compared to a lot of parents. I could recognise the signs, and I pushed a lot harder to get the right help for mine and she has actually done really well. And of course you can’t compare one with another. You don’t know that my brother would have done better. But knowing what I know now, what’s available in special autistic provision schools, I do think that having had more appropriate help, he probably would have done better, but how much better you can never know. So that’s yeah, so actually in my personal life as a adult, that’s had a huge success impact. It was very odd because I mean we were told, or my parents were told when my brother was diagnosed, “Oh, yes, it’s genetic, but nobody else in the family need worry.” So yeah, I was surprised to have it coming up again in my own children, but at least I knew. I had some idea what I was dealing with.

Alison was unsure if she would become her brothers guardian or if the local authority would take...

Alison was unsure if she would become her brothers guardian or if the local authority would take...

View topic summary
SHOW TEXT VERSION
PRINT TRANSCRIPT
Well really I suppose that, you know, what remains of his life, is as happy and fulfilled as possible. I mean fortunately in a way, I mean one thing my parents and my mum did was, she, after he’d been to boarding school, she refused to have him home full time. So he has always been in care as an adult. So he, at least has got somewhere to live, which always does seem quite a suitable, as good a place as you could expect or imagine under the circumstances. So at least I haven’t got to worry about, I might have to, where’s he going to live? Who’s going to look after him, sort of thing, because he was in the care of the local authority. So that’s okay. So it’ll really be more like if he needs anything, having access to the funds and that he has... he enjoys as far as he can the rest of his life. I don’t know how long that’ll be. Since he’s been an adult he’s also been diagnosed with epilepsy. I don’t know whether he had that at all as a child. But anyway that’s since been diagnosed. And I don’t know what other health problems he might have. He’s very overweight because eating has long been one of his few comforts, so I mean, that’s not good from a health point of view, so the long term repercussions of what that might be, who knows?
And do you think you’re going to become his guardian?
I don’t know. I don’t know what my mum’s Will says about that. But it might be, actually, that the local authority is the guardian. I don’t know actually.
And how would you feel if you did become his guardian?
I wouldn’t object. I would then try and find out what that involved. What I’d need to do, and try to make sure I did that.

Alison would have liked to attend a support group when she was growing up as long as it had been...

Alison would have liked to attend a support group when she was growing up as long as it had been...

View topic summary
SHOW TEXT VERSION
PRINT TRANSCRIPT
And would you have found a support group helpful do you think?
As a child that’s very hard to say, very hard to say. It would have depended on what they offered maybe, but it’s hard to know. It might have…
Okay so looking back on it now, you would have liked some information and maybe some supportive counselling?
Bearing in mind I was that bit older when he got the diagnosis and counselling perhaps wouldn’t be that useful for a sibling, you know, quite a young sibling. But yes, I think certainly some information, some guidance, some counselling. Perhaps a support group, but that would have depended on what it did, if it was just sort of outings and activities that might not have been my sort of thing. Depending on where they went and what they did.

Alison says that you need to remember to put your things away in case your sibling breaks them!

Alison says that you need to remember to put your things away in case your sibling breaks them!

Well it’s not just thinking about yourself. You’re always having to think about somebody else as well. Not always in a positive way [laughs]. Not just thinking about making sure their needs are met, but also making sure they don’t, thinking about what they’re, what they’re inclined to do, and making sure that’s not going to disrupt your life too much. So you’re always conscious of that at the same time as you’re dealing with your own life because you always have to remember to put some of your things away that he might want to come and fiddle with or break or something. It’s that sort of thing. You’re always having to bear that in mind. So there’s always the two things to think about. And everybody else probably just had the one.

Trying not to upset their brother triggered a lot of rows between other family members in Alison...

Trying not to upset their brother triggered a lot of rows between other family members in Alison...

But of course, our family was much larger, than most other families that I knew, so it might have been down to that. Yes, we were a bit, some of the time we were a bit treading on eggshells to sort of make sure that nothing happened to cause any upset for my brother which would then, often then, you know, triggered a lot of rows between the rest of the family if, you know, so there was quite a lot of back treading on eggshells and things to try and indulge his routines and other requirements. But every now and then it would get too much for somebody and they would get upset and start, shouting and so on. And that could have been any of us. Might have been my parents. My Mum sometimes got quite upset. Might have been me. I sometimes got upset. My other brother sometimes got upset. I don’t remember my younger sisters getting that upset. But yeah, so it did make the sort of emotional relationships, I think, more fragile than they might have been anyway.