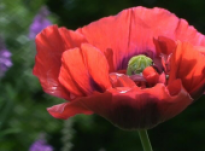 Age at interview: 63
Brief Outline: Interview 7 has one grandson who had been diagnosed with autism.
Background: Interview 7 is married and has two children.

Interview 7 has five grandchildren. She feels very close to them all. One of her grandchildren has autism. He and his family live about a four-hour train journey away, so she sees them approximately every two months. Interview 7 was surprised when she found out about her grandson’s diagnosis and wondered if they were mistaken. She describes how she “went through a phase of grieving” and then later she began to accept it. She describes her grandson as “a very gentle soul” who gives the family “a lot of joy”. According to Interview 7, her grandson has not often spoken, so the occasions on which he has have been very moving.
Interview 7 describes how she used to invent games to play with her grandson. He finds repetitive activities very funny. Interview 7 says she sometimes feels sad because she has less contact with him now because it is difficult to find common interests now that he is no longer a toddler.
Interview 7 said she is full of admiration for her daughter who’s continuously finding ways to improve her son’s communication skills. She is very close to her daughter and gives her as much support as she can, and describes then as “good friends”. She searched on the internet for information following her grandson’s diagnosis and found books written by autistic people themselves very helpful. This was because they discussed their own experiences and helped her to understand her grandson better.
She believes that her role as a grandmother is to give her grandchildren “good childhood memories”. She summarises her experience by saying that her grandson is a “wonderful gift” and that she is “incredibly happy” when he makes progress.

View topic summary
HIDE TEXT
PRINT TRANSCRIPT
Can you remember back to when he was diagnosed? What led up to that?
I’m just trying to think. Well she always worried about the fact that he couldn’t nurse very well. He would nurse a bit, and then he’d scream and scream and cry and then he’d nurse a bit and scream and scream and cry. When he was born, I was there and I had him in my arms for several hours while she caught up on a bit of sleep, and he was fretting and crying all the time. And it’s very unusual, because when a baby’s born for the first twelve hours they sleep very deeply, so the mum then has a chance to have a sleep as well – the last sleep for many months. And I thought that it was strange. So that was the first sign, it was very unusual. And then it went on like that for many months. He wouldn’t nurse properly, he was always being sick, he slept very, very badly and he was always fretting and always crying. I remember taking him out once and he was just non-stop, always upset, always crying.

Interview 7 describes her feelings about her grandson's diagnosis.

Interview 7 describes her feelings about her grandson's diagnosis.

Well at first I was sort of shocked, and I wasn’t totally sure that it was right, that they had it right. It was like a denial, you know, I wasn’t certain that they had got it right, and to be honest Ii didn’t know much about it. So I did lots of research on the internet and started reading up on it and then started to think of ways to help, because he was getting a little bit older then, and he wasn’t starting baby talk. So I then, found out, there was an American company who’d had some success with autistic children with a DVD, with pictures and sound to help them to learn to talk. So at the time she wouldn’t have been able to afford that. So I ordered them from America and then sent them to her. And it had no effect at all. But later on when he was older, she played them again and he started to take a bit of an interest because it showed some of his favourite animals. I think that for a long time I went through a phase of grieving really, you know, you don’t realise it but you go through a phase of grieving and then later on you start to accept it, that that’s basically how it happens.

Interview 7 encourages her daughter as much as possible and tells her what a fantastic job she is...

Interview 7 encourages her daughter as much as possible and tells her what a fantastic job she is...

It’s already very difficult to feel that you’re a good mum when you have an autistic child.  She is a very good mum. She’s fantastic. And I keep repeating that to her. I keep reinforcing that to her, and saying how much I admire her, and that she’s so brave and that she does a fantastic job. And I don’t say it in general. I give her examples and I do tell her, and it’s true, a lot of mums would just accept, and she doesn’t, she doesn’t accept, she pushes him  in all sorts of possible way to make progress. Wherever she sees an opportunity like with this circus school, she thinks yes, let’s, let’s try this, let’s try that.

Interview 7 found an autobiography gave her 'good insight into what happens inside a person'.

Interview 7 found an autobiography gave her 'good insight into what happens inside a person'.

View topic summary
HIDE TEXT
PRINT TRANSCRIPT
There was a book which came out. I think it was called “Blue days”, but it was about somebody who is on a totally different spectrum. He is some kind of a genius really, you know, but it was all the same very interesting, because I read it and it really made me understand what it’s like to be autistic. I hadn’t realised certain things. So that was a very moving book and it was very useful. And I passed it on to my daughter, and I did say to her, “I know [name] isn’t like that. I know this is a very different person. Don’t think that I’ve got dreams or aspirations for [name] that he is going to be like that. It’s not that, it’s just that it gives you such a good insight into what happens inside a person.”
And I found that book very, very helpful because he talked about his childhood. He became very famous in the end because he was able to do incredible things with numbers. He could do the most extreme sums in one second. He’s very famous and he wrote a book about it. But he talked about his childhood and what it was like to be autistic. And it’s good because you go through phases, that’s something I didn’t mention, you have moments where you feel as if, the autistic person has no feelings. You know, it’s very, it’s not a nice thing to say but it’s true. And you wonder if they have any feelings at all, sometimes.
I used to work with deaf and blind people a long time ago, and it was a very intense job because you had to keep looking, especially with the person who was deaf and blind at the same time, and mute, if you had the three combined, you had to keep looking at their faces and the whole body to try and get through, desperately try and get through and get some communication and it’s a bit like that with [name], but not as intensively. But reading that book helped me, when I read about all his feelings, all the things he felt, you know. That book made me very careful as well. Because I thought, yes, be very careful, don’t take things for granted and assume things.

Interview 7 says that the happiness she feels when her grandson says something is 'incredible'.

Interview 7 says that the happiness she feels when her grandson says something is 'incredible'.

View topic summary
HIDE TEXT
PRINT TRANSCRIPT
An example of how she teaches him to do things which do not come to him naturally; he will rarely come and give somebody a hug spontaneously, but if you’re sitting on the settee, he likes to come and stand behind you on the settee and then he will wrap his arms around you from the back. Because it reminds him of a game we used to play with him, but he does like the physical contact, which is very strange according to what they say about autistic children. But he will give you a really good hug from the back, and he really loves that. And he likes it if you hug him, in the middle of a game. If it’s playful then he will be okay and he will love it. And he likes it when his mum hugs him too. But for him to go up to somebody and spontaneously give them a hug was difficult.
As he started to show an interest in cuddly toys recently. So they have bought him a very large rabbit, because he likes rabbits. They started role playing with this rabbit by hugging the rabbit, and a bit later he did give the rabbit a big hug, and then he went up to [name], my daughter’s partner, and gave him a big hug. So that was very moving.
So what I’ve found is that, in spite of all the sadness and the frustrations you experience, is that you receive fantastic gifts. When he says something every four months, the happiness you feel then is just incredible. When he achieves something new, it really moves me, because it is so small, it is so incredibly small and it is so important.
Previous Page
Next Page