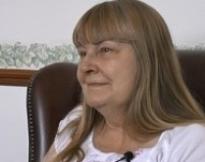 Brief Outline: Val has had three attacks of gout in her big toe joint. She is unable to wear the shoes she used to wear before she had gout. Val takes 300mg of allopurinol every day, but does not feel confident that her gout is completely under control.
Background: Val is married and lives with her husband and three of their six children. She is retired, and previously worked as a school Library Assistant. Ethnic background/nationality: White English.

Val had three attacks of gout in her big toe joint within eight weeks. She woke up one morning last year with a burning, throbbing pain in her foot. Her big toe joint was very red, hot and swollen. Val could not believe how bad the pain and discomfort were, but immediately realised that she had gout. Val’s mother and father were both diagnosed with gout when they were in their 50s. Her father’s story is particularly memorable to Val because he had to come home on the aeroplane from a holiday abroad wearing a slipper because he could not get his shoe on. He felt so embarrassed that he never went abroad again in case he got an attack when he was away. Now that Val has had gout herself, she wishes that she had given her parents more sympathy when she was younger, but at the time she did not realise how bad the pain was.

When her first attack started she visited her GP who prescribed colchicine. Val took colchicine for a while but it gave her bad diarrhoea and nausea, and she reached a point where she felt she could no longer continue taking it. Val then had another attack of gout and went back to see her GP. The GP prescribed 300mg of allopurinol for Val to take every day. Val then had a third attack of gout and her GP sent her for blood tests which showed that her uric acid levels were high. Val’s GP told her to continue taking allopurinol for the rest of her life.

Val has tried to reduce the amount of red meat she eats, but finds it difficult to make major changes in her diet because of the food preferences that the rest of her family have. She remembers her father having cider vinegar because he believed that it helped with his gout. Val tried taking it but found that it upset her stomach.

Gout affected Val’s walking and stopped her from driving during attacks. Housework and cooking for the family was also difficult. She could not bear to have a sheet touching her foot in bed and the pain stopped her from sleeping. Val could not get any of her shoes on so at one point she had to walk to her local shops in her slippers. After Val’s attacks of gout, her foot has not returned to its previous shape. She has had to buy new shoes in a larger size, and can no longer wear the shoes that she would like to.

Val sometimes feels embarrassed about having gout because she thinks that people will assume it is caused by alcohol. In actual fact, Val has not had an alcoholic drink for 17 years because she had Pancreatitis three times and was told not to drink alcohol again.

Sometimes Val feels that another attack of gout might be starting in her toe joint. She does not feel confident that her gout is under control, and wonders if she should be taking a higher dose of allopurinol. She would welcome regular reviews with her GP to discuss the management of her gout.

Val wished that she had been more sympathetic towards her parents. Being diagnosed helped her to understand how bad it had been for them.

Val wished that she had been more sympathetic towards her parents. Being diagnosed helped her to understand how bad it had been for them.

View topic summary
SHOW TEXT VERSION
EMBED CODE
PRINT TRANSCRIPT
Both parents had gout. I don’t know whether my grandparents, because they all died fairly young on both sides, so I don’t really know. But my mother got it first. She’s about three years younger than my father. I think she would have been about 50 at the time. And because my mum had had a lot of ill health and we’d got so used to it over the years you sort of disregarded it. You thought, ‘Oh yeah something else’. Then my father got gout and they were great - they loved travelling, they used to have three holidays abroad every year and they used to vary where they went in the world. Well one year my father came home from this holiday and he was absolutely mortified. He had to come home in a slipper from the aeroplane and he was so embarrassed because he was a very shy man, really really embarrassed and he said, “That’s it I’m never going abroad again” because of this gout you see.

So he looked into it, because my dad was like that, he’d read up whatever he could and he did this really restrictive diet. He would only have chicken or fish, he wouldn’t have any red meat at all. And he did this cider vinegar which was absolutely awful, he lost a load of weight because of this diet. And I didn’t really give him the sympathy, or my mum, the sympathy that I should have done. Looking back now, you know, 20 years on, I think, “Oh I shouldn’t have been like that, I should have been more gracious to them”. But when I got my first attack I couldn’t believe it. I just could not believe the pain and the discomfort.

Val felt fed up about getting gout on top of her other conditions, all in the same month that she injured her neck.

Val felt fed up about getting gout on top of her other conditions, all in the same month that she injured her neck.

View topic summary
SHOW TEXT VERSION
EMBED CODE
PRINT TRANSCRIPT
At the same time, the very same month it started, I actually sustained a neck injury with… called wry neck and so I felt I’ve got this bit and I was actually in a collar. I’ve got this bit and I thought, “It’s just not fair”, you know, as well as everything else in between that’s gone wrong like my spine and hips and I thought, “Oh it’s not fair”. You know, and it did seem a pretty grim time of my life actually. I was in a lot of pain from my neck.

Val found it difficult to sleep during an attack. She could not bear the duvet touching her foot. Turning over also caused pain.

Val found it difficult to sleep during an attack. She could not bear the duvet touching her foot. Turning over also caused pain.

View topic summary
SHOW TEXT VERSION
EMBED CODE
PRINT TRANSCRIPT
Well you can’t sleep with it. It’s absolutely terrible. Like the duvet, it doesn’t matter how light it is, you feel that you want one of those cradle things over your foot. You just can’t bear touching. And even turning over in bed, the pain was so bad like brushing against the sheet it was so bad, it was really quite a bad pain.

Val felt that having gout, and not being able to wear the shoes she wanted to, made her feel older and less feminine.

Val felt that having gout, and not being able to wear the shoes she wanted to, made her feel older and less feminine.

View topic summary
SHOW TEXT VERSION
EMBED CODE
PRINT TRANSCRIPT
Well the main thing with me has been shoes. I can’t … couldn’t get many of my shoes on and I kept thinking, “Oh it’ll go down, it’ll go down”. But I did get sent for an x-ray and they said that I had arthritis in both big toe joints. And so I thought, “Well if I’ve got arthritis and this gout’s come along to add a bit more to it, I probably am never going to get those shoes on again”. Which in fact was true, I couldn’t get the shoes on again. And that, because they were girlie shoes, that really was a disappointment. I know it might sound a bit trivial to people but it’s like your image of who you are isn’t it? And I felt very old as well. You know that kind of feeling, “Oh dear I’ve joined the old age pensioners now”, you know.

Because of the shoes?

No, no the shoes and the gout, you know, the fact that … in fact I haven’t told many people I’ve got gout.

Because it feels so old I think. It feels as though it’s something that people sort of in their dotage have, not young people. Or young … I mean I’m not young, but in my head I’m young, yeah.

Val would find regular reviews reassuring. She asked her GP to adjust her repeat prescription so that she didn’t have to renew it as frequently.

Val would find regular reviews reassuring. She asked her GP to adjust her repeat prescription so that she didn’t have to renew it as frequently.

View topic summary
SHOW TEXT VERSION
EMBED CODE
PRINT TRANSCRIPT
What message or advice would you give to health professionals who are working with patients who’ve got gout?

I think to keep an eye on us really. And to automatically …like you get for your blood pressure you get a review or you get your flu jab don’t you and asthma warnings and, I think would be to keep an eye on us and maybe to flag up on their computer six monthly or something, “Review this patient about their gout”. I think that would be really, really helpful.

Yes, I think reassurance that you are being looked after instead of just doled out this packet of tablets every month, two months whatever they prescribe them. I mean mine was monthly, and I was getting to the position where I was almost running out before I remembered to renew it so last time I renewed it I put a little note on the prescription, “Please could I have two monthly as I’m on it for long term” and it did come back two monthly and I thought, “Oh thank goodness for that”. I mean it’s just little things like that and you think then you wouldn’t get caught out. Like you’d go to wherever you keep the medication, you’d get out the second packet and you think to yourself, “I’ve got to watch this now because I’ve started on my second packet”. Because when you’ve just got a month’s supply you tend to just forget, you know, that would help.
Previous Page
Next Page