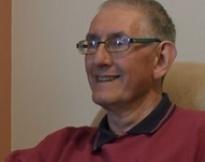 Age at interview: 67
Brief Outline: Ray experienced his first attack of gout about 20 years ago in his big toe joint. His GP referred him to see a specialist who recommended that he took long-term medication. Ray takes allopurinol every day and has not had any attacks in the last 12 months.
Background: Ray is widowed and lives alone. He has two daughters. He works part-time as a Tax Officer. Ethnic background/nationality: White English.

Ray’s experienced his first attack of gout about 20 years ago. He woke up in the middle of the night with an agonising pain in his big toe. He wondered if it was cramp, but the pain did not go away so he went to see his GP. The GP told him that he had gout. Ray found this difficult to believe because, at that time, he thought that gout was generally associated with drinking lots of alcohol.

The GP prescribed Ray some tablets to relieve the pain, and sent him to see a specialist.  The specialist advised Ray to start taking allopurinol, and told him that he would need to take the tablets for the rest of his life to prevent attacks from occurring.

Ray remembers the pain of gout feeling like someone was stabbing a knife in his toe. He could not put his shoe on and it was difficult to walk. It also stopped him from playing badminton.

Ray has had no attacks of gout in the last 12 months. He occasionally gets a sudden sharp pain in his foot or toe that last for a few seconds, but he is unsure whether this is due to gout. He takes allopurinol every day and does not foresee himself having any problems with gout in the future.

Ray takes allopurinol every day. The tablets are small and he does not mind taking them because they have stopped his attacks.

Ray takes allopurinol every day. The tablets are small and he does not mind taking them because they have stopped his attacks.

View topic summary
SHOW TEXT VERSION
EMBED CODE
PRINT TRANSCRIPT
They did say that, once I went on allopurinol, I would be on it for the rest of my life, but I mean it’s one tablet a day. There has been occasions when I’ve missed, but it’s very, very rarely that I miss more than a couple of days. If I’ve missed it, it hasn’t caused any problems. But I’ll, you know, I’ll quickly get back on it, I remember what the pain was like. It hurts [laughs].

The fact that I was in my 40s and they say you take this tablet every day for the rest of your life, but it’s one tiny tablet once a day not like, you know, people that’s on all these drugs having to take 10 and 20 tablets a day. I was having to take one to solve the problem and, you know, so it’s nothing is it, you drink more cups of tea, more cups of coffee, just have one tablet that’s it, you know, brilliant.

Ray said gout was incredibly painful. It felt like someone stabbing a sharp knife into his big toe.

Ray said gout was incredibly painful. It felt like someone stabbing a sharp knife into his big toe.

View topic summary
SHOW TEXT VERSION
EMBED CODE
PRINT TRANSCRIPT
It’s just absolutely agony, you just go from feeling fine and then I suppose it’s as if somebody gets a really sharp knife and just stabs it in your big toe, and you virtually jump up and hop round [laughter] so yeah very, very painful. Incredibly painful.

And when you’ve had the symptoms has it always been in your big toe?

Yes – yeah I’ve just had it in there, in there and I think on other parts of my foot but on my big toe is mainly where I remember it, so.

Ray occasionally gets a sudden pain in his foot and wonders if it is gout.

Ray occasionally gets a sudden pain in his foot and wonders if it is gout.

View topic summary
SHOW TEXT VERSION
EMBED CODE
PRINT TRANSCRIPT
And then you sort of described you’ve had sort of…?

Niggles now and again, but that’s all they’ve been

Well just your – you know basically get maybe a sudden pain in my foot or my toe but it comes, and then you know it’s – it’s quite quickly gone so it’s not like you’ve had it constant, and possibly if I’d been asleep I might have slept through it, but I’ve noticed it when I’ve been you know awake or been sitting or something and had the pain whether it’s gout or anything else I don’t know, if you have pains around your toes I tend to do think gout you know, whether it is or not I don’t know.

And when you say it sort of goes quickly are we talking seconds, minutes, hours?

Okay so it’s sort of very brief pain and then it goes away again. So when that happens do you do anything about it or do you just …