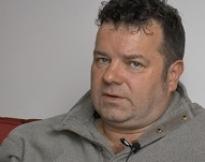 Brief Outline: Michael’s first attack of gout was about 14 years ago and he has had attacks in various different joints. He tried taking allopurinol but did not believe that it was effective, so he now manages his attacks by taking anti-inflammatories.
Background: Michael lives with his wife and three children. He works part-time as a Lecturer and also has a card franchise. Ethnic background/nationality: White Irish.

Michael experienced his first attack of gout about 14 years ago. He was driving through France on the way back from a holiday with his family, and his left knee started to get very sore. He did not know what had caused the pain because he had not injured his knee in any way. The pain got worse and worse, so by the time they reached England, Michael was not able to drive and his wife drove for the remainder of the journey.

When he got home, Michael’s knee was slightly swollen and he could not bend it. He went to bed but the next day he was still in agony. He got a taxi to the A&E department at the hospital. The doctor at the hospital was not sure what was wrong, so decided to have a look inside Michael’s knee. The medical staff found that there were uric acid crystals in his knee. Michael had to stay in hospital for five days of rehabilitation after the procedure.

Michael had never heard much about gout before, although his father had also had it. He was relieved to have a diagnosis, but he wondered why he had gout because he did not feel that he was unhealthy. He visited his GP who prescribed diclofenac for Michael to take during attacks, and allopurinol for him to take every day. Michael does not like taking tablets, but started taking the allopurinol tablets. However, he did not feel that they were effective because he was still getting attacks after taking the tablets for over a year.

Michael decided to stop taking allopurinol. He has chosen to deal with attacks when they occur, rather than taking preventative medication. He takes naproxen or co-codamol if he has an attack. He came across the names of these medications on internet forums where people have written about their experiences of gout. Michael asked his GP if he could try them because he did not feel that the diclofenac was particularly effective for him.

Michael was getting attacks about every six weeks, but his attacks have been less frequent in the last few years. He has had attacks in his toe joints, his ankle and his knee. He finds the pain particularly intense and debilitating when he has attacks in his knee. His attacks mostly start in the middle of the night, without warning, and last between two and three days, but sometimes they can last for up to five days. Attacks of gout stop Michael from doing activities such as cycling, walking the dog, driving and going to work. The pain makes him angry and upset, and he questions why it has happened to him.
Michael has found that if he begins taking medication as soon as he feels a twinge, before the pain has established, it generally reduces the intensity and duration of the attack. He also finds that an ice pack can be helpful to relieve the pain.

Michael has his own uric acid reader to measure the level of uric acid in his blood. He tests himself about once every six months and has generally found that his levels have been quite low. He has also had blood tests that have shown that his uric acid levels were normal.

Michael does not feel that he has made any major changes to his lifestyle, but he does try to drink more water than he would have done previously, and has reduced the amount of beer he drinks. He also takes cherry tablets and wears a magnetic bracelet. Michael has not identified many foods that seem to trigger attacks of gout for him, although he believes that eating shellfish has sometimes led to him having attacks. He also believes that dehydration has sometimes triggered off attacks of gout when he has been in a hot country.

It is important to Michael that he has a good level of knowledge about, and understanding of, gout. He found the NHS website and the fact sheets on the UK Gout Society website helpful, and he found internet support forums to be a useful source of information about how other people manage their gout.

Michael now gets attacks of gout about three times a year, but he has not had an attack for the last nine months.

Michael’s first attack started when he was driving back from France. The pain was unlike anything he had experienced before and he did not know what had caused it.

Michael’s first attack started when he was driving back from France. The pain was unlike anything he had experienced before and he did not know what had caused it.

View topic summary
SHOW TEXT VERSION
EMBED CODE
PRINT TRANSCRIPT
My first gout attack was about 14, 15 years ago and I didn't know what it was. We were coming back from France, been on holidays and basically driving through France and back into England and my left knee started to get very sore as we were driving. As I said, I didn't know what it was, but it was kind of unexplained. I hadn't hurt it or injured it at all. I thought maybe it was tired or stiff.

But anyway, as the journey went on, it got worse and worse to such an extent that by the time we got back to England I wasn't able to drive so my wife had to drive the remainder of the journey. I think that was on a Saturday evening and I was in agony. My left knee was in complete agony. I couldn’t bend it. As I say, it was, it was not like any sort of pain I'd had before. It wasn't particularly swollen. It was a little bit swollen, but it wasn't - there was no obvious signs of injury. It was very debilitating because basically I couldn't move it at all, so I couldn't walk properly and managed to get to bed. Anyway, the next day I couldn't - it was still in, in agony, so basically I sat myself down the stairs to get down the stairs and basically got a taxi to the hospital because my wife had gone to work. So sat in A&E, didn't know what was wrong but at this stage it was excruciating pain and I felt a bit silly really because I didn't know what was wrong with it.

Michael was relieved to know what was causing the pain. He questioned why he had got gout.

Michael was relieved to know what was causing the pain. He questioned why he had got gout.

View topic summary
SHOW TEXT VERSION
EMBED CODE
PRINT TRANSCRIPT
When I first found out I was in hospital because gout put me in hospital, basically. And I was glad to know what it was, obviously. I wasn't glad I had it. I didn't know much about it. As I say, it was - as I know, there's a lot of ignorance about it. There's a lot of, as I say, old wives' tales. So, you know, you don't - well, I never felt that I was particularly unhealthy or, you know, so you think well why did you get it or, you know, is it, is it hereditary? And, as I said, my father had it so it prob - it seems to me that it's hereditary. I'm not 100% sure, but it seems to me that it is. So yeah, you felt - you just feel a bit hard done by, basically.

Michael sometimes felt he knew more about gout than his doctor. He thought less information was given about gout because it is not life-threatening.

Michael sometimes felt he knew more about gout than his doctor. He thought less information was given about gout because it is not life-threatening.

View topic summary
SHOW TEXT VERSION
EMBED CODE
PRINT TRANSCRIPT
I don't think the doctors, my doctor here has been particularly helpful because I don’t think they - as I, as we said earlier, it's not life threatening. I'm not a critically ill patient. I suffer from gout occasionally. Get on with it, you know. I've been prescribed allopurinol. It's up to me if I take it or not, you know. They've done the best they can to that, that extent. And I think I actually know more about gout than some of the doctors there.

And is there any information that you'd like now but you still don't have?

I think on the, on the gout websites, they're helpful, you know, and they're good, they are a good support mechanism for people who use them. It's good - they're a good - it's good to be able to read about it and just see other people's experiences. And I think on the NHS website they've got little video clips of people talking about gout or different ailments. I think they're very helpful because it's very - it's a story, isn't it. People can relate to it more and other people can, you know, just understand it more if it's coming from the horse's mouth.
Previous Page
Next Page