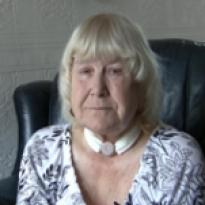 Age at interview: 71
Brief Outline: Val, 71, gave up smoking when she was 67. Val is White British, has an adult daughter and lives with her partner. She was diagnosed with throat cancer at the age of 67 and had a laryngectomy. Prior to the operation she took varenicline (Champix) for a short time, but now uses nicotine lozenges. Val now warns others of the dangers of smoking.

Val started smoking aged 21, when she says it was ‘fashionable’ to do so and there were no restrictions on where people were allowed to smoke. She says she enjoyed smoking, but did cut down and tried unsuccessfully to give up when her father passed away due to emphysema. Val was prescribed varenicline (Champix) by her doctor, but stopped taking it as it made her feel unwell, and she was concerned by reports in the media of people dying whilst taking varenicline. Val’s partner gave up and her daughter disapproved of smoking, so Val began to smoke in secret. She thought cancer was something ‘that happened to other people.’

Aged 67, Val experienced painful earache and took painkillers before visiting her GP. She was referred to the hospital where she was told she had cancer, following an examination of her mouth and throat with a camera. Val also had CT and MRI scans, and a painful biopsy in her neck, before then being told she did not have cancer. Two weeks later Val received the news that she in fact did have cancer and would need a laryngectomy. Val found this series of events very distressing.

Val says she smoked her last cigarette on the morning of the nine-hour operation to remove her voice box. She could no longer smoke following the insertion of a stoma in her throat and experienced withdrawal symptoms from smoking. Val could not talk for six months after the operation and found this frustrating. She could not eat for nine days whilst the wound healed, and lost weight as the liquid food upset her stomach. Val lost her senses of smell and taste as a result of the laryngectomy, but has now gained an altered sense of taste. She was concerned that the stoma hole would heal over in the night but the nurse reassured her that this would not happen. Val experienced low mood during the following months and says she felt alone and scared. Talking to a psychiatrist helped her during this period. Val found she was allergic to nicotine patches, but found nicotine lozenges helpful for the withdrawal effects of stopping smoking, and still uses them now. She has a check-up every six months and has the valve on her stoma changed every 3-4 months. Val is also diabetic and takes medication for this and to lower her cholesterol.

Val found it difficult to adapt to life after the laryngectomy. Her partner, daughter, sister and friend have been supportive throughout, and she says that her attitude has now changed to a positive one. Val wishes she had given up smoking a long time ago, but she feels optimistic about her future and believes having a sense of humour has been important. She previously thought that ‘cancer meant death’ but is now using her own experiences to help others, by appearing in a health information video to tell of her experiences of cancer and of life following a laryngectomy. Although Val did not attend any support groups at the time, since her operation she has found talking to others in a similar situation useful. Val recalls there being a lack of information during treatment and feels that talking to others can be a valuable source of support.

Val tried cutting down, which she now thinks is a big mistake. After a week of being bad tempered she was back to her normal amount.

Val tried cutting down, which she now thinks is a big mistake. After a week of being bad tempered she was back to her normal amount.

View topic summary
SHOW TEXT VERSION
PRINT TRANSCRIPT
I tried to cut down, which is big mistake, ‘cause I don’t think anybody can cut down. I think you’ve got to stop completely. And I’d stopped for a week; I’d be evil, nasty, bad-tempered, and in the end, I’d end up having another cigarette and then [exhales] off you go again on the same roundabout, you know.

And would you get any support for your attempts?

Oh yeah, ‘cause my children don’t smoke. Well my daughter is very anti-smoking, and when I used to, when I went to stop with my daughter, I used to walk down to the seafront to sit on a bench because she could smell a cigarette from ten miles. “Mother are you smoking?” And it made me feel so guilty, but I still couldn’t do anything about it.

And I mean, did you ever sort of try and hide smoking from anybody?

Tell me about that?

I used to have a crafty puff and then spray the house with scented spray and, open the windows and, wash the ashtray up, and that was when my partner thought I’d packed in.

So how much were you smoking when you were telling him you’d packed up?

Probably not so many but it didn’t last long.

Did he catch you?

No, not really. I used to go and sit on the bench behind the garage, there’s a bench, and you can’t see it from the house, and I used to go there, and bury the cigarette ends in me tubs, in me flower tubs. And then suck mints.

So you had it covered?

But I don’t think he was fooled for a minute because if you don’t smoke you can smell it on people, can’t you?

Val had a laryngectomy and says that no one thinks something like that will happen to them. It has been a struggle but she hasn’t smoked in four years and has saved £15 a day.

Val had a laryngectomy and says that no one thinks something like that will happen to them. It has been a struggle but she hasn’t smoked in four years and has saved £15 a day.

View topic summary
SHOW TEXT VERSION
PRINT TRANSCRIPT
What might be your message to them?

Well I haven’t smoked for four years. Not because - because I can’t smoke, it’s as simple as that. I’ve been, I don’t know what to say to people. Everybody thinks it’s not going to happen to you, but it could. And it’s not a very pleasant experience. It’s a real battle to get to the place I am today.

But I don’t think people’ll take any notice anyway. They’ve got to want to pack up smoking. Not only that, think of the financial gain. I mean I used to smoke 40 a day, that’d be nearly £15 a day in cigarettes every week, look at what it costs. And when you’re on a pension, that can feed you and pay your bills over a month can’t it. I couldn’t afford to smoke now.

Doctors irritated Val when they told her to give up smoking - she got sick of hearing about it.

Doctors irritated Val when they told her to give up smoking - she got sick of hearing about it.

View topic summary
SHOW TEXT VERSION
PRINT TRANSCRIPT
And did any health professional at any time talk to you about smoking?

Oh God every time you went the doctor’s, they’d say to you. “Do you smoke?” I think that’s what every doctor says to you. Or, “Are you a smoker? You really should try and pack up smoking.” So the time you get sick of hearing of it. But I never really had any illnesses.

So what would you think when doctors would say, you know, it’s time you should pack up smoking?

Just go in one ear and out the other.

Did you even used to feel irritated with the doctor and that?

Yeah, yeah, I used to think ‘oh that’s their answer to everything’. You know, ‘that’s the cause of everything ‘cause you’re a smoker’. And then you say one of my relatives lived till 90, smoked 40 cigarettes a day and he lived until he were 90. You get these examples of…

…you know. So I don’t know. I don’t know what the answer is. I think somebody should come up with a magic pill.
Previous Page
Next Page